Can globalisation survive the corona shock? 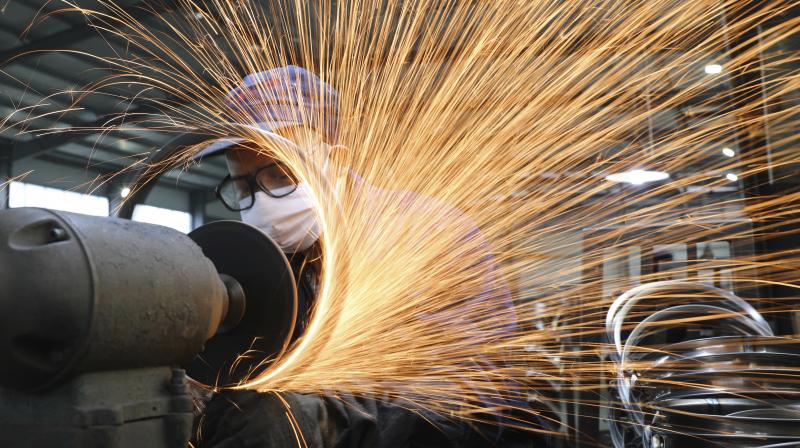 In this March 2, 2020 photo, a worker wearing a mask works at a factory producing bicycle wheel rims in Hangzhou in eastern China's Zhejiang province. (AP)

The spread of the coronavirus epidemic from China to at least 120 countries and territories has undercut activities, processes and ways of living like no other phenomenon. From economics and politics to culture and society, the virus has shaken the status quo and is pushing humanity toward new horizons.

Who could have foreseen that a virus transmitted from pangolins or bats to humans in a livestock market in China would reshape our core modes of being? In hindsight, it is all too obvious that a systemic jolt could only emanate from a systemically pivotal country like China. The adage, that “when China sneezes, the world catches a cold”, sounds frighteningly and literally true today, but it has been a reality building up over the past decade and a half.

During the 2003 Severe Acute Respiratory Syndrome (SARS) outbreak, China’s share of world economic output was just four per cent. Today, it stands at a staggering 20 per cent. If the panic caused by SARS was limited to China’s neighbours, the pandemonium triggered by coronavirus is global, with no continent spared from its menacing clutches. Wherever China has direct or indirect footprints or connections (practically every corner of the world), coronavirus has transmitted.

When a country which is a lodestone of globalisation -- the overarching framework enabling the free movement of goods, capital and people --goes off kilter, the ripple effects are so vast that globalisation itself is threatened.

As the number one outsourcing destination for manufacturing most categories of goods consumed on earth, China is interwoven into the arteries and veins of the global economy. The coronavirus-induced “supply shock” that is hammering giant transnational corporations in automobiles, electronics, pharmaceuticals and household durables is due to their overwhelming dependence on China’s industrial prowess as the “factory of the world”.

China’s nationwide lockdown and heavy-handed restrictions on travel and work since January have left so many factories closed and inventories lying idle that nations as geographically varied as Japan, Germany and the United States are staring at economic recession.

On the demand side, China is a voracious consumer of primary as well as finished products and services. Several countries of Africa, Latin America and Australia sell raw materials and agricultural products to keep China’s industrial machine humming and feed its 1.4 billion people. Makers of luxury goods like Louis Vuitton and famous tourist destinations like Venice also rely on China’s ever-expanding upper and middle-class demand. They are facing daunting downturns with no quick rebounds in sight.

Coronavirus could not have struck at a more ominous moment for globalisation. Barriers to trade, outsourcing and movement of people had already been rising as part of a populist nationalist backlash against the precepts of liberal globalisation. The trade wars unleashed by US President Donald Trump, the spasms of anti-immigrant pushback throughout Europe, and political movements to “take back control” of ordinary citizens’ fates from unfair and exploitative supranational financial and regulatory bodies had weakened the consensus underpinning globalisation prior to the deadly corona contagion.

Terms such as “de-globalisation”, “decoupling” and “regionalisation” of supply chains as opposed to globalisation had entered into parlance before the coronavirus embarked on its devastating sweep. The contradictions within capitalist globalisation, which were laid bare in the aftermath of the 2008 financial crisis, predated the corona scare. Yet, as Ian Bremmer of the Eurasia Group consultancy argues, coronavirus is “the largest global crisis since 2008”.

Globalisation has been stumbling through a dark alley with lowered legitimacy and mounting popular dissatisfaction about its distributive iniquities and dehumanising tendencies. Coronavirus has landed with a thud on this fragile structure and further exposed the imbalances and wrongs contained in liberal ‘one world’ and global integration roadmaps.

Fearful and stressed people who resent China’s domination of the globalisation processes have reasons to be infuriated at the reckless transmission of the virus caused by China’s opaque Communist Party’s cover-up of the epidemic in its early phase. China benefited tremendously by inserting itself into the heart of globalisation, but it has washed its hands off any responsibility to compensate the international community which is counting paralysing losses of life and wealth from the corona crisis.

China has internalised the profits of globalisation while callously externalising its harmful effects like disease and environmental pollution. International anger at China and its negative practices could ebb once the coronavirus subsides, but the errors of addictively buying from China and manufacturing in China have hit home in the world’s psyche. Diversification of economic strategies by nations away from China-centric globalisation is likely to be a logical consequence of the corona calamity.

Another major result of the coronavirus tragedy is the increased onus on nation states as the sole providers of safety and security for their peoples. In spite of pleas from the World Health Organisation (WHO) to respond in a coordinated fashion to the virus, the burden has fallen squarely on individual countries to shield their respective populations as per each nation’s domestic means, methods and political preferences. Export bans on medical items, travel bans on high-risk nationalities and sealing of land and maritime borders have curtailed the freedoms that accompanied borderless globalisation.

The absence of a commonly agreed and enforced set of norms and procedures across countries for diagnosing, testing, quarantining, treating and disinfecting coronavirus victims is glaringly visible. From a global governance point of view, what we are witnessing is pure chaos and disorder when the need of the hour is deeper international cooperation and integration to counter a deadly virus that is a quintessential “problem without passports”.

It is natural for liberal figures like the UN Secretary-General Antonio Guterres to proclaim that “global problems require global solutions”. But in a world where globalism is tainted, there are question marks about whether reverting to discredited globalisation will make matters better or worse.

Albert Einstein had said “problems cannot be solved by the same level of thinking that created them.” Coronavirus is indeed China’s fault, but it is also a reminder of unsustainable globalisation. This unprecedented public health emergency of modern times will surely hasten the replacement or reconfiguration of globalisation which has failed the tests of equity and justice.