Opinion   Oped  12 May 2017  Threat in J&K is beyond street turbulence
Opinion, Oped

Threat in J&K is beyond street turbulence

The LoC can take as much additional deployment as probably exists today, and yet the Army won’t give you any guarantee of zero infiltration. 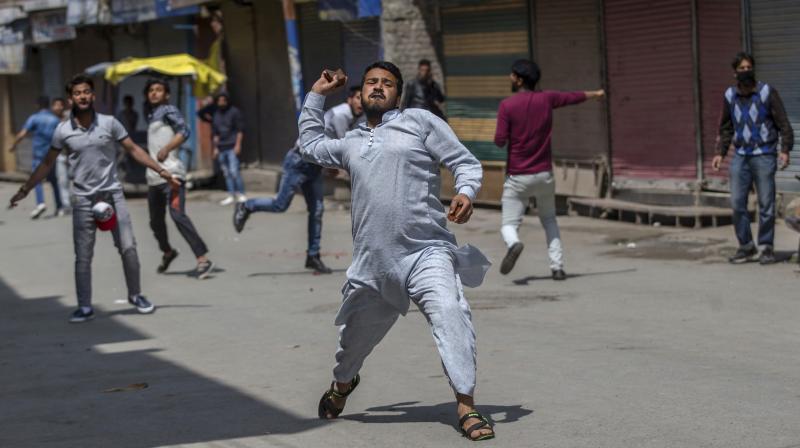 Public memory is usually short, specially these days when information is booming. It’s only a finite amount that the brain can absorb. Reminders are thus often necessary to understand issues regarding Kashmir, which though security-related often have far broader implications. Infiltration is one, and then there are fidayeen attacks, the terrorist term for suicide strikes — where do they fit in, how are they different from other forms of terrorism. There is also a vast network of financial conduits behind the scenes, without which separatist activity will come to a grinding halt. There is also a maze of links and structure to keep the information war in place and organise events that are needed to remain relevant. There is also the increasing propensity to target local Kashmiris linked to the police or the military. Answers to these questions are needed in the public domain to allow the people to appreciate the complexity of the situation in the Valley and the need to fight in different domains to defeat it. It’s not just young men in the streets with stones in their hands but the overall threat picture which will help people comprehend what exactly Kashmir is all about now.

As stones continue to be thrown at the security forces and mobs build up at encounter sites, it is important for Pakistan and its proxies in the Valley to promote other activities to support the street turbulence which has in the last nine months become the core activity to keep the proxy war alive. The low strength of terrorists (around 250 now) was the reason in 2008 for Pakistan and the separatists to select street turbulence as the means to remain relevant. Some say it was the Palestinian intifada that acted as the model. However, the inspiration had probably come from American thinker Gene Sharp, who in his seminal book From Dictatorship to Democracy had spelt out the “198 Ways of Non-Violent Revolution”. There is no doubt that someone in the adversary camp pulled out this book, dusted it and read it. He probably had it translated into Urdu and Punjabi and sent it across the LoC to the Valley. The philosophy of the second Palestinian intifada, the commencement of the first round of which predates the book by six years, also seems to have been taken from these famous lines of Gene Sharp: “As soon as you choose to fight with violence you’re choosing to fight against your opponents’ best weapons, and you have to be smarter than that.” It seems the Valley’s separatists took this rather seriously, tested street turbulence in 2008, awaited triggers for more in 2009, exploited those that came their way in 2010 and made stone-throwing a virtual art. About 2016, the less said the better. It’s not easy to explain to the public that in the international perception the stone versus the bullet is considered a non-violent weapon although both are missiles and have tremendous scope to cause harm.

It was the control on infiltration that triggered the hunt for alternatives like stone-throwing. The LoC fence constructed in 2003-04 provided the means to give counter-infiltration a fillip as did the ceasefire. Residual numbers of terrorists started reducing as more were neutralised in the hinterland and the LoC than could infiltrate. Now Pakistan would wish to give the terror angle another fillip as the sustenance of the street turbulence carries no guarantee; it’s so contingent upon public stamina and the antipathy that can be driven. A smart adversary carries out contingency planning for alternative courses should the ongoing successful course suddenly flounder. It is therefore infiltration which should be of major concern to the Army in the coming season. More innovations from the adversary should be expected; less employed routes, larger numbers to allow filtration with casualties, attempting difficult terrain and rogue actions against our LoC deployment to force stronger deployment, thus throwing open more gaps.

There is just one problem with strengthening the counter-infiltration grid. You can put any amount of technology for surveillance but the eventual stopping of the tracks is only by physically neutralising them. These are very troop-intensive operations and take up much energy. The LoC can take as much additional deployment as probably exists today, and yet the Army won’t give you any guarantee of zero infiltration. The counter-infiltration grid being optimised also has implications in the rear areas. Bases like Uri and Panzgam will then always be lightly-manned. The surveillance equipment, always in short supply, will be placed right up in front. That is why the scope for the other activity increases — fidayeen or suicide attacks. Teams of two or three terrorists, usually foreigners, focus on locating garrisons where the guard is lower and gaps in the security evident. If there are no security walls and just administrative elements deployed along with a few transients in dispersed barracks, the situation is tailormade for sneak suicide attacks. Panzgam was just that, and there can be many more. The dilemma should be evident. The same happened in 1999-2000 when J&K was hit by similar phenomenon; a revisit of tactics is common in such an environment. Then there was a flurry of activity to allot resources for security infrastructure. Hopefully it will be the same this time.

The November 2016 demonetisation did hit the separatist and terror networks quite badly, but they appear to have re-emerged. It’s possible that legitimate bank accounts fuel the movement, and there is little time for the intelligence agencies to focus on these, given that there are overground workers even in the banking networks to prevent clandestine checks. That is where the experience of the demonetisation exercise should come in handy. Big data analysis and large money transfers should come under the scanner. If lakhs of accounts could be put under surveillance for disproportionate deposits and expenditure patterns did not match earning profiles, such accounts could be placed under the scanner. Innovative ways of surveillance over financial conduits and neutralising them is the surest way to paralyse separatist activism. Trans-LoC trade, long suspected for its uncanny ways to beat the system, must no longer be treated with kid gloves.

The killing of five policemen, two bank guards and now a young recently-commissioned Army officer on leave, all Kashmiris, points to the direction in which the militancy is headed. The viciousness is likely to increase manifold and there will be no qualms about targets. In such an environment, the minorities and servicemen on leave are extremely vulnerable. It’s the State’s duty to protect them.

The information domain forms one more sphere by which separatists and terrorists have dominated the narrative. The Internet ban may not have neutralised all networks as alternatives seem to have been found given the high-technology capability of the new generation. This can’t be taken as the final position in terms of the State’s response, which has more resources to bank upon, including high-end technology and the backup of a vast IT sector. Not much thought has been given to this, although technology and capability can be developed if the State is willing to invest time, money and energy. There seem to be few takers for research on this, as data-handling and information are two domains which are emerging the new frontiers of hybrid warfare.