At last, in UK, India’s World War I heroes get the honour they deserve

The money raised from the sale of these special “commemorative flowers” goes towards the welfare of soldiers. 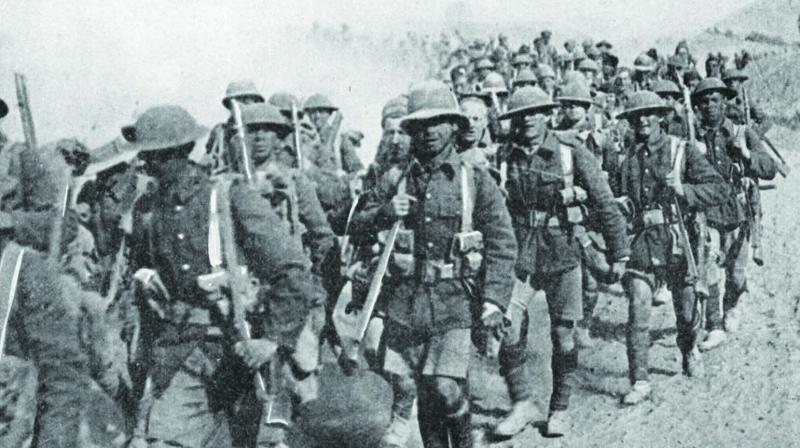 British troops on the march during Mesopotamian campaign in World War I (Photo: File)

This week, it is 100 years since the conclusion of World War I, and Britain is finally doing its bit to remember the Asian soldiers who died in European battlefields. Though over the years, there have been efforts to commemorate their contributions, it speaks volumes about the clout that Indians carry today, that, on this occasion, there has been an attempt to acknowledge the sacrifice of Indian soldiers. Even Prince Harry, the Duke of Sussex, freshly back from his and Meghan’s foreign tour, said that he would like to include marigolds in memory of the Indians who died when he laid a wreath at the Cenotaph on Sunday.

I personally do think that having marigolds instead of poppies is much more “Indian”, and it would be worth adopting this practice in India, too. The money raised from the sale of these special “commemorative flowers” goes towards the welfare of soldiers. This time some of the usual commemorative poppies have also been made of khadi as a tribute to Indians (and of course, Mahatma Gandhi), and these are being sold on the streets and worn with pride. It seems the idea of using khadi is for the flowers which originated from Lord Gadhia, and so he must be thanked as well.

Among the many ceremonies, the main one was at Westminster Abbey, attended by the Queen and her family, where church bells rang out as they did at the end of World War I. The British do commemoration services in style, and the royals get involved with great gusto. And for the centenary, sculptures and displays were specially commissioned: for instance, 10,000 torches in the dry moat around the Tower of London, which have attracted thousands of tourists.

But I must add that the commemoration activities have been planned for four years — and that is why they are always immensely successful. There is also an effort to involve ordinary folk, which is another essential aspect for anything to create an emotive impact. It is not about being an onlooker, but being actually involved.

One interesting installation, recently, was of a Sikh soldier, 10-feet-high, commissioned by the Guru Nanak Gurdwara Smethwick, in Birmingham, to mark the sacrifices made by South Asian servicemen of all faiths during World War I. I was surprised to learn that it is the first full statue of a South Asian World War I soldier in the UK. This is despite the fact that memorials have been created, previously — for instance, for the Gurkhas. Sadly, this sculpture of the Sikh soldier was vandalised over this weekend, The words “Lions of the Great War” were defaced. The police has not yet been able to identify the culprits — but the reality is that these could come from any community.

As we are aware (and as I have said it in my new book, Jallianwala Bagh, 1919, The Real Story), there was an uneasiness in participating in World War I in Punjab, even at the time, due to the coercion over recruitment, and the racism which existed within the Army ranks, where there was a marked difference in the way the British and Indian soldiers lived and were treated. However, this recent vandalism could have had many reasons, and is regrettable. It could have been a racist attack, or even a sorry attempt by other forces at play. This needs to be investigated — but we must learn from the lessons of history and respect the memory of all those who suffered and died, for the idea of freedom.

It was a surprise to see someone who is a friend (and a friend of India) resign from the Cabinet. Indeed, for many, Jo Johnson, minister for transport, quitting was a complete shock. Unlike his brother Boris Johnson, Jo has always been understated, rarely coming out to take credit for even those things which were his achievements. But the fact that he is unhappy about the Brexit deal makes many of us now more conscious that all is not well. He has said that it would be a democratic travesty not to have a second Brexit vote. If he is finding the Brexit deal “incoherent,” what would it mean to the British people? And why this reluctance to have a second referendum? After all, in a democracy, when people make bad choices — the ballot is the only way to set the record straight. It happens every five years, anyway, and even if this means that there is a risk that people might still vote for Brexit, at least there will be an effort to explain to them what it exactly means.

This actually, has been the biggest problem with Brexit. Many feel now that the ramifications of it had never been properly explained — and people voted thinking all it meant was that migration from Europe would be controlled. Now that they know the other implications, it might make more sense to go back to the ballot again .

Meanwhile, one is happy to see that Mira Kaushik’s “The Troth,” a dance presentation which is based on “Usne Kaha Tha”, Chandradhar Guleri’s short story, is winning accolades. It is also very timely as it is set in Punjab during World War I. Mira has been working away at popularising Indian dance in the UK, and it is so good to see her efforts bearing fruit.