Opinion   Oped  12 Dec 2019  Mystic Mantra: Can’t each of us see God and be God in loving and saving others?
Opinion, Oped

Mystic Mantra: Can’t each of us see God and be God in loving and saving others?

Seeking to capitalise from every crisis, politicians begin blaming each other. 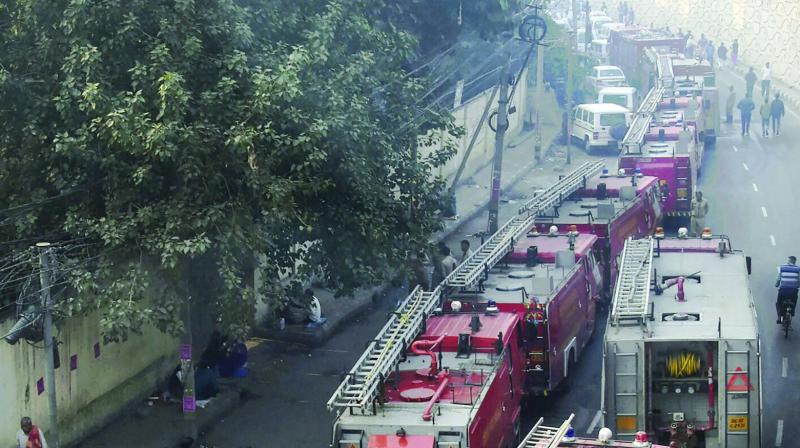 Commissions will be formed of men who individually can do nothing, and collectively will conclude that nothing can be done. (Photo: PTI)

Since Monday, two persons have etched imprints upon my brain. First, Musharaf Ali burned in Sunday’s Delhi blaze, and made his last call to his brother: “There’s no way now. I’m dying. It’s God’s will.”  Second, firefighter Rajesh Shukla ran into the inferno, saving 11 lives. Sunday, many must’ve said to God or Shukla, “Thanks for saving me!”

Post-tragedies, blame games begin. Seeking to capitalise from every crisis, politicians begin blaming each other. Commissions will be formed of men who individually can do nothing, and collectively will conclude that nothing can be done. Finally, some money will be doled out after widows and orphans fill scores of forms.

Fires, floods, famines and tsunamis leave us speechless. For many, “43” is a numeral, a statistic, microscopic among a billion Indians. But the deceased Ali and 42 others have left many fatherless, husbandless, sonless, hopeless; perhaps moneyless too, since they were migrant workers from afar, sharing factory space not only for backbreaking labour, but also for rest. They were slogging for kids’ fees, daughters’ weddings, or for Id, Diwali, Christmas.

What does Sunday, December 8, mean for those who cried out to, surrendered, or thanked some “God”? By “God” I don’t mean one particular deity, but every image of some Ultimate Being. What about agnostics and atheists who’d probably say, “Keep God out of this!” or, “Doesn’t this prove that God doesn’t exist?” Armchair believers or unbelievers might delight in debates and discussion. How about you?

For me, firefighter “Rajesh” — loosely translated as “god of kings” — is not just an individual but an archetype of the do-gooder, good samaritan, so to say, who rises up above crippling confines of class, caste and country to save others. Indeed, Rajesh could have lost his life in saving others. Rajesh could’ve rendered some folks fatherless, husbandless, sonless, etc. But his sense of duty and deep humanness fired his resolve to save those in need. Other anonymous “rajesh-es” also became “gods”: throwing water, giving wet rags, rushing people to hospital and so on.

Christians worldwide are currently commemorating “Advent”, from the Latin, adventus, meaning “coming” or “arrival”. Advent is a four-week preparatory period to welcome Jesus Christ, believed to be God’s son, who “came” into the world some 2,000 years ago, and Christians believe “will come again”. Meanwhile, can’t each of us see God and be God: in loving, serving, saving others?

God “comes, comes, ever comes,” wrote Tagore in Gitanjali — in dewdrops and teardrops, fire and rain, births and deaths. Just once, Saraswati, our teacher in a slum said, “We thought you were Christian, but my illiterate papa says, ‘You’re an avatar of Lord Vishnu’!” I’ve yet to receive a finer compliment.