The country's speedy, efficient and expert-led action, despite not having WHO membership, becomes a blueprint for infectious disease control 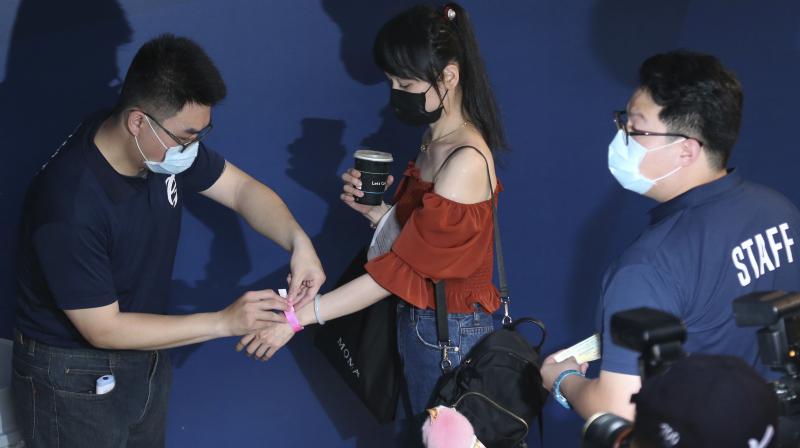 Baseball fans enter the Xinzhuang Baseball Stadium in New Taipei City, Taiwan, Friday, May 8, 2020. Up to 1,000 spectators are now allowed in the stands for baseball in Taiwan on Friday, albeit spaced far apart as a safeguard against the spread of the coronavirus, but they are still barred from bringing in food and concession stands are still closed. (Photo | AP)

In the fight to halt the coronavirus, several countries have been touted as models to be emulated. Chiefly, South Korea is oft cited, justifiably so. However, no country has met with as much success in holding off and beating back the virus as Taiwan, whose geographical and cultural proximity, literally next door, to China makes the feat all the more remarkable. Contained in this narrative are valuable insights for other countries such as India that are still in the throes of this pandemic.

Situated a mere 130 km off the coast of mainland China, Taiwan has 850,000 to 1 million citizens who live or work in China. Although Beijing and Taipei are adversarial regimes, numerous daily flights link the island to multiple major cities in China. Given such proximity, Taiwan would likely be the most affected by any epidemic with origins in China. In fact, it was the hardest hit when SARS broke out in China in 2003. Taiwan then had the highest mortality rate in the world.

That did not happen this time.

Taiwan's Covid-19 numbers have been surprisingly low, for a country that has 2.7 million visitors from the mainland annually and almost 12,000 daily just before the Lunar New Year. As of May 12, Taiwan has 440 total coronavirus cases, of which 372 have already been cured. There have been only 7 deaths. With less than 100 active cases, Taiwan has halted the virus at its doorstep. It managed all this in spite of not being a member of the WHO and while organising a national election on January 11.

How was this possible?

Remarkably, Taiwan’s strategy to combat the novel coronavirus nCoV19 was led by experts and scientists who responded with urgency to the initial outbreak in China. Taiwan’s vice-president, Chen Chien-jen is a Johns Hopkins University trained epidemiologist, public health expert and national hero for his role as health minister during the SARS outbreak in 2002 and the H1N1 outbreak in 2009. Similarly, vice-premier Chen Chi-mai is a physician by training and former lecturer who collaborated with Minister for health and welfare Chen Shih-chung, a doctor and former director of Taipei Medical University. According to Channel News Asia (CNA), at 8 A.M on December 31, the latter was informed of at least seven atypical cases of pneumonia in Wuhan. Within an hour an inter-ministerial meeting was held to determine the measures to be taken to tackle the virus.

This response was as agile as the response in Wuhan itself. Over the next few days, suspected-case reporting and hospital infection control measures were strengthened, a level-1 travel notice to Wuhan was announced, and by January 15 all hospitals and the public were notified about the emerging infectious disease. By January 20, Taiwan activated the Central Epidemic Command Center (CECC) to coordinate and lead the response to the virus. Daily briefings to the public conducted by health minister Chen Shih-chung, attended by nearly 100,000 people, were also important in keeping the public informed and aware. The health minister currently enjoys an approval rating of 91% in Taiwan and has become the country’s most popular politician, even more than President Tsai ing-wen.

Allowing public health experts to direct the response to Covid-19 meant that Taiwan could make a crucial connection very very early: that air travel was the main pathway of virus transmission. So, Taipei acted quickly to restrict and monitor air travel.

On December 31, the very day China reported the outbreak to the WHO, Taiwan began sending healthcare officials into airplanes to check passengers arriving from Wuhan before they disembarked. Within a couple of days, these measures were expanded to include fever screening and full-scale medical examination of suspected cases. Within 10 days after the flareup of the mysterious new virus in Wuhan on January 21, Taiwan closed its borders to all Wuhan residents, and by 6 Feb extended the restrictions to all arrivals from China, six days before any other country did so. Taiwan also issued a ban on all port calls by international cruise ships on Feb 6, to prevent more cases like the Diamond Princess. To monitor all foreign arrivals into the country, passengers were required to sign and complete a health declaration form. As the virus began to spread outside China to places like Thailand and Singapore, travel advisories were issued to these places by February 11. By early March, all foreign arrivals without a residence permit were banned from entering the country.

By strange coincidence or premonition, nearly a fortnight before December 31,
on December 18, 2019, in fact, an awards ceremony was held in Taiwan for airlines with outstanding performance in disease surveillance and aviation safety. At the same event, Taiwan CDC, the Civil Aeronautics Administration (CAA) and Occupational Safety and Health Administration (OSHA) announced their joint collaboration in implementing the Program for Airlines on Disease Prevention, Preparedness and Response, and Emergency Management, the first of its kind in the world.

Activated on January 20, the Central Epidemic Command Centre proceeded to implement a total of 124 measures so far, including but not limited to border controls and fever screenings. One of the most significant of these was, contrary to WHO advice, a ban on the export of face masks and a decision to increase the production of protective equipment. The ban came into effect on Jan 24, one month before any other country adopted the same measure. According to the Vice-President, by the end of January, Taiwan stockpiled 44 million surgical masks, 1.95 million N-95 masks and 1,100 negative pressure isolation rooms. A national mask team was set up and 92 additional production lines were installed and the government requisitioned a total of 73 manufacturing companies. The policy increased the average daily production of masks from 1.9 million in January to 16 million masks daily in April. The CECC also instituted a rationing system for masks, according to which every citizen could buy 3 masks per week, then raised to 9 every fortnight, and finally an online ordering system was instituted.

Taiwan’s lightning-quick reaction has undoubtedly saved hundreds of lives and prevented thousands more from becoming infected. The island managed this without ever announcing a lockdown and significantly disrupting domestic economic and social life. Taiwan is also able to avoid, to a certain extent, the economic slump that follows a lockdown. Agencies like S&P and other economists have revised Taiwan’s GDP for 2020, but by a smaller margin than any other industrialised country. Schools, offices, restaurants and malls have remained open through the outbreak, limiting the disruption to the economy. Additionally, the island’s approach of involving the public in the fight against Covid-19 has the additional benefit of inculcating awareness in its public, making a transition to the new normal much smoother. With just 65 active cases left, Taiwan has turned its attention to other countries struggling to contain the virus, with the campaign TaiwanCanHelp, which donates masks and other resources.

Most of Taiwan’s measures to combat Covid-19 were announced in late January and early February, taking effect almost immediately. The credit for this accrues to experts and scientists holding political office, who lead the fight against Covid-19, calling the shots and responding to developments in China almost instantaneously. The promptness in enacting these measures has been shown by no other country. While some countries like India were busy hosting grand bilateral summits for foreign leaders and others like USA were turning the virus into a political weapon, Taiwan was preparing for the Covid-19 outbreak, which has held the country in good stead in the months following the initial stages of the outbreak.