What can we do about our vanishing values?

Instead of living in a “gilded age”, we could, through a robust value system, embark on a golden age in India. 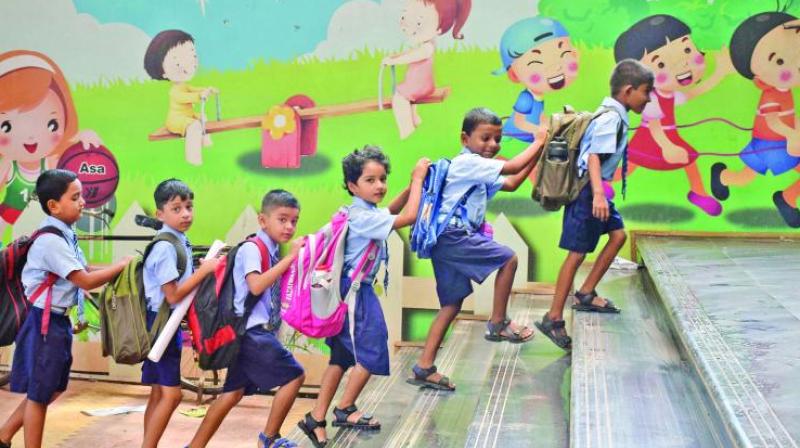 Value education and moral science classes are conducted in schools. And seminar after seminar is held on “value-based” education. (Representational image)

It is true that every generation laments the deteriorating values of the next generation. This is understandable because of the changing norms, outlook and worldview of the young. However, the glaring absence of values that is witnessed around us today is less to do with the generation gap and more to do with an almost countrywide epidemic which is reminiscent of “dark” times in human history. It is ironical that many perceive the current period as the “new gilded age of India”. Perhaps it is because from just two billionaires in the early 1990s, the number of billionaires in our country has risen to over a hundred. Indeed, India, according to Forbes magazine, is the fourth country in the world in terms of its number of billionaires. The dark aspect is that India is the second most unequal country in the world. Surely, there is something very wrong in the way India is growing.

When young parents ask me repeatedly how they or the school can instil values in their children, I realise that in the current scenario it is an onerous, if not impossible task. Because no matter what parents and teachers tell their children, it is what they see and hear around them that is going to shape their value system. I still remember how a Class 8 student had left me nonplussed when she remarked that you had to be corrupt in order to survive these days. She went on to say that her father, a businessman, had to bribe the boiler inspector every year in order to get a “clean chit” for his factory to function. Another student piped up to say that her uncle had to supply cricket match tickets to a powerful official and his family members in order to procure a licence. Everybody, including the children, knows that these practices are widespread and have become almost a way of life with us Indians. It is always whom we know in the corridors of power rather than our qualities that help us to achieve our goals. Thus young people, as they grow older, and wiser, soon learn how “to work the system”.

Nevertheless, everyone today shows deep concern not only about corruption but also about lost values. There are certain bases of right and wrong that are perhaps perennial and certain marks of courtesy, civilised behaviour and culture that go with every age. But when we read the newspaper, watch television, access the social media, and observe the behaviour on the street, in crowded buses or shops and even in Parliament and the courts, we see very little evidence of values. Yet gurus and babas abound to promote spirituality. Value education and moral science classes are conducted in schools. And seminar after seminar is held on “value-based” education. Religion has suddenly become exceedingly important to individuals as well as groups, but deep wrongs are perpetrated in its name. In a perverse way, religion has become one of the fastest tracks to power and wealth. This state of affairs has much to do with the rapid pace of commercialisation, resulting in easy money, greed and the lust for power. Shameful disparities are compounded with poor primary education, and inadequate educational institutions. Finally, the crying shortage of jobs leads to many evils in society.

Coming to the genuine desire of parents and school educators to nurture “good human beings”, what should we be doing? First of all, the definition of a “good” person is not clear. A dishonest person can be kind and generous and a truthful person can turn out to be unpleasant and hurtful. And surely we don’t equate “goodness” with passive obedience. So, a parent’s or a teacher’s task is very complex, to say the least. An infant is born pure and innocent. How does it grow up to be untruthful, covetous, dishonest and grasping? One school of thought is that it is a blend of heredity and environment. I would tend to believe that it is almost wholly the environment that shapes our values. There is this dangerous trend today, for instant gratification and for “success” at any cost and by any means. And the same young parents who question you about developing values soon enter the big, bad, rat race — and all becomes “fair” in the name of competition.

If you stop to think about strict honesty, you will not find it anywhere. It is because the line between “right” and “wrong” has become so blurred that it is almost invisible. The protective shield is that “everyone is doing it”. Take, for instance, mass cheating in an examination hall. “Why should we suffer,” they ask, “when others are getting away with it?” A teacher wins a hefty cash prize for her school in a lesson plan contest. She feels proud of her achievement and savours the praise of her colleagues until someone asks: “But what’s in it for you?” Schools give exaggerated letters of recommendation and inflated marks to students who are trying for admission in prestigious institutions abroad. They don’t worry too much about accuracy as they feel that their responsibility is towards their students, and their own name and fame.

So how can this erosion of values be stemmed? Just lectures, admonitions and prescriptions won’t do if we really wish to retrieve our vanishing values. Children must be encouraged to discuss among themselves what is right or wrong in a given situation, and reflect on the reasons why they are perceived so. Meanwhile, we adults must be living examples of integrity — we must practise what we teach and walk the talk. Young people have to be shown the way to live in harmony with others, but they must have the courage to speak up for their principles and protest against wrongdoing. What is most needed today is the courage to give up shortcuts and questionable gains and to strive for a more equal world.

Instead of living in a “gilded age”, we could, through a robust value system, embark on a golden age in India.