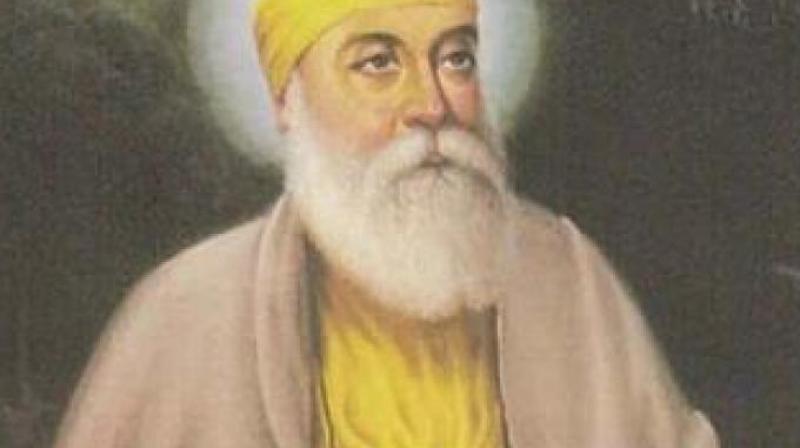 Once there was a drought in a village where Guru Angad Dev was living with his family. One sadhu instigated the people against the guru and predicted that there would be rains only when Guru Angad left the village. The Guru did not believe in performing miracles and a humble man as he was, he replied, “Nature has its own ways and cannot bend as per the wishes of the human beings. But if you believe the rain gods will be happy by me leaving this village, I shall do so without any hesitation”. But still no sign of rains in the village but it rained in the village where the Guru had shifted. The villagers asked for forgiveness and implored him to return to the village.

Guru Angad says, “you should show endurance in the face of adversity like the earth, steadfastness like a mountain and compassion like a river. For the wise and the holy, it is unforgivable if they practice not humility and remain not even-headed in weal or woe'.

Guru Angad, the second Sikh guru, was born on 31 March 1504, in the village of Harike. He was named Lehna by his father, Pheru Mal, and mother, Mata Ramo. His father was a trader but Bhai Lehna worked as a priest. He was a devotee of goddess Durga and his  spiritual journey from sargun (with attributes) to nirgun (nirankar, without attributes) is equally interesting.

One day, Bhai Lehna heard the recitation of a hymn of Guru Nanak from his neighbour, Bhai Jodha. His mind was captivated by the melody and words of the Bani. His heart was filled with blissful joy. On his annual pilgrimage to Jwalamukhi temple, he decided to visit Guru Nanak as well. He mounted his horse and went to Kartarpur to meet the Guru. As he was proceeding to the village he met a person whom he asked for the way. The man took the reins and guided him to the destination. Once inside the dharamsala, Bhai Lehna was astonished to see the same old man. When he asked for forgiveness, Guru Nanak replied, “I simply led you to where you belong.”

Guru Nanak asked Bhai Lehna his name. When he said, “Lehna” which means “to take”, Guru Nanak affectionately replied, “te asi dena” (hence we have to give). Dena, in Hindi and Punjabi means “to give”. Bhai Lehna was a transformed man and became the Sikh of Guru Nanak. “He who has been blessed by Guru Nanak is lost in the praises of the Lord. What could one teach those, who have divine Nanak as their Guru?,” says Guru Angad.

Guru Nanak gave Bhai Lehna a new name, “Angad”, which means a part of one’s body. As the successor of Guru Nanak, Guru Angad led the Sikh tradition forward by visiting all the places associated with Guru Nanak and establishing dharamsalas all over the places. He focused on the teachings of the Sikh religion and continued the traditions of nam-simran, seva and langar.

Guru Angad warned the Sikhs against the ill-practices of greed and accumulation of things. He writes, “They know they have to depart, so why do they make such ostentatious displays? ...O Nanak, it shall not go along with him, and so he regrets.”

Guru Angad is credited with inventing the present form of the Gurmukhi script. He contributed 63 shabads to the Guru Granth Sahib. He was a spiritual as well as a practical man who emphasised on the physical well being of the persons. He started the tradition of “Mall Akhara” to encourage the Sikhs to remain fit and strong. He encouraged the Sikhs to be fearless all the time as he says, “those who have the fear of god, have no other fears.”