360 Degree: From ALT+Right to Halt Right 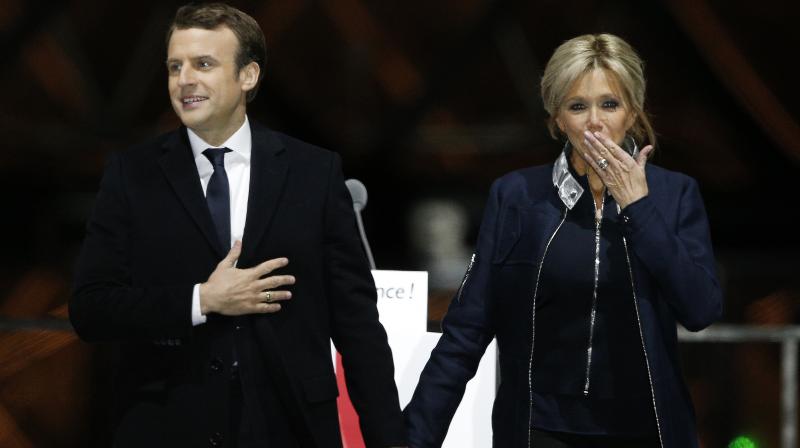 French President-elect Emmanuel Macron holds hands with his wife Brigitte during a victory celebration outside the Louvre museum in Paris. (Photo: AP/File)

Have the liberal values and ideas that the West held up as ideals after 1945 lost their appeal to create and hold communities together in their own countries? For the last couple of years there has been a worrying trend in European and more recently in the US elections that brought sharp focus to the shift in political values to the far-right of centre giving birth to what has popularly been called the Alt Right (Alternate Right — which is strange mix of far more radical extreme right that endorses extremely narrow identity politics), thus signalling the shift from liberal ideas to the rise of illiberal politics in Europe.

The rise of the National Front in France, the Party for Freedom in The Netherlands, the Alternative fur Deutschland in Germany, Freedom Party in Austria, Lega Nord in Italy, Vlaams Belan in Belgium, Danish People's Party in Denmark, True Finns in Finland, Sweden Democrats in Sweden, Jobbik in Hungary all point to growing and thriving rise of populism across Europe. As some of these parties have seats in the national parliaments and been in government further signaling the shift in decision making. What is contributing to the changing political landscape of Europe?

Is alienation truly a product of globalisation or a complex matrix of identity, economics and mobility that the Alt Right politicians have conveniently employed to produce stereotypes and divisions in the society? The rise in populism in Europe has eroded the liberal values and fear drives the new politics all round the world that seeks to herd the people together in tight identities. The Alt Right finds fault with immigration and economic policies and this fear of the foreigner, the migrant, the refugee and religion unleashed by the Far Right has got legitimised in the eyes of the people given their electoral gains.

The year 1957 brought unity to a ravaged Western Europe through the European Economic Community (EEC) indicating the ability to organise politics differently as the rest of the world marched to nationalism. In 1992 with the end of Cold War, the EEC transformed into the European Union (EU) and expanded to 28 Member States, overcoming the division of Europe, with many states adopting a common currency the Euro, the common Schengen visa regime and a common foreign and security policy.

EU's challenges in recent times have come from the Eurozone crisis and the refugee crisis since 2015 that swelled in 2016 and both together turned the tide also in domestic politics. A political backlash to the influx has meant that nationalism has re-emerged across Europe dividing people, politics and states. It is the same nationalism which destroyed Europe twice in a short span of 20 years in the 20the century. Growth of anti-immigrant rhetoric has spawned insecurity among the people and the Alt Right has fed the frenzy of an identity breakdown in which local media and social content has contributed to feeding the fear. Has politics lost touch with the reality, or reality as presented by fake news easily being accepted by people everywhere? The rise of identity politics has fed the growth of the right-wing parties to offer solutions that if the immigrant is stopped then all the social, political and economic problems would also disappear.

Europe is a divided home between the integrationists and the nationalists and cohesion for political action and solidarity are the victims. The post 1990 generation in Europe has only experienced the long peace and the dismantling of borders and a growing prosperity in which solidarity is taken for granted. However, the impact of globalisation on economy and the rise of conflict in other parts of the globe, especially in the Middle East have created new vulnerabilities for Europe, bringing thousands of refugees at its doorsteps and challenging its political assumptions and the liberal space.

The influx of over a million refugees in 2016 from the Middle East put more pressure on EU borders and the Dublin convention that regulates asylum thereby feeding the growing anti-immigrant feeling and position of the Alt Right Parties. Each recent terrorist attack - 2015 Paris, 2016 Brussels, Nice, Berlin, 2017 Stockholm, London, Paris have only hardened the Alt Right political positions fuelling anti-immigrations and minority protests. The big challenge is the shrinking of political space to debate issues as Islamophobia has grown and so has the shift in the discourse on multiculturalism in Europe.

Growing polarisation in Europe has boosted the far-right parties in electoral politics cutting into the support of the traditional parties and creating more political fragmentation. In Germany the rise of the Alternative for Deutschland (Alternative for Germany) can directly be attributed to this. Till three years back it did not exist and now has a presence across 10 States in Germany. Chancellor Angela Merkel's famous statement at the height of the refugee crisis in 2016 'Wir schaffen das' (we make it) propelled the AFD to get more support. The subsequent change in Merkel's position to stop taking refugees also reflected how ill prepared the country was to deal with the large numbers. The EU response to introduce national quotas for the refugees has not gone down well with all the states, but the numbers of refuges coming into Europe has dwindled significantly due to a deal between the EU and Turkey.

The June 2016 Brexit vote was the first big shock to the collective solidarity of the EU. Followed by the victory of Trump and his assuming office in January 2017, the churning of European politics became even more acute. It gave support to the idea that the unthinkable was possible and further boosted the morale of the far-right parties that their moment had come and the political tide would change as it did in America.

Since the start of 2017, the focus has been on the election calendar across key countries of the EU - The Netherlands, France and Germany. The outcome in each of these key elections is a litmus test to the political project of the EU, the values discourse, the space for the liberal ideas and an indicator as to how the electoral space which was being reconstituted by the rise of the rise of the Alt Right political parties. The defeat of the Alt Right leaders - Geert Wilders in The Netherlands and Marine Le Penn in France and the election of Macron as French President showed that significant number of voters did not succumb to the populist mantra and voted to halt the tide. Both countries are the founding members of the EEC/EU and the outcome for the future of liberal values and collective action would have been detrimental if the Alt Right had won.

Germany will vote in September and all eyes will be on that because a strong Franco-German partnership is seen as necessary to take Europe forward. For the EU to secure its external borders it needs collective action, cohesion and the political will to address growing challenges to its solidarity. How the political leadership of today lead their own people and Europe collectively is of paramount importance for their future.

The EU is at a historical crossroad, raising questions about the possibilities for it to forge a new contract and a new cooperation - one that is more tolerant, inclusive and visionary as well. The European political geography has changed - new equations have come up and there is a break in the partnership and there are competing visions of Europe and external threats or challenges no longer enhances solidarity as it did in the past. National identity and interest, which had been melded to create the European project, seems to have come a full circle. Consequently, a growing rejection of the common and return to the future of the national was very distinctly seen in the response to the refugee crisis. The march of populism in Europe has seemingly come to a halt with the elections in The Netherlands and in France. But while it prevented the far-right from getting into office, what cannot be ignored is the increase in their support margins which is a strong indicator how the Alt Right is creating more cleavages in European society and politics.

The growing trend of populism and polarisation across Europe is a worrying sign as the space for liberal ideas and values shrink and create a worrisome identity politics that no longer has the ability to shock Europe. Creeping Alt Right ideas and politics has come to find a place in the everyday discourse of society and state and representation in institutions, underscoring that liberal policies will be the next frontier of attack. In the early 1940s, there was a collective cry to wipe out fascism in Europe. However, that effort left Europe divided and locked in Cold War politics for four decades. Over 100 years since the start of WW I the takeaway for politics in Europe today is it cannot return to zealous nationalism that destroyed it and in that lies a lesson for all countries that acute politics of identity can only destroy but not create a community.