If men were going to be so unidirectional, women too were beginning to experience things they called freedom. 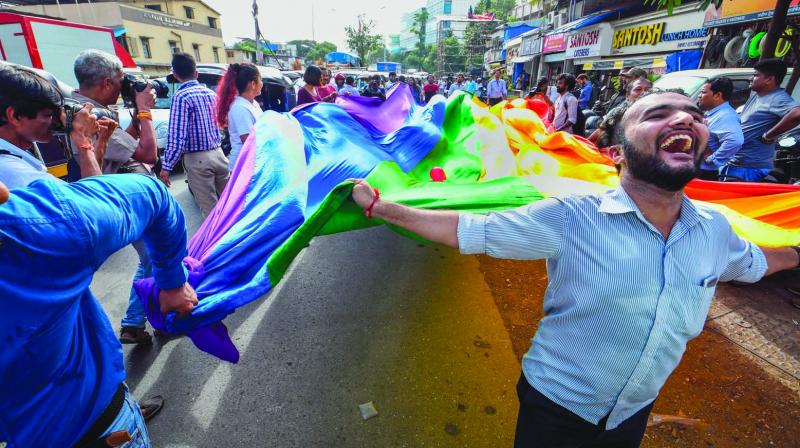 If there were no Article 377 in the decades before and after Partition, would Anjuman-e-Jaanbazgan (society of the valiant) been an open, registered organisation in Hyderabad? It probably would. In fact, as long as the feudal hangover lasted, such societies operated in Delhi, Lucknow and Rampur — almost everywhere, but they were underground.

These groups were led by “baankas” or dandies who groomed young boys into sex. Secrecy was imposed subsequently on these groups by Victorian morality, which expanded in direct proportion to the colonial order.

The motto for love life in the days of latter Mughals could well have been borrowed from ancient Greece. “Women are for business; boys for pleasure”. This imbalance is very much at the heart of Ismat Chughtai’s 1942 classic Lihaaf, or Quilt. The protagonist is awestruck at the Quilt rising like an elephant. Obviously Begum Jan and her maidservant, Rabbo, were reaching their climax. Begum Jan’s need for assigning extracurricular work (masseuse) to Rabbo arose because Nawab Sahib was, after a fashion, more inclined towards other men. This cyclical sport was side by side with straight relationships. Segregation of the sexes was clearly promoted stag binges. Neither psychiatry nor medical science had yet detected hormones determining sexual orientation. But gay activity was not worn on sleeves, even though it had acquired social acquiescence.

The latter Mughal period was a paradise for gays. This paradise was lost with the coming of the British with their Victorian baggage. While anti-sodomy laws pushed the gay community into secrecy, Western education opened up other areas of enlightenment too. Women’s liberation among them. Ironically, this led to the multiplication of gays for peculiar reasons.

Aggressive women’s movement, in its turn, liberated to a point where men began to nurse nostalgia for good old romantic femininity.

“Motia hiraye gayee, Rama
Kaise dhoon dhoon, (search)
Dhoondat, dhoondat,
baorae gayee, Rama”
(I have lost the pearl, my father’s gift,
O’ Rama, how to find it?
I am going mad searching
for it.)

The pearl has been lost in a moment of passionate ecstasy.

This raw ecstasy in the folk song is not the stuff of sex today — when urban emancipation conditions sexual behaviour.

“Goosebumps of joy appeared on her limbs,
Mistaking them for insect bites
I hastened with a jar of ointment.
But when she smiled I
guessed the truth
and stayed my hand.”

Even Ghalib (1797-1869) puts his urbanity aside in her presence.
“Is nazakat ka bura ho, woh
bhaley hain bhi to kya
Haath aayein to unhein haath
lagaye na baney”
(Though wonderful she be, I hesitate to touch her, such is the delicacy of her form.)

Raghupati Sahai or Firaq Gorakhpuri (1896-1982), describes:
“Woh hai ghuncha, ghuncha jo dekhiye
Woh hai choomiye to dahan dahan.”
(Look at her, and she is a half open bud.
Kiss her and she is all mouth.)

This is a report from a situation of docile submission, not aggressive emancipation.

John Keats in his letters could address Fanny Brawne as “My dear girl”. Try the patronising tone on the professional MBA you are trying to date and she will hurl a paperweight at you.

There were other digressions. For instance, folks travelling to England for the first time in the 1960s were recipients of a tract from the British high commission listing the dos and don’ts. Among the don’ts was a paragraph in italics: “A single woman may invite you to her apartment for tea and refreshments. This must not be taken for license.” Journey was being undertaken by men from backgrounds of sexual segregation. That the tract did not warn one about the risks of accepting gentlemen’s hospitality was presumably because Victorianism had not quite faded in the ’60s.

In those days the androgynous appeal of Twiggy, the modelling sensation, was the big draw. The fashion industry had marketed flat-chested girls, looking like boys, as the new sex symbols. The trend had been initiated by the haute couture in Paris. Balenciaga and Givenchy were in love and presumably had copious sex too, as did others in that business. You were a square if you were straight.

If men were going to be so unidirectional, women too were beginning to experience things they called freedom. All generalisation are hopelessly inadequate. The freedom was in fact a device to protect self-esteem, increasingly bruised by the casual indifference of men. Women’s emancipation clashed headlong with the “femininity” which poetry, thumri, folk songs and love letters had burdened our aesthetics with for centuries.

The emancipated, professional woman is light years away from the village belle who lost her pearl during sex. In asserting her gender equality does the contemporary woman cause her partner to feel inadequate who then begins to withdraw from women for emotional security? In brief, the belle who lost the pearl is more relaxing; the emancipated woman is more challenging.

Freudian complexities, which attend evolving man-woman equations, causes some of the youth of both sexes to find greater comfort, relaxation and friendship in seeking out persons of their own sex for all-purpose relationships. The withdrawal of men from the market causes women to move in the other direction.

This sociologically conditioned augmentation of the LGBT community is only a fraction of those who are gay or heterosexual for hormonal reasons.

Social reasons for this increase will cause the stream to join the torrent, a function of many streams, which could lead to unsettling demographic changes.

The Supreme Court judgment brings out of the purdah which was hidden. Does a whole body of poetry on that which was behind the curtain become kosher too? It is great poetry from Chaucer and Iqbal to Jafar Zatalli, Chirkeen, Rafi Ahmad Khan, Mahshar Enayati, Abba Changezi, Uriyan Hyderabadi. Do we have their lordship’s permission to bring it all out in the open?