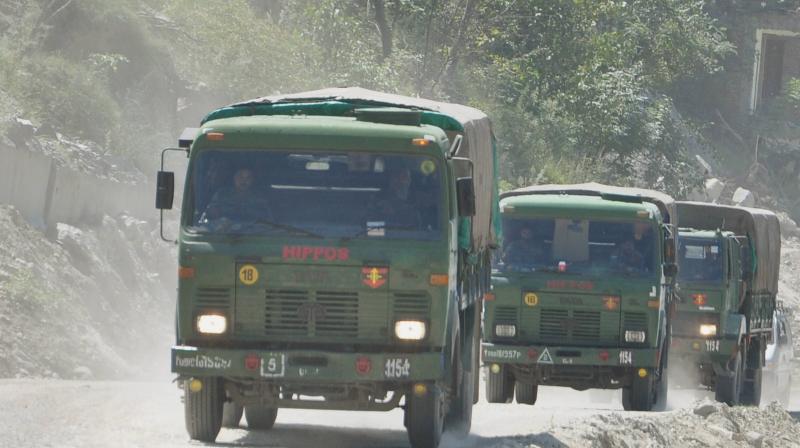 The fire that was lit by the Chinese in the Galwan Valley on June 15 continues to smoulder in eastern Ladakh.

The worst incident of violence on the India-China border since 1967 claimed the lives of 20 Indian soldiers. Several weeks later, many efforts to resolve the situation are yet to yield the desired results.

This is the second India-China standoff in recent memory. The tussle between the two militaries in Doklam in 2017 is still fresh in our memory. The Chinese attitude towards India has been evident for years, if not decades. Covert Chinese backing for anti-India groups in the Northeast has been known for long.

The China-Pakistan Economic Corridor, its tight embrace of Pakistan, including support at the UN for Pakistan-based terrorist Masood Azhar, are mirrored in its ant-India activities elsewhere in our neighbourhood.

Each of India’s neighbours is vulnerable to Chinese stratagems: Nepal, Myanmar, Bangladesh, Sri Lanka, the Maldives or Bhutan.

China’s aggressiveness isn’t restricted to India’s neighbourhood. Its activities in the South China Sea have alienated much of Southeast Asia, and raised alarm bells in several Western capitals. Its bellicose approach to Taiwan hasn’t gone unnoticed in Washington or elsewhere.

Even worse is its approach towards Hong Kong, where it is systematically undermining the “One country, two systems” principle, which was the basis for the governance of Hong Kong and Macau since they became China’s Special Administrative Regions in the late-1990s. Britain has taken the lead to speak out against the draconian security law that China imposed on Hong Kong in July.

Human rights violations across China are another issue that bothers the West. The heavy-handed tackling of unarmed protesters in Hong Kong was brought into the world’s living rooms by international TV channels. The treatment of Uighur Muslims in Xinjiang province has alarmed not only the West but also Central Asia.

China has demonstrated a voracious economic appetite. Of late, it has increasingly given direct loans and trade credits to developing nations, much beyond their capacity to pay back.

One report claims it has given $1.5 trillion in such loans and credits to over 150 countries, and more than 50 developing nations owe more than 15 per cent of their GDP to China. It eyes the assets of nations unable to service their debts, though the Chinese media denies this.

China’s approach to trade is no less aggressive. The United States and China are engaged in what is described as a trade war, while European and other countries are concerned over China’s single-minded approach.

Chinese companies like Huawei and many Chinese apps are increasingly attracting greater scrutiny. India, too, has taken action to ban several of these apps.

While disliking China’s political and economic approach, most countries have looked the other way due to their growing dependence on Chinese finance and investments.

The tipping point may have been reached as the world struggles to cope with the human and economic impact of the coronavirus that has brought most developed countries virtually to their knees.

India faces a challenge from China on its borders. It also has an opportunity to engage with a world that is increasingly uncomfortable with China’s actions. The engagement among the “Quadrilateral” (India, Australia, Japan and the US) has been revitalised. It is time that the “Quad” is expanded to include Britain, that has a direct interest in Hong Kong and is a long-time maritime power.

In addition, Britain has a good understanding of this region. France can similarly bring greater depth to this initiative. Closer coordination between the Quad and Southeast Asia must also be on our agenda.

Our engagements shouldn’t be limited to the Indo-Pacific; strengthening ties with Central Asian nations should also be an important objective.

These efforts shouldn’t be seen or projected as “anti-China”, and such coordination is vital to maintain secure and peaceful maritime movement in the Indo-Pacific. It could benefit development of the “blue economy”, studying the impact of climate change and disaster relief and management. Our engagements with the Quad also shouldn’t be seen as a panacea for our border problems with China.

We must resolve the current situation with China through dialogue, but our engagement with China must firmly convey our resolve to defend our sovereignty. India’s preference for peace should not be mistaken for military inability or unwillingness. This “red line” must be understood by the Chinese.

Within the bounds of this position, the creativity of our diplomats and policymakers can try and find a solution that is acceptable to both sides and which the Chinese leadership can take back to their people without appearing to have surrendered or backtracked.

In war and diplomacy, it is always advisable not to open too many fronts simultaneously. The Chinese seem to have opened too many fronts. Despite its strength and power, China today seems to have few friends in the world.
It’s efforts to encircle India may have had dubious success, but its own overambition, bordering on arrogance, has led to the near encirclement of China itself.

Is it an arrogant misjudgement on China’s part, which made it supremely confident of handling such widespread unhappiness of its actions across the globe? Somehow, it’s difficult to accept that Chinese policymakers could have been so naïve.

Some blame internal struggle and dissonance within the Chinese leadership for the current overstretch. Others point to the centenary of the Communist Party of China next year and the desire of the leadership in Beijing to deliver the Chinese vision of itself as a great superpower at this important landmark.
Covid-19’s appearance as China is preparing to deliver this vision; its actions in Ladakh and other places while the rest of the world is preoccupied with the Wuhan virus could be a coincidence, unless the macho Chinese behaviour in Ladakh and south of its borders is aimed at diverting the attention of its own people.

China is busy spreading its wings. From Hambantota to Gwadar, from Djibouti to Greece’s Piraeus Port, and now its efforts to establish its footprint in the islands of southern Italy, combined with its increasing assertiveness in Hong Kong, the South China Sea and Ladakh, paint a picture of a China that has decided its time has come.

India must remain on guard, both militarily and diplomatically. When it comes to the crunch, our battles are our own!