The Citizenship Amendment Bill offers these people cover and will only specifically exclude Muslims. 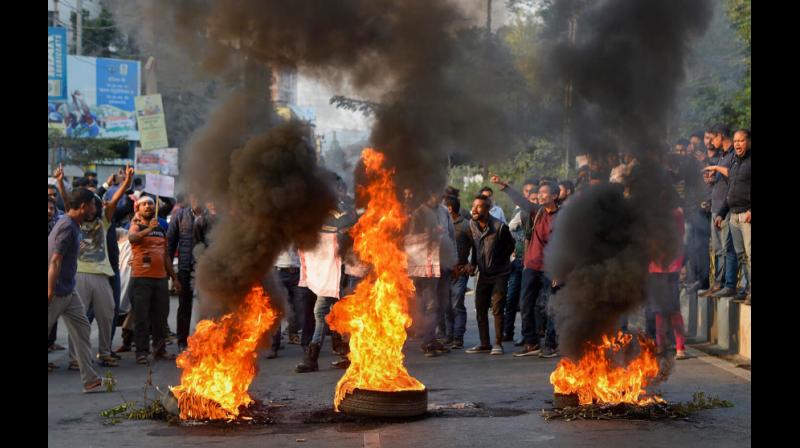 Tens of thousands of protesters against the CAB descended on the streets of Assam, clashing with police and plunging the state into chaos of a magnitude unseen since the violent six-year movement by students that ended with the signing of the Assam accord. (Photo: PTI)

An old and proud country votes to choose a policy that is against immigration. The majority of the country in the heartland is firmly behind the party that is campaigning against immigrants and using strong language against them. But there is trouble in the smaller states. They disagree with this policy strongly. So strongly in fact that the election produces a division that is akin to secession. This is of course the story of the Brexit election whose results were out this week. The United Kingdom is so-called because it is the union of four nations: England, Scotland, Wales and Northern Ireland. The first three of these nations are on one island, called Great Britain. The last is part of another island, and joined physically to the Republic of Ireland.

In the referendum of 2016, England and Wales voted for Brexit, meaning they wanted to leave the European Union. Northern Ireland and Scotland voted against Brexit. The same result has been mirrored in the general election’s results. Boris Johnson’s Conservative Party, which has a majoritarian, anti-Europe and anti-immigration stance, swept England and Wales. But Scotland voted for a local party that has immediately demanded a plebiscite to leave the UK.

Northern Ireland for the first time in its history has given more seats to the party that is secessionist, the Sinn Fein, than the loyalists. Sinn Fein wants Northern Ireland to have closer relations with, and if possible, unite with the Republic of Ireland, which is of course part of the European Union. The idea of Brexit is opposed to such a possibility.

Scotland has long felt that while it has an economic bond with England, it has been historically occupied by the English. The Catholics and several Protestants in Northern Ireland similarly feel a closer pull towards the Republic of Ireland with a common culture and language and of course closer trade ties than they do with the rest of the United Kingdom. Neither of these things is new and all this was known going into both the referendum and the general election. There were warnings that a radical change of policy with regard to Europe would bring other problems to the surface. But the majoritarian instinct of the English and the anti-immigration rhetoric of their politics were too strong and overwhelmed the rest of the election’s issues. For the moment, the English will feel the satisfaction of victory. Now let us try and look at our own predicament. India is in the middle of implementing an anti-immigration policy whose subtleties are not properly debated and therefore not fully understood by the majority of Indians and I would argue the majority of parliamentarians.

The issue is being cast in different ways by different actors. The ruling party says it is to give shelter to non-Muslims from Afghanistan, Bangladesh and Pakistan, but only those who came over before 2015. The Muslims who cannot prove their citizenship on the other hand will be jailed in detention centres. They cannot be sent to Afghanistan, Bangladesh or Pakistan if they do not have documents proving their citizenship of those countries. They will have to be permanently locked up in India, as is happening in Assam.

The way that the BJP government has projected the Citizenship Amendment Bill is as a measure to protect certain foreign communities because of external persecution. But the Indian states in which this issue is the most relevant, the states of the Northeast, have a problem not just with immigrants of any particular religion but all immigration, including that by Hindus. This is why they have been protesting the passage of the CAB. This is not fully understood by the rest of the country, which thinks this is a communal problem. It is not at root, but is being made out to be by the government.

The National Register of Citizens, which finished its work a few weeks ago because of a push by the Assam BJP, is now being rejected by the same Assam BJP. They say that the 19 lakh people who have been excluded from the list must be given another chance to prove their citizenship. Why? Because the majority of those who have been excluded, to the surprise of the BJP, are actually Hindus who do not have the documentation that is being demanded.

The Citizenship Amendment Bill offers these people cover and will only specifically exclude Muslims. If a non-Muslim cannot provide the documents under the NRC, they will be given asylum under the CAB. The Muslims, including children and old people, will be jailed. But the Northeast does not want this solution that the BJP has given and it has become clear that it has not been fully thought through.

It is difficult to see this as anything other than a self-inflicted problem. It is true that the roots of the NRC are in an agreement arrived at by Rajiv Gandhi with the Assamese government many decades ago. But the current crisis is the product purely of the BJP’s majoritarian and anti-Muslim focus. Like in the UK, this focus will produce side effects that are not anticipated and might not be wanted.