China’s coronavirus epidemic: For India, a challenge and wake-up call 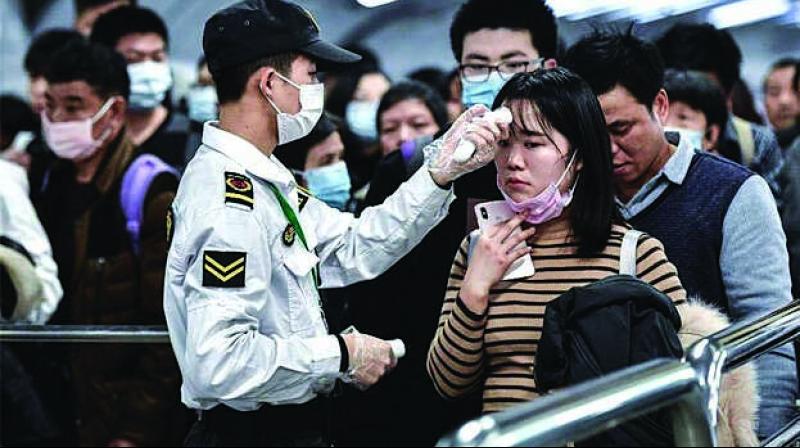 Unless it is controlled fast, the coronavirus outbreak will not only lead to a prolonged slowdown in China, but also hit global growth, and disrupt mega- projects across continents.

The deadly, undetected and symptomless epidemic coronavirus appears almost synonymous with China these days. The Chinese economy’s rise and the dependence of at least 60 Third World countries on Chinese finance, and more than 50 developed countries coveting Chinese factory products — from small tools to computer software, heavy engineering apparatus to telecommunications gear — appear to be in peril. With lightning speed, the world has started (physically) distancing from China, fearing a contagious and fatal epidemic.

At a time of China’s national distress, foreigners should also sympathise with the People’s Republic and think of solutions, but from a distance. The world media is exhaustively reporting the crisis situation in China, but the reporting in the Indian media is fairly low-key. It’s important for everyone in India to get an accurate picture of what is happening in that country.

In a first-hand account, reported by China Daily’s Global Weekly (February 7-13, 2020): “Unlike any other, 2019-nCoV (new coronavirus) is more treacherous, hiding under the camouflage of flu and SARS (severe acute respiratory syndrome) symptoms...”. The debilitating effects of the contours of the disease, as narrated by the Chinese, stand thus: “The pathogen is more noxiously evolved, embedded with murderous skills and savage velocity to spread faster and infect more furtively even during its incubation period... This devil is also more evil... attacking the very basis of the global community: air travel and connectivity. It is unlucky that China has to withstand another wave of intensive pathogenic assault in less than two decades. The country is forced to pay heavy sacrifices. Apart from losing hundreds of lives, thousands more are hospitalised”.

This scenario, as reported by the Chinese media, speaks for itself. The reality that China faces today: If not controlled immediately, things are bound to get worse. The Chinese economy seems headed for a downhill slide — which China fears most. A report says: “It’s understandable for each nation to apply self-protection in line with the World Health Organisation recommendations. But proposals of ‘shutting the border’ to maximise one member state’s interests may not necessarily immunise itself but will certainly affect public health as a whole.”

This signals both a sense of fear of the Chinese, and a (veiled) warning by Beijing to all nations which are planning and trying to reduce, if not stop, though perhaps temporarily, the chance of virus contamination through cross-border physical contacts. The Chinese obviously have the Russians — their closest business and diplomatic partner — in mind. On January 30, the Russian Prime Minister announced that 16 Moscow-Beijing border crossings will be closed “to protect our people”. Russia also halted the issue of e-visas to Chinese nationals and suspended the “special permit” allowing Chinese nationals short-term access to selected tourist destinations of the great Russian land mass. Thus the world’s fifth-largest land border stands between the contagious Chinese coronavirus and Moscow’s desire for “self-defence”. In one stroke, the chemistry and economics of the Russia-China combine is in the line of virus fire.

Unless it is controlled fast, the coronavirus outbreak will not only lead to a prolonged slowdown in China, but also hit global growth, and disrupt various mega-projects across continents. For the moment, international tourism is the first casualty. Aviation, transport, hotels, restaurants, retail stores and consumer markets already are staring at an emptiness in the high-profile destinations of the West.

How does India stand in this situation? How does India try protect its populace from the coronavirus, which already appears to have entered this country. We have to ensure, above all, the good health of our vast population, to take every possible step to keep the nation disease-free, and not allow Indians to be guinea pigs in an experimental laboratory.

As admitted by the Chinese themselves, the Wuhan-origin coronavirus of 2019 is far more dangerous and deadlier than the 2002-2003 Yunnan-origin SARS. It’s contagion characteristics, spreading through the air and physical proximity make all public gatherings highly avoidable. Our soldiers manning the Sino-Indian frontier need to be particularly alert in this regard, for if a single undetected coronavirus-afflicted Chinese border guard comes into contact with an Indian guard, the fallout could be severe. Similar is the situation at all international airports, where Indian personnel are pretty poorly equipped to deal with this deadly global virus of Chinese origin.

India must take the latest WHO warning seriously: “The global virus spread is the tip of the iceberg.” Around the globe, nations are waking up to the “Chinese threat”, and India needs to resort to an immediate and urgent course correction. Whatever the pulls and pressures, the Indian government would do well to take its cue from the Russians, arguably the closest of all foreign countries to the Chinese. Close the borders. Reduce flights. Control Chinese goods as far as possible. Stop issuing visas to the Chinese. Help Indians first.

China is four times more powerful economically than India. Yet China is struggling today due to its monumental miscalculations. It has already damaged a lot of its fertile land and air, and various experimental centres. But China being a highly secretive state, several gullible people and impressionable tourists are getting hoodwinked by the glamour and glitz of the Communist superpower.

If China’s Wuhan-origin coronavirus becomes an epidemic in New Delhi or its hinterland, how will the Indian authorities tackle it? How much resources will India need? What will happen to the economy, which is yet to show any signs of buoyancy? The sluggish consumer market? The rising debt-ridden and stressed banking system? The distressed agrarian sector? The visibly rickety health system in semi-urban and rural belts?

For the Indian State, the gravity of China’s coronavirus epidemic has increased enormously. It’s a challenge as well as an opportunity. We should help China in all possible ways, certainly, but not at the cost of the health of 1.3 billion Indians. “Health is wealth. Health is happiness”. The so-called economic and financial globalisation now endangers the real health of the planet too.