Tamil Nadu has a rich tradition of social work 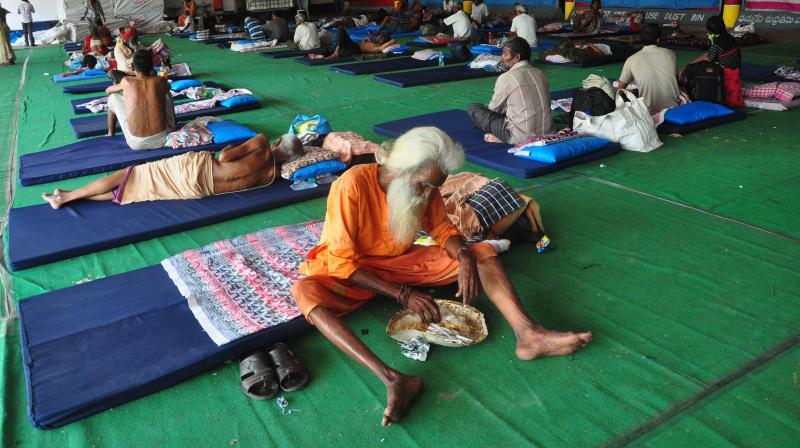 Only a despotic government can tell its people not to help someone in need. (DC Photo: P Narasimha Murthy)

Ravi, the man who irons clothes in our street, makes an SOS call from his village on the outskirts of Chennai, 12 days into the lockdown. He is penniless and has been buying essentials on credit. Now the grocer says enough is enough. We transfer a small amount to the grocer’s bank account and provide him temporary relief. But not everyone is as lucky as Ravi. People who were eking out a decent living as daily wage earners are suddenly in penury with no work, no income and no one to turn to for a loan or a meal.

The plight of homeless and mentally challenged people who live on the street is worse. Accompanying a group of social workers going in search of such people on the highways to offer them free lunch packets, for a story of course, was more of an eyeopener, personally. It seemed that those cooped up in shelter homes run by the authorities were a luckier lot as they at least get three meals a day, unlike the silent sufferers going without food and totally dependent on the large-hearted individuals, groups and organisations who reached out to them with a meal packet or some pack of essential commodities.

Now it’s this sort of charity that the Tamil Nadu government wants to banish. Individuals or groups cannot help another individual or a group going without food. Every bit of charity has to flow through the government machinery. Of course, the government has been doing its bit ever since the lockdown began -- providing shelter to stranded migrant workers, feeding the poor and providing relief to ration card holders.

But there are others who fall outside the purview of government agencies. There also people who have no ration card, no home and not in the government’s reckoning at all.  Those are the people only NGOs and small-time social activists could identify and reach out to. That is why there can be no justification in criminalising the large-hearted people who try to provide succor to their suffering fellow citizens.

In fact, Tamil Nadu has a rich tradition of social work, with many individuals and non-governmental organisations doing yeomen service in the fields of education, health, poverty eradication, social justice, human rights and so on, complementing the good work of successive governments. To give a specific example, Tamil Nadu could succeed in its battle against the spread of HIV only with the help of NGOs.

Also, ordinary people’s inherent kind-heartedness and their eagerness to help fellow human beings were on display during the 2015 Chennai floods. It was the common man who rose to the occasion, saving many individuals from drowning and helping the affected people. It was not the government that came to the people’s aid then.

When the reality is such, why has the present government suddenly undermined the work of private individuals and insisting on their working only through the government agencies? Knowing the inalienable red tape and lethargy associated with the functioning of government agencies, not many small NGOs, targeting say providing lunch to 200 people, can wait for clearances from the authorities.

Unlike national-level cash-rich organisations, with whom the Tamil Nadu government has now associated itself in providing succor to those affected by the lockdown, homespun groups of social activists will not be encouraged by the authorities to reach their teeny-weeny bits of relief material to those desperately needing help.

So there can be nothing wrong -- as long as social distancing is adhered to -- for small groups of do-gooders to search and find their targeted beneficiaries for providing relief even as the gargantuan organisations can function efficiently in league with the government agencies to reach out to much larger numbers of people.

Also, the government can rest assured that the work of small groups, who would like to see for themselves the results of their charity by reaching out to the needy personally, would not prevent individuals and organisations reposing faith in the government and contributing to the chief minister’s relief fund.

Cracking the whip on anyone violating social distancing norms is one thing and a sweeping ban on private charity is another thing. Only a despotic government can tell its people not to help someone in need, for such a move goes against the grain of democracy and even basic humanity.