Imagining a safe India, after coronavirus

How should India reimagine and remake a post-coronavirus future? 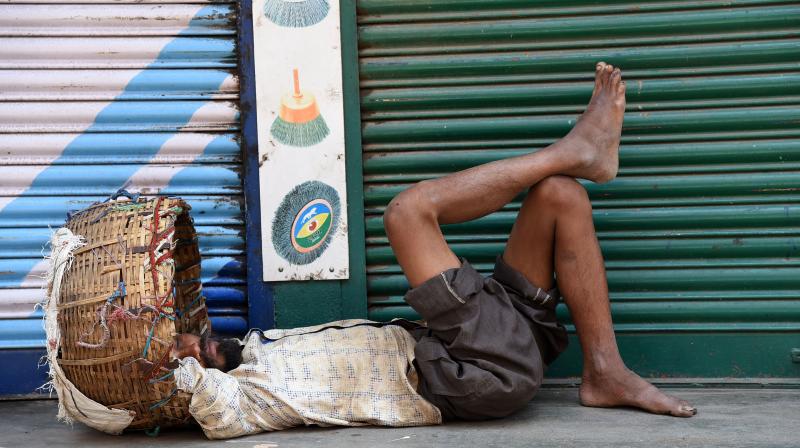 What's it going to be like when we're back on our feet. (DC Photo; Satish Basavaraj)

Framing a problem is key to its resolution. Framing a problem like the coronavirus pandemic is complex and, therefore, lends itself to no easy resolution. By resolution is not meant the therapeutic resolution of Covid-19, which, hopefully, will happen in course of time — as it occurred with the Spanish flu and other viral infections prior. Resolution in the true sense means preventing a pandemic like coronavirus from recurring without undermining the three meritocratic and critical underlying conditions that paradoxically aided its spread, namely globalisation, trade and commercial interconnectivity worldwide.

The framing of the coronavirus problem would, in consequence, have to encompass several domains — qualitative aspects of future political leaderships that aid pandemic containment with the limited choices available, a politico-economic balance required to minimise the malignancy of future pandemics while preserving the existing economic order and its strengths optimally, investments and intellectual devotion to epidemiological sciences and healthcare, and the global dispersion of efforts to check a repetition of the calamity. Facing an existential crisis of such dimensions for the first time since World War II, the United States and Western Europe will presumably draw lessons. In their own particular ways, Russia and China, as modern states and major powers, will not be far behind.

How should India reimagine and remake a post-coronavirus future?

Much like the rest of the world, India cannot reverse globalisation and all its concomitant features. Nothing lasts forever and China may also fall victim to historical cycles and cede its global manufacturing base to another nation or a group of closely aligned nations in a region. But this denouement is scarcely expected to occur in the immediate future. Instead of expending national energies on insulating itself with made-over autarky in favour of which suggestions have tentatively emerged from the ruling establishment, India would be better placed aligned with the globalised world.

The most important first step in reimagining and remaking a post-coronavirus future is the cultivation of a scientific temper which was sorely absent at first in the current pandemic and continues to reveal itself periodically and exasperatingly in the form of ingrained superstition and irrational beliefs. It was extraordinary, for example, that the rather inelegantly and menacingly monikered “Janata Curfew” was sold by the establishment as a 14-hour silver bullet for coronavirus whose longevity, according to The New England Journal of Medicine, as far as may be ascertained, varies from three hours in the air and four on copper to a full 24 hours on cardboard and 72 on plastic and stainless steel, the stuff of most Indian utensils. The less said about the circulated coronavirus “tips for survival” on the social media, including consecrated excreta, the better. Tied to scientific temper is abandoning the mythicisation of medieval science to the detriment of genuine achievements.

The cultivation of scientific temper is difficult without a leadership steeped in the merits of science that was this country’s fortune to possess at the dawn of Independence. This is by no means a peculiar characteristic of the country. The decline of scientific temper from the previous US president who rapidly and resolutely deployed the country’s epidemiological resources to countering Ebola in West Africa to the White House incumbent oscillating between denying the early seriousness of coronavirus and calling it a “China virus” is too stark to be ignored. All the same, the country could do with more chief ministers like Pinarayi Vijayan who said “our experience in dealing with the deadly Nipah (virus) helped us draw up a protocol… we (imbibed) good experiences from across the globe (and made it) Kerala-specific.”

It is possible that a political leader who scorns or is at least indifferent to science can flourish in a nation with scientific temper and high R&D spends as is the case with the USA. The dissonance can be repaired without great exertion in the next change of leadership because the fundamentals are robust. India’s problems run deeper. Exacerbating the strains of missing scientific temper in the national leadership and compounding them are research and development spends which remain stagnant at 0.60 per cent of the GDP compared to 4.55 percent for Israel/South Korea, 3.21 per cent for Japan, 2.79 for the US and 2.15 per cent for China. India also does not find a place in the first 10 spots of the 2018 Scimago Journal and Country Rank for peer-reviewed papers related to immunology, microbiology, biochemistry, genetics or molecular biology. It is no more heartening that the country spends a mere 3.7 per cent of GDP on healthcare putting it in the bottom 25 of nations worldwide.

Thus imaginative collaborations may be a good starting point. One collaboration worth considering is with virus genome analysts like Trevor Bedford of Seattle’s Fred Hutchinson Cancer Research Centre who tracks disease outbreaks worldwide. Bedford was the earliest to raise the alarm about the undetected spread of coronavirus in Seattle, Washington. Collaborations could nicely mesh with the new gene-mapping Genome India Project that has a part devoted to anticipating diseases.

Trickier by far is arriving at the optimum balance of saving lives versus saving the economy. It may be argued that the idea of such a balance possesses greater traction in Western economies than in the Indian one where over three quarters of the workforce has neither a secure job nor a guaranteed minimum wage. This critical difference has produced the internal migrant nightmare during the Indian lockdown with nothing closely resembling this occurring internationally. While the pandemic will contract every major economy starting with the US and China and even induce recession in some, short-term recovery is less assured for India. Growth was in decline when the pandemic struck and the country has to bear the added costs and steep burdens of a dislocated and shattered unorganised workforce. Since the modelling of the balance, combining the models of disease epidemiology and disaster-mitigating economics, incorporating multiple variables and significant unknowns about pathogens, is still very much in infancy, being only as old as the community spread of Covid-19 to the West, India has time, but not a great deal of it.

In the middle of a full-blown pandemic, a total lockdown and surging mass casualties, when going from one day to the next poses countless challenges to authorities, future challenges from civilisation-threatening contagions may not enjoy the highest priority today. But it would be perilous to ignore the challenges and adopt a business-as-usual attitude once coronavirus is overcome. Life may or may not change after Covid-19. But the centrality of disease anticipation with science, robust healthcare without exception, and general economic well-being — these being mediated in their entirety by a leadership imbued with scientific temper — must become commonplace wisdom.