More bombs were dropped by the US on Indochina than on Germany and Korea combined. 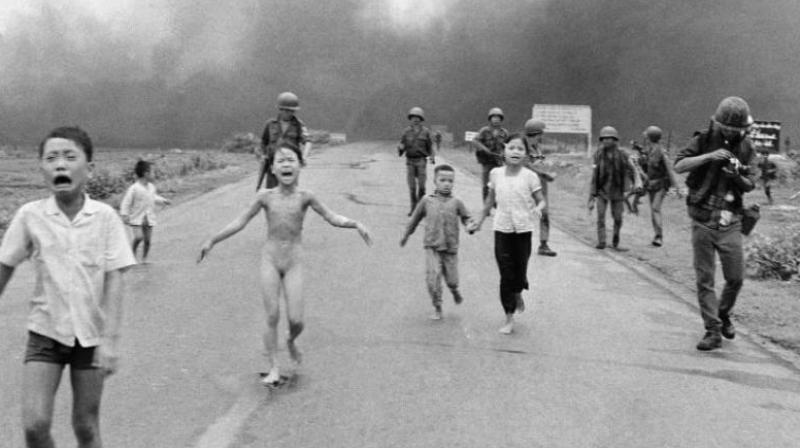 The picture was aken by Vietnamese photographer Nick Ut Cong Huynh for Associated Press, the picture was honoured with the Pulitzer Prize. (Photo: AP)

Readers of my generation will no doubt recall the horrors of the Vietnam War in which countless lives were lost in a pointless conflict.

I was in my early 20s when the Tet Offensive of 1968 shattered American illusions that the Vietcong were on the verge of defeat. I remember all too well the anger many of us felt over the merciless American bombing of unarmed civilians in North and South Vietnam, as well as Laos and Cambodia.

Watching the 10-part documentary about the war directed by Ken Loach and Lynn Novick, I relived those bleak times as harrowing images from old newsreels showed the unceasing American assault on Vietnam. In terms of archival research, this is a cinematographic tour de force. Spread over 18 hours of news reports and interviews, it overwhelms the viewer with its unrelenting coverage of events on the shifting battlefields, as well as in Washington, Hanoi and Saigon.

By weaving together factual coverage and a vast range of personal interviews, the documentary underlines the horrors and sacrifices on both sides. In particular, the implacable determination of the North Vietnamese Communist leadership, and its willingness to commit hundreds of thousands of men and women to the cause, comes through as an immovable force.

Facing them were the mounting numbers of Americans in uniform: at one point there were nearly half a million US troops in South Vietnam. Almost 60,000 were killed. More bombs were dropped by the US on Indochina than on Germany and Korea combined.

Seen on paper, these statistics do not move us as does the testimony of a 15-year-old North Vietnamese girl who volunteers to join a unit that hauls supplies to the south through the jungle. Known as the Ho Chi Minh trail, this network of paths was constantly bombed by US planes. Napalm was commonly used, and casualties were heavy.

Through the documentary (I have watched the first six episodes) runs one constant refrain: as casualties mount and success remains elusive, general after American general asks for more troops. The Pentagon keeps assuring President Lyndon Johnson that if field commanders were given extra troops, the enemy’s defeat would be assured.

Inside the US, the daily TV coverage of the war made it increasingly unpopular, fuelling a significant anti-war movement. When four demonstrating students at Kent State University were shot dead by the National Guard, protests erupted across the US. Large demonstrations broke out in London, Paris and other capitals.

Finally, following the 1973 Paris peace talks, the Americans withdrew from Vietnam, leaving behind the abiding image of a helicopter taking off from the US embassy in Saigon, with people clinging to its landing gear. Thus ended a needless war that consumed hundreds of thousands of lives.

Sadly, no lessons appear to have been learnt. The Americans are still bogged down in Afghanistan after 16 years of war. And the generals are still calling for more troops and promising victory.

With their focus on “body count” and Powerpoint presentations, US generals have not factored in ideology and nationalism as force multipliers. Given the fact that American politicians are ultimately answerable to voters, they cannot afford an unending number of body bags. One reason there is so little interest in America about the Afghan conflict is that the class composition of US forces has changed since the Vietnam War. In the latter period, soldiers were conscripted into the armed forces, forcing many young, educated middle-class men to fight.

Now, the Americans have an all-volunteer military, and most foot soldiers are from the working class. They have a lower social profile, and get little sympathy or attention. There is thus far less media coverage of the Afghan war than Vietnam received.

But the larger question to be asked is why Americans have not applied the lessons of Vietnam to Afghanistan? After all, in both conflicts they faced poorly armed but highly motivated foes, and both the Vietcong and the Taliban had contiguous territory they could shelter in.

A retired Russian general, interviewed during the height of the fighting in Afghanistan, said he was amazed to see the Americans repeating the Red Army’s mistakes. Why, he wondered, had they not spoken to him and his ex-colleagues to benefit from their experience?

Why indeed? Obviously, hubris prevents US generals from learning from history, or the knowledge of others. They think their superior arms can win easy victories, but as the Vietcong and Taliban have shown, asymmetrical warfare depends more on resolve and a willingness to sacrifice.