South Korea is not the only theatre where Uncle Sam has egg on his face. In Syria and Afghanistan too, the US has not covered itself with glory. 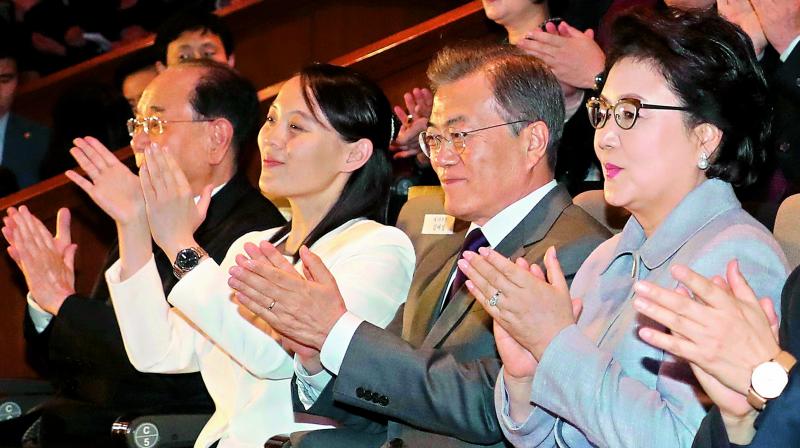 America’s vice-president Mike Pence watched the opening ceremony of the Pyeongchang Winter Olympics as chief guest with a barely disguised grimace. It was supposed to a smile but it was not. He evoked sympathy because he looked like a decent man who, under the compulsions of his job, was being made to eat crow in full public view. In the same frame as Mr Pence was Kim Yo-Jong, North Korean dictator Kim Jong-un’s sister, whose popularity at the Games was in inverse proportion to Mr Pence’s.

It was ironical, this expression on the face of a leader from the United States. After all, the US has 37,000 troops in a country which has been a reliable ally, even a client, since the Korean war.

This is not the first instance of US embarrassment in the Koreas ever since Donald Trump entered the White House. Even as he broke bread with China’s Xi Jinping at his Palm Beach club in Florida last year, Mr Trump flexed his muscles at North Korea’s Kim Jong-un. “We are sending an armada,” he boasted. It seemed credible because just moments ago he had ordered a missile strike on Syria. There were reports of the aircraft-carrier Carl Vinson and three other warships headed towards South Korean waters. Heaven knows which audience Mr Trump was playing to, but South Koreans were petrified that an unpredictable US President was provoking North Korea into a dangerous war which would destroy the South. It turned out that the “armada” had sailed all right, but towards Australia. In the shadow of these shenanigans, Moon Jae-in was elected South Korean’s President despite the United States.

After scaring Seoul out of its wits, Mr Trump helpfully announced the installation of the advanced THAAD anti-missile system along the demilitarised zone (DMZ). Just when Seoul might have begun to appreciate his generosity, Mr Trump impatiently demonstrated his low salesmanship. He produced a bill of a billion dollars. Difficult to imagine what four-letter word South Koreans must have used to refuse.

South Korea is not the only theatre where Uncle Sam has egg on his face. In Syria and Afghanistan too, the US has not covered itself with glory.

A superpower is pinned and wriggling against the wall in so many theatres that it is not surprising think tanks across the world are considering the question — what might the United States do next?

The assumption in Moscow is that the West will use all the propaganda tools at its command to rub Vladimir Putin’s nose in the mud during the Fifa World Cup that Russia will host in June-July 2018. During the Sochi Winter Olympics in 2014, the US helped Moscow with intelligence on terrorist groups lurking in the Caucasus. This time the situation is different.

As Mr Putin prepares to cope with World Cup-related security challenges, one image will certainly cross his mind — the furtive visit of Prince Bandar bin Sultan to the Kremlin on the eve of the February 2014 Sochi Winter Olympics.

Why did the Western media ignore the incredible Bandar story? Because ever since the Russians had their boots on the ground in Syria from 2015, they had a ringside seat on the barely disguised drama of Americans giving arms to various groups fighting the Assad regime. None of these stories would have been flattering to the US, including the one about Bandar, George W. Bush’s favourite sidekick.

The rules of the game, according to Russian and Turkish sources, were simple — the groups battling Mr Assad under American guidance would be described as “freedom fighters”; those not serving American (Saudi, Israeli) interests, were ISIS, Jabhat al Nusra, Al Qaeda. They, each one of them, could change their labels, depending on the dynamics on the ground. The Russians had video evidence on all of this. The Turks too are in the know, first as participants in the battle against the Assad government and later fighting YPG, the Kurdish group that adopted a Syrian name — Syrian Democratic Forces.

The Turks consider the Abdullah Ocalan-led PKK as their existential enemy. The PKK is a “terrorist organisation” by the UN’s definition. By Turkish definition the YPG is the PKK with another name. This “other name”, Syrian Democratic Forces, is a sleight of hand without which the US cannot help YPG/SDF. Their original name has the “terror group” label attached to it.

The Turks have told the US that their operation against the YPG in Afrin will continue so long as even “one terrorist” remains in the territory contiguous with Turkey. The situation has brought Turkey, Russia and Iran on the same side. Much to the chagrin of the US, the Syrian Democratic Forces too are reaching out to Damascus in their desperation. Newspapers supporting Turkish President Recep Tayyip Erdogan are, in deference to the situation, recommending an Ankara-Damascus rapprochement, if not specifically an Erdogan-Assad handshake. An isolated US, egged on by Riyadh and Tel Aviv, therefore faces Russia and its cohorts in Syria. The situation is fraught.

Even in the Afghan theatre, the US is not smelling of roses. Russia’s deputy foreign minister Morgulov Igor Vladimirovich told the impressive gathering at the Raisina Dialogue in New Delhi recently something of abiding interest to the region — that ISIS fighters were being flown to northern Afghanistan. Iran’s supreme leader, Ayatollah Ali Khamenei, told the Friday congregation January 30: “The US goal of transferring ISIS terrorists to Afghanistan is aimed at creating a justification for its continued deployment in the region.”

Turkish intelligence has an interesting take on ISIS being transferred to Afghanistan — these are “upgraded” Taliban after a stint of “jihad” in Syria. The wide disparity in the wages of the regular Afghan Taliban and those trained in Syria has provoked the home-grown Taliban to teach Americans and their “lackeys” a lesson — hence the spike in violence. Also note, therefore, the American isolation in Kabul. Aggressive retaliatory posturing by Washington will bring Moscow and Beijing into an even tighter embrace. The times are certainly interesting, as the ancient Chinese proverb would put it.