The making of a teacher, storyteller, and India’s first ‘Nobel’ architect

Sudipto Ghosh
The writer is a practising architect and a visiting faculty member at the School of Planning and Architecture, New Delhi.

He seemed to gravitate towards one particular student from Porbandar almost immediately. 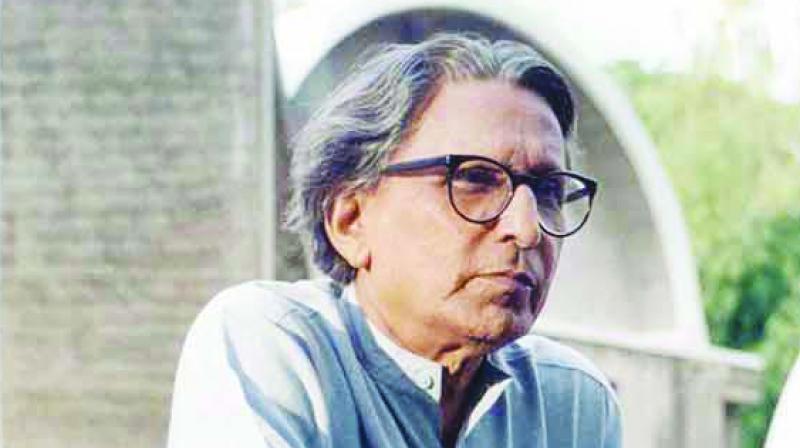 The past week has seen a profusion of newspaper and journal articles on Prof. Balkrishna V. Doshi, who recently became the first Indian to be awarded the Pritzker Prize, widely recognised as the Nobel Prize of architecture. Several of these articles have been written by persons who have known him intimately and yet have chosen to present him objectively to the reader as an architect who is credited for shaping the vocabulary of modern Indian architecture. This piece tries to offer a more personal sketch of the man and represents those who have been his students, as well as the many “ekalavyas” who have considered him a teacher and mentor for years without ever having interacted with him directly.

In the spring of 1991, I learnt that I had been admitted to the School of Architecture at the Centre for Environmental Planning and Technology (CEPT), Ahmedabad. It was not the kind of news that one received while sifting through the mail, but the kind that one awaited with bated breath while crowding in front of a rather short list pinned upon a tack board. I had travelled from Delhi for the entrance exam and had fallen in love with the place the moment I walked down the brick path leading into the institute without a gate or even a formal entrance. This was all before I knew the man who had designed the buildings at CEPT and was one of the founding members of the institute, who gave direction to a new model for education, emphasising learning rather than teaching.

As new students, we had our first interaction with him three or four weeks into the programme when he was invited to review the works of the first-year students. We had all worked through the night and were still putting final touches to our models when Prof. Doshi, in his simple short kurta, trousers and sandals, walked into the studio. He seemed to gravitate towards one particular student from Porbandar almost immediately. This shy fellow had slept through most of the night huddled under his desk, and gingerly presented a hurriedly put-together model of what appeared to be a giant flower that emerged from the centre of the design to sway precariously over the other blocks. We watched with utter disbelief as Prof. Doshi, visibly pleased with the absurdity, asked this boy how he had come up with the idea and received the answer: “I dreamt it last night”. That seemed to clinch it for Prof. Doshi, who now thoroughly convinced of the design’s pure and original spring, praised it as a work that came from within and was without artifice. As we quickly came to terms that our more “sophisticated” and “articulated” designs had not even earned a second glance, the realisation of what had been said in those few words about “what comes from within” would take us a considerably longer time to fathom.

Later, on several other occasions, we would find Prof. Doshi, or Kaka as he is fondly known on campus, speaking to a group of students and we would huddle around to listen to him. His words mesmerised us. He would talk simply, in a manner that was entirely clear even to the youngest lot of students. More so, while responding to the questions of some of the very influential senior students who had picked up a smattering of jargon from the books in the library. He used simple parables and metaphors that immediately laid the most contentious and hotly debated issues to rest. I remember one such question on the topic of “timelessness in architecture”. Some students argued that architecture needed to be timeless, free of the vagaries of fashion and style, while others would say that it was important to innovate constantly and identify with the spirit of the times. Prof. Doshi’s response was as clear as it was beautiful. “Sometimes, you have to be the rock that remains unchanged for a thousand years. At other times you have to learn to admire the butterfly that lives for a few hours but is full of colour and life.” I will venture to estimate that it has been over 25 years since I heard this. I am equally confident I will remember this when I am 90, if I am fortunate to live as long and as well as B.V. Doshi. While the rest of us seem to be picking up years at wholesale rates, Prof. Doshi appears to have aged about three years in the last 20. At over 90, he walks energetically with an upright gait, speaks animatedly, and has an inquisitive 20-year-old’s sparkle in his eyes.

The late Subir Roychoudhury, a structural engineer who had worked with him, happened to find himself without a hotel room on the occasion of a site visit. Prof. Doshi graciously invited him to share his room, much to the surprise of the engineer. He narrated waking up in the morning to Doshi’s breathing exercises and yoga and felt he had discovered the secret to both his health as well as his intellect. But perhaps the truer sign of a yogi is that you never see him angry, agitated, or in a hurry.

Architects who are plugged deeper into the grapevine reported an incident of Prof. Doshi entering a prospective client’s meeting room as one of the two shortlisted architects with only a couple of sketches. This happened right after the other, equally eminent, architect had made a very comprehensive presentation to the clients. Prof. Doshi’s presentation was apparently only a captivating story that completely altered the way the clients thought about the project. It was not about architecture at all but about the transformation that architecture can make — simply, without subterfuge, and in no more complex way than with a simple story.

Prof. Doshi’s talks — that may be found online as well as in the archives of most well-known universities across the world — are full of such stories. They are of his days in Paris living only on olives and bread, of the learnings from a tree, of how this came to be or that, of his conversations with Le Corbusier, etc. All of these stories remain episodic, like unexploded mines that are yet to be trodden upon. Until they are and then they affect someone or some action, take root and transform the way we think. They touch us irrespective of our backgrounds or our education since they are not about architecture at all, but in veneration of something far more profound — the experience of life.

I am not sure whether the Pritzker jury realises what a huge impetus this award gives to indigenous design practices in India and other South Asian countries who have been living under the shadow of the West; perhaps even the way that the government perceives and values the work of such practices. Most important, however, I think this has been enormously important for the thousands of students who come from simple backgrounds but with rich traditions, and are thrown immediately into a world of glamour and image at “professional” architecture schools. Prof. Doshi will continue to remain their mentor and teacher, irrespective of the institute they attend, in this abstract and complex world.