Farooq’s Abdullah's silence is a statement 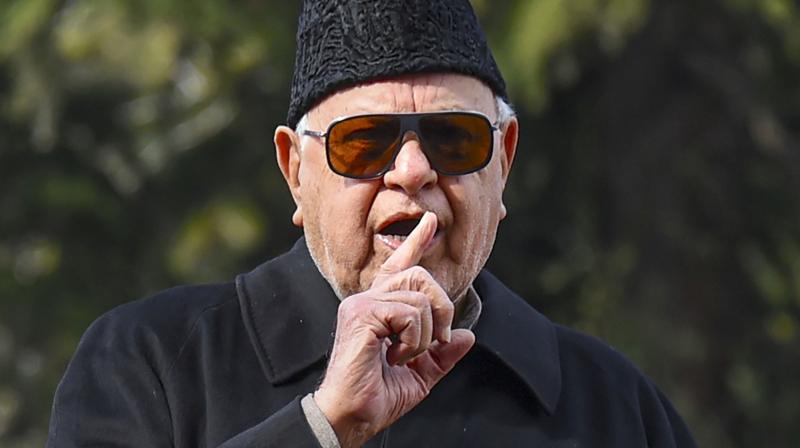 National Conference patron Farooq Abdullah with his wife Mollie Abdullah (left) and daughter Safiya Abdullah (right) speaks to the media after his release from detention on March 13, 2020. (PTI)

Farooq Abdullah, former chief minister of Jammu & Kashmir, is now a 'free man' after his 222-day long detention, but he is unusually silent on the political question of Kashmir. Abdullah’s admirers lovingly refer to him as Tiger, but his roar was missing after he was set free.

The National Conference patron weighed his words carefully. “Thankful for public support and parliamentarians who fought for my freedom. My freedom is incomplete unless everyone else is released too,” he told reporters at his residence in Gupkar, Srinagar.

He said he would like to go to Parliament if allowed. And that the future course of action would be decided once all incarcerated leaders are released.

What actually has cast a shadow on Abdullah’s release and subsequent silence on the removal of Kashmir’s semi-autonomous status and statehood is the reported visit paid to his residence by India’s former spymaster Amarjit Singh Dulat in February.

According to The Wire, Dulat’s Srinagar visit had received a green signal from India’s current national security adviser, Ajit Doval.

Dulat is often referred to as “Farooq Abdullah’s man” and he doesn’t mind that one bit. In his memoir Kashmir: The Vajpayee Years, Dulat showered accolades on Farooq Abdullah.

In his second book titled Spy Chronicles, which was co-authored with the former intelligence chief of Pakistan, Asad Durrani, and written by Indian journalist and editor Aditya Sinha, Dulat goes on to say that “…He (Farooq Abdullah) is one Kashmiri who understands not only Kashmir but New Delhi as well. He is the best bridge between New Delhi and Srinagar. Now he’s reached a stage where he needs to understand Pakistan, and if he did, and he already knows New Delhi, then it would help.” (Spy Chronicles: RAW, ISI And The Illusion Of Peace, chapter: The Unloved Dr Farooq Abdullah, p.112).

The book is based on conversations between Dulat and Durrani in Bangkok, Kathmandu and Dubai.

What could the present dispensation in New Delhi want from Abdullah at this stage? Does the Hindu nationalist BJP want to show to the world community which has been critical of New Delhi’s moves in Kashmir that a genuine political process is happening on the ground?

In Kashmir: The Vajpayee Years, Dulat says, “Money in Kashmir goes way back, even to Sheikh Abdullah’s time. After all, why was Sheikh Abdullah dismissed as Prime Minister of J&K in 1953… Thus, since Sheikh saheb’s time, anybody who’s been on the right side of New Delhi has been getting money from New Delhi. It’s as simple as that.”

Against this backdrop, people in Kashmir have grown sceptical about Abdullah’s next move, for the general impression amongst the people remains that he is a man who has always been on New Delhi’s side, by compulsion if not by conviction.

Yet it is too early to dismiss him as “compromised” or “contained”.

The restive region’s oldest political party, the National Conference, which actually came into being in 1931 and was rechristened in 1939, issued a rather soft statement on Abdullah’s release, saying that it was “a right step toward restoration of a genuine political process in Kashmir”.

The tone of the statement was apologetic.

The question that begs an answer is what actually led to Abdullah’s release? Is it due to “improvement” in Kashmir’s ground situation or was there international pressure that worked?

According to Aakar Patel, a Bengaluru-based writer who previously worked with the London-based rights and advocacy group Amnesty International, “This (Abdullah’s release) is due to pressure from the US Congress House Resolution 745.”

Patel is of the view that “there’s never been as much pressure on the Indian government as there is today on CAA/NRC and rights in India generally, including Kashmir…We have nobody supporting us on these violations. That is why Narendra Modi is folding on one thing after another.”

The United Nations Human Rights Council, the US Congress, US presidential candidate Bernie Sanders, European Union parliamentarians and leading human rights groups such as Human Rights Watch (HRW) and Amnesty International (AI) have been very vocal about detentions and Internet curbs and free speech in Kashmir.

That said, a section of people are sceptical and believe that Abdullah may have become quietly resigned to Kashmir’s new ground realities after the revocation of Article 370 and the dismembering of Jammu & Kashmir from a full-fledged state to two separate Union territories, namely, Ladakh and J&K.

Has Abdullah, therefore, made a compromise with the BJP? There's no concrete evidence of this as yet. The trend in Kashmir after August last year has been that several political leaders, mostly second-rung, have been released by turns. They include leaders of National Conference, People’s Democratic Party, People’s Conference, Congress, etc. It is common knowledge in Kashmir that many among them were released only after they allegedly signed undertakings that they won’t speak against the removal of Article 370.

Weeks after their release from detention, some of them resigned from their political parties and joined hands with the newly-created Apni Party led by PDP deserter Altaf Bukhari. The business tycoon-turned-politician enjoys the BJP’s patronage and support. Most of those who joined him were earlier affiliated with PDP.

On its part, the BJP wants to ensure that new political slogans should remain restricted to restoration of the region’s statehood and domicile rights; not autonomy or independence.

One day, during his tenure in the Prime Minister’s Office (PMO) — where Dulat unexpectedly landed after his time heading the Research & Analysis Wing (R&AW) was up — Brajesh Mishra, the then principal secretary to the late Atal Behari Vajpayee, offered an unsolicited suggestion to him: “Dulat, the only thing straight in Kashmir are the poplars.”

In this new atmosphere, it would be interesting to know how things unfold in Kashmir in the coming days and weeks. The release of two other former chief ministers Omar Abdullah and Mehbooba Mufti and also young politician Shah Faesal, who heads the J&K People’s Movement, will determine what kind of politics will ultimately prevail in Kashmir.

Meanwhile, as the world is anxiously battling the coronavirus pandemic, the Kashmir Valley is witnessing some unusual political activity after a yawning gap of over seven months since the restive region’s semi-autonomous status and statehood were removed last August followed by an unprecedented information blockade, the world’s longest Internet shutdown, mass arrests and suspension of civil liberties.

“The parties created by agencies cannot run Jammu & Kashmir or democracy in J&K,” the Congress leader said at the residence of Abdullah. He demanded restoration of statehood to J&K.

Strangely, Abdullah remained silent and did not make any political statement. The silence was itself a statement.

As an aside, Abdullah on Saturday met his incarcerated son, Omar Abdullah, for the first time since last August. The pictures told a story. Omar Abdullah has grown a long salt-and-pepper beard. Again, no controversial political statement was made on the occasion.

A general sense is that once all leaders, including Omar Abdullah and Mehbooba Mufti, are released, there would be more clarity with regard to the path ahead. The perception on the ground suggests that both Omar Abdullah and Mufti and also the bureaucrat-turned politician Shah Faesal have become politically radicalised during detention while their detractors say that all Unionist politicians have actually played to the BJP’s script and are trying to “sell their detention as a sacrifice”.

Though it is amply clear that NC is playing a waiting game and Abdullah after his release is looking more and more like a reluctant initiator, giving rise to speculation that the Unionist parties at this point in time are not in a position or not willing to challenge the BJP’s script in Kashmir.

Will things change once Omar, Mehbooba and Faesal are out?

“It appears that Kashmir is the only place in the world where politicians across the ideological spectrum have, for now, decided not to talk politics.
If not you guys, who will?
Retire, if tired.
Resign, if scared.
Silence is the new political party in Kashmir!"