London Diary: We can't have a herd immunity approach to coronavirus in Britain

For herd immunity to work, experts say around 60 per cent of the population, some 40 million people, need to catch the virus 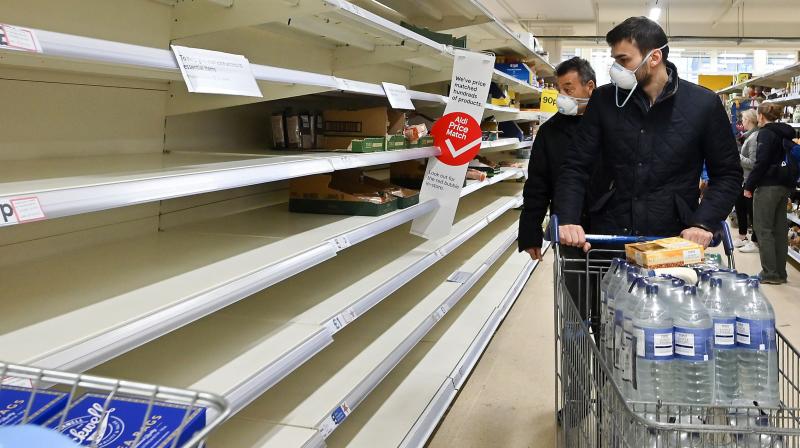 Shoppers wearing masks are faced with partially empty shelves at a supermarket in London on March 14, 2020, as consumers worry about product shortages, leading to the stockpiling of household products due to the outbreak of the novel coronavirus COVID-19. Faced with supermarkets being emptied and online shopping overrun due to the COVID-19 pandemic, UK retailers are appealing to consumers to come to their senses and ensure that the country will not run out of food. (AFP)

Social distancing is creating a whole new etiquette as Covid-19 cases increase in Britain. Prince Charles is not shaking hands any more. The Queen has begun to wear gloves when she has to pin a medal or an honour on someone at the palace. People are being encouraged not to shake hands or kiss or hug. It's Namaste London instead.

Even Boris falls in line

The Prime Minister, Boris Johnson, had dragged his feet about declaring an emergency for a variety of reasons. This included the “herd immunity” theory, where it is believed that by not rushing any immediate action, people, hopefully, will develop immunity to the virus. But for that kind of tolerance to be built up, experts say around 60 per cent of the population, some 40 million people, need to catch the virus. Realistically, we cannot afford that, and time is running out.

Italy has shut itself down and Spain is following suit while France has shut the Eiffel Tower. Across Europe, there is a crisis. Boris was hoping to delay the emergency till the weather improves. Then hospital beds would be free as winter woes will have gone away and many elderly would be back home.

Finally, by Saturday, even Boris caved in and began to take matters seriously. Meetings of 100 people or above have been banned. Sports events have been cancelled. Festivals like Glastonbury are on the endangered list.

Schools will not shut yet. But universities are switching to online lectures and examinations. Cambridge has cancelled the practical part of its medical degree examination as professional doctors may found it tough to evaluate students while they are needed to treat real-life patients.

No football, it's that serious

People are beginning to realise the seriousness as weekend sports fixtures are cancelled. Football matches are off in the Premier League and all lower divisions as well as European fixtures in England and Scotland. Even the pivotal Six Nations rugby match between Scotland and Wales has now been cancelled with 75,000 spectators disappointed. Football matches will resume in April. For the first time in living memory, the league may not complete all 38 fixtures among the 20 top sides. There is talk of Wimbledon and the London marathon not happening. The UK will have to reinvent its identity!

Farewell to Harry and Meghan

It has been a week of farewells, hellos and shutdowns. Prince Harry and Meghan came over for their last royal duty. Harry has always had an attachment to the armed forces and he enjoys his position as the honorary head of the Royal Marines. At a big gathering in Royal Albert Hall, Harry bid a sentimental farewell to the Marines. He was dressed in the red jacket of the Marines and Meghan wore a stunning red outfit as well. Then there was the Commonwealth Day ('Empire Day' as it used to be called) celebration at Westminster Abbey. The tabloids enjoy setting up a rivalry between Kate and Meghan whatever may be the real situation. Did Will and Kate snub Harry and Meghan? It is when you read such frivolous stuff that you can understand why Harry recalls how his mother was hounded. In any case they did not bring Archie and so great-grandmother and grandfather are pining for a sight of the latest arrival to the Firm. They will have to wait.

Then last Wednesday we had Rishi Sunak’s debut as chancellor of the exchequer (with less than a month’s tenure) presenting his first Budget. The House of Commons was packed and many MPs were left standing. Precisely at 12.35, after Prime Minister’s Questions, Rishi rose to present the Budget. He wowed them. As someone said, he was just what you needed. A confident head boy and a cool asset manager. He had money to give away — to fight the coronavirus, for the National Health Service, for extra help for businesses and workers affected by the virus, to fill five million holes in the roads, for climate change. No wonder he is popular with his party and with the tabloids. Dr Feelgood was how one newspaper described him. A star has arrived on the British political firmament.

There were going to be local elections in England in May. On Friday, we learned that they have been postponed for a year. So Sadiq Khan will have an extra year as London mayor before he faces election. So he will be in the record books whether he wins or not. Parliament has not yet been shut down but one week more is all that seems likely.

Even so, London continues to be lively. There is an Andy Warhol exhibition at the Tate. The National Portrait Gallery will unveil a portrait of tennis star Andy Murray. The stage version of Pretty Woman is due and the Royal Opera House is staging Fidelio, Beethoven’s opera about the French Revolution. We have to see if anyone cares to go to these spectacles or stays at home washing their hands for twenty seconds each time every hour.