Trump-ing the world, one nation at a time

Trump knows the great actor has a teeny-weeny constituency of like-minded Americans who are hugely embarrassed by the US President. 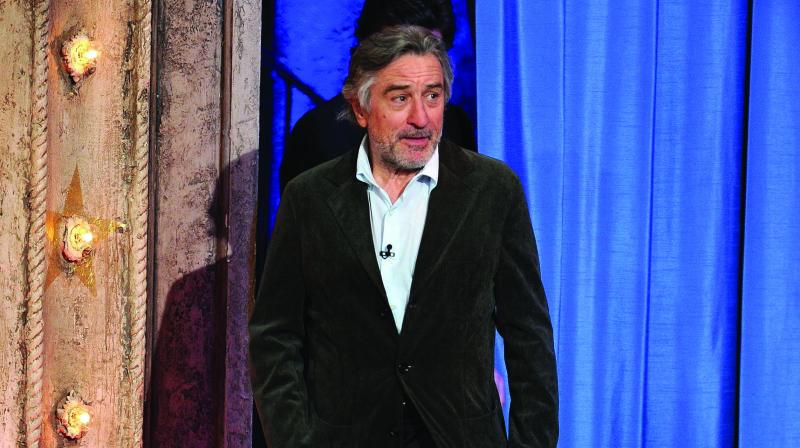 When legendary actor Robert de Niro received a standing ovation from his fraternity at a recently held awards function, it wasn’t for his latest screen performance. It was for something even more significant - De Niro had loudly and belligerently asked the US President Donald Trump to “f**k off”! A few hours later, Mr Trump made history in Singapore, pumping the hand of the one man on earth who can lay claim to being even crazier than Trump —- Kim Jong-un, the maniacal North Korean leader detested by the rest of the world. Whether or not something concrete and positive comes out of this epic encounter, one thing’s for sure —- Mr Trump knows exactly what he’s doing —- and that is winning his second term as President. He really doesn’t give a dayyyyuuum what a Robert de Niro thinks of him —- he has already declared him a man of “low intelligence”. Mr Trump knows the great actor has a teeny-weeny constituency of like-minded Americans who are hugely embarrassed by the US President.

The rest of the vast majority seems to be solidly behind the man with the orange hair who tweets so obsessively and in such a rush that he even misspells his wife’s name!

Critics are still talking about the famous G-7 photograph that shows Mr Trump pouting defiantly as Angela Merkel towers over him, her body language conveying just one message: “Grow up and behave yourself... or else!” That’s the funny part. Mr Trump resembles a rebellious schoolboy refusing to obey the school headmistress and her gang of docile teachers. Everybody laughed at Mr Trump’s churlish conduct at that time, hoping that he’d apologise or at least explain his rigid stand. What did the madman do instead? He aggressively attacked Justin Trudeau and called him a “weak and dishonest man”.

Some would say that the G-7 is toothless and irrelevant without America. Others are already expressing their “shock” at Mr Trump’s bad boy behaviour, the very behaviour that has won him so many brownie points back home.

Mr Trump is first and foremost a canny businessman not averse to taking big risks. By not playing by the rules, he has successfully established his USP of a daredevil who cares two hoots about propriety. This is the sort of hustler the average American looks up to and votes for —- the President who won’t take bullshit from anybody. Behind the bluster and gaffes is a shrewd man with his finger on the pulse of all those stereotypical American “hicks” who are openly mocked by more sophisticated world citizens. Mr De Niro’s abuse will fall on deaf ears and only impress those who find Mr Trump appallingly crass. This is a tiny, insignificant percentage, representing a demography that does not impact the polls at any level. Mr Trump knows as much. His ambitions go way beyond impressing the likes of Mr De Niro. Or even Angela Merkel, for that matter.

When I remember our brief encounter in Pune (2016), what I can call a real “takeaway” from that evening, was his sharp, focussed, aggressive response to every question thrown at him on stage. He didn’t duck and he didn’t blink. Compared to his bombast, poor Don Jr. looked like an absolute wimp —- a goody-goody Boy Scout in search of a stranded puppy to rescue. Mr Trump didn’t bother to hide his notorious glad eye, as he appreciatively surveyed the large ballroom, filled with beautiful Pune celebrities. He posed for selfies with the ladies, and did the job he was in Pune for — hard-selling Trump Towers to potential investors. It was obvious that this is one role he enjoys and which clearly does not tire him out. After the standard hand-pumping and air-kissing, he headed straight back to the airport, leaving the audience pretty gobsmacked. He is a larger-than-life creature, with a personality one can fairly compare to a bulldozer. Since he was travelling with his sons (as smart as they come), the family dynamics established one thing unambiguously —- he is the ultimate boss. Nobody messes with this guy. Least of all his well-mannered, well-behaved children. They act deferentially and discreetly in his presence, leaving him to hog the show. They are smart enough to figure that he IS the show!

And this show has been on the road for decades. Without him to helm it, the Trump empire, which has seen many ups and downs, will come crashing down. His successor is likely to be Ivanka, further pushed and prodded and propped by her ambitious husband, Mr Trump’s controversial son-in-law Jared Kushner.

As things stand, Mr Trump is steamrolling his way through the world, uncaring of popular perceptions. Not even a porn star’s lurid accusations could dent his ratings. He can brazen it out of any and every situation. But wait —- there may be just one chink in his armour. And that’s his beautiful wife Melania. If she decides she has had enough of this maniac and walks out (of the marriage), the chances are that Mr Trump will crumble publicly. So far, she has stopped at swatting his hand away on camera. Next time, she may throw in the towel and punch him in the nose. Now that is one photo-op the world is waiting for.

Maybe The Donald will respond by roaring “You’re fired!” if Melania divorces him while he is still in office. He will tweet and tweet and tweet about Melania’s past, her present and her future.

If such an eventuality does come to pass, it will define the Trump years far more graphically than any other epoch-making summit. A presidential divorce is far sexier than de-nuclearisation.