The nine manifestations, known as Navdurga, represent all the cosmic energy of the universe. 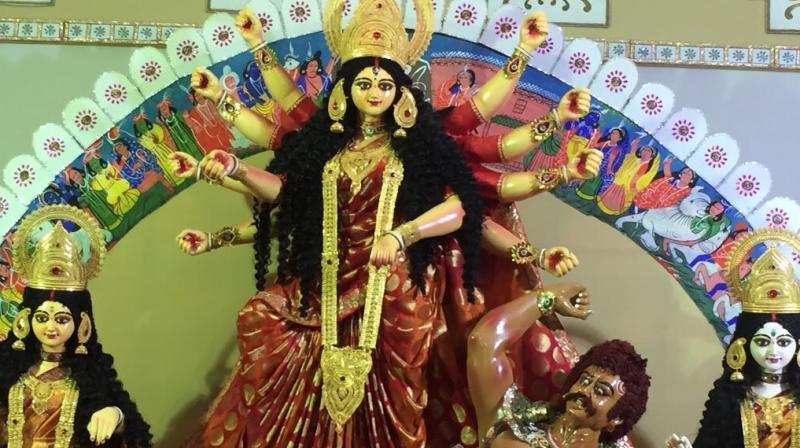 Each day is devoted to different forms of Goddess Durga, different colour and varied meanings.

Dusk is falling, lamps are lit, the autumn air is cool and still.

The bells are calling from afar, Come join in Mother’s adoration hour”

The festival of Sharad or Maha Navratri, a post monsoon autumn festival, is the time to celebrate the shakti of the Hindu divine feminine goddess Durga and her many manifestations. It is a time to immerse oneself in the glory, power and aura of Maa Durga.

The beginning of autumn is a time of climatic change and solar influences. The period of change requires some restrain (in the form of fasting and food) as well as celebration. Sharad Navratri is the most widely celebrated festival of all the four navratris, along with Vasant Navratri (spring season). It marks the end of the monsoon and is observed during the lunar month of Ashvin. Sharad Navratri symbolises the victory of good over evil and its nine days are full of significance and inherent message. Each day is devoted to different forms of Goddess Durga, different colour and varied meanings. The first avatar of Durga, goddess Shailpuri, is the embodiment of the collective power of Brahma, Vishnu and Mahesh.

Legend has it that the world was created with the smile and laughter of Devi Kushmunda, one of the incarnations of the goddess. The creator of the universe, the fourth form of the devi, had the power to reside inside the Sun. As an unmarried brahmcharini, Parvati is filled with bliss and happiness. She bestows peace, prosperity and grace. Goddess Chandraghanta, after her marriage to Lord Shiva, adorns Chandra (moon) on her forehead. There is tranquility and abundance in life. There is laughter, happiness and peace in the form of Kushmunda.

The fifth avatar of Parvati Maa, Skandmata, symbolizes the power as well as vulnerability of motherhood. A mother can crush any enemy and face every danger to safeguard her child. A mother of Skanda, also known as Kartikeya, is said to ride a lion along with the baby in one of her hands. This form of the goddess blesses her devotees with salvation and grants wisdom.

The sixth day of Navratri  is dedicated to the “Warrior Goddess”, Katyayini. She is an epitome of courage. Next day, she adorns the avatar of Kalratri, a fearless, fierce Durga who, holding a sword, had killed two demons — Shumbha and Nishumbha. The eighth avatar of Maha-Gauri represents serenity, calmness, peace and intelligence. The ninth incarnation, goddess Siddhidhatri, is a “giver of wisdom”. She is known to have supernatural “healing” powers. The ultimate avatar represents a blissful state of mind.

These nine holy nights, Navratris, are in fact a mirror of our mundane life, leading to the path of salvation. The ideas of creation, birth, bachelorhood, marriage, motherhood, children, struggle to fight the evil and bad forces symbolize our life. This world is full of laughter as well as struggle and we require the traits of courage, intelligence and calmness to attain peace and  prosperity in this world.

The nine manifestations, known as Navdurga, represent all the cosmic energy of the universe. Every person is blessed with this energy. Need of the hour is to recognize it and awaken it.