Educated parents can provide supplementary help at home and if they can afford it send their children to private tutors and/or private school. 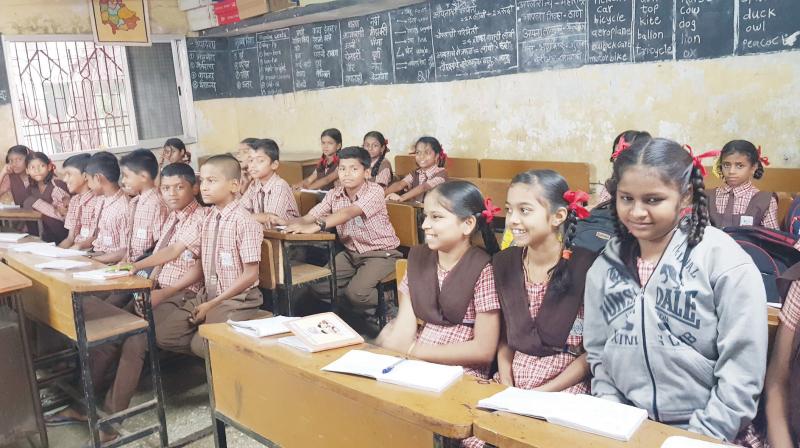 According to ASER 2016, 27 per cent children in Class 8 are unable to read a Class 2 level textbook and 57 per cent are unable to do simple division that is taught in Class 4. (Representational image)

The Right to Free and Compulsory Education guarantees elementary schooling to all children in the age group of 6-14 years, and by 2016, the percentage of such children out of school had come down to 3.1 per cent. Simultaneously, the government launched the Rashtriya Madhyamik Shiksha Abhiyan in 2009 to enhance access to secondary education.  However, transition rates to secondary schools remain low.  In ASER 2016, the percentage of 15-16-year-olds who were out of school was 15.3 per cent.

The period from age 14 to 18, between elementary school and adulthood, are crucial years in the life of a young person — years when life-changing decisions about career paths are made.

The transition from elementary to secondary school happens during these years, and if a youth drops out at the end of Class 8 or 10, it is more than likely that he or she will not return to complete his/her studies.

Based on a sample of almost 30,000 youth from 26 rural districts across 24 states, ASER 2017 gives a snapshot of the lives of these young adults: What are they currently doing? Do they have foundational reading and math abilities, and can they apply these to simple everyday tasks?  Are they digitally and financially aware? What are their aspirations for the future?

ASER 2017 finds that most 14-18-year-olds are in the formal education system — only 14.4 per cent are not currently enrolled in school or college.

However, this number varies a lot with age.  At age 14, only 5.2 per cent are not enrolled, but this percentage increases to 30.2 per cent at age 18.  With almost 10 per cent of India’s population in this age group these percentages translate into large numbers of youth who are not in the formal education system.

So what are these unenrolled youth doing?  Are they taking a vocational course? After all formal education is not for everyone and the government is putting a lot of energy into promoting vocational skilling as an alternative to formal schooling.  Unfortunately, very few youth seem to be enrolled in vocational courses.  Overall, only about 5.3 per cent youth are enrolled in such courses and among those who are not currently enrolled, this percentage is only slightly higher, at 6.2 per cent.

If they are not in the formal or vocational education system, does this mean that they are working?

Even accounting for work and enrollment in a vocational course, one-third of youth who are not currently enrolled in the formal education system are not doing anything.  Those who are working are probably doing so in low productivity jobs given their age and education profiles. This does not bode well for their future.  The natural question to ask is — why did they discontinue their studies?

About one-fourth of the youth said that they had to discontinue their studies because of financial reasons.

The correlation between SES characteristics and dropout rates is well established.  In our sample as well, youth who have dropped out come from more disadvantaged backgrounds.

Apart from SES factors, a large proportion of youth cited “lack of interest” as a reason for leaving school.  Why is school not interesting?

These learning deficits are observed across all grades and accumulate with each grade.  How is a child who is unable to read and do simple arithmetic supposed to traverse the curriculum of Class 8 that includes algebra, science, and geography?

It is easy to blame the teachers, but the brief to the teacher is to complete the curriculum.

There is no mechanism within our school system to effectively address the needs of children who have fallen behind.

Educated parents can provide supplementary help at home and if they can afford it send their children to private tutors and/or private school. But the learning deficits of children who don’t have these advantages — affluent and/or educated parents — are not addressed either in school or at home.

The problem is further exacerbated by the automatic promotion policy (up to Class 8) introduced by RTE, which enables a child to progress up to Class 8 without anyone figuring out that he or she needs help.

A recent study done by the ASER Centre shows that learning levels in Class 8 are extremely good predictors of transition to secondary school.  In the ASER 2017 sample, as well, the learning levels of out of school youth are far below those still in school.

Even after taking family characteristics into account, poor reading and math skills remain significant contributors to the probability of dropping out of school.

For instance, consider a 15-year-old who doesn’t live in a “pukka” home, whose parents haven’t been to school, who is not a fluent reader and cannot divide.  The probability that this youth will drop out is 33 per cent. Affluence in the form of a “pukka” home reduces this probability to 25 per cent; having educated parents reduces it to 18 per cent.

But far more than affluence and educated parents is the impact of basic foundational skills — the same 15-year-old living in a non-pukka home with parents who have never been school, has only a 10 per cent chance of being out of school if he or she is a reader!

ASER 2017 extended the standard foundational ASER assessment to include tasks that young persons would need to do in their daily lives.  On all competencies, youth who are not currently enrolled do worse than those who are enrolled.

Consider a simple task like counting money — youth were shown a picture of currency notes and asked to calculate the total amount. Among youth who had completed eight or more years of formal schooling, 60.5 per cent of those who were not currently enrolled could correctly answer the question as compared to 81.5 per cent of those currently enrolled.  On a slightly more difficult task of calculating a 10 per cent discount on a T-shirt that was on sale, 29.4 per cent of not enrolled youth with eight or more years of schooling could answer correctly compared to 40.3 per cent of enrolled youth.

Clearly, there is something about being in school, over and above the completion of certain years of schooling, that imparts a degree of confidence to youth. This is also borne out by the rate of non-response with far more out of school youth remaining quiet when asked to do simple tasks or probed about their aspirations.

These young men and women who have decided to discontinue their education, sometimes for reasons beyond their control, need support — from their families and communities, and from the education system.  Without this support they are likely to remain at the margins of society with all their potential going unexploited.  Instead of hiding them, we need to shine the spotlight on them and give them opportunities so that they excel in any field they choose to be in.