In Islam too the planet moon plays a significant role because of the use of a lunar Islamic calendar to determine the date of Ramzan. 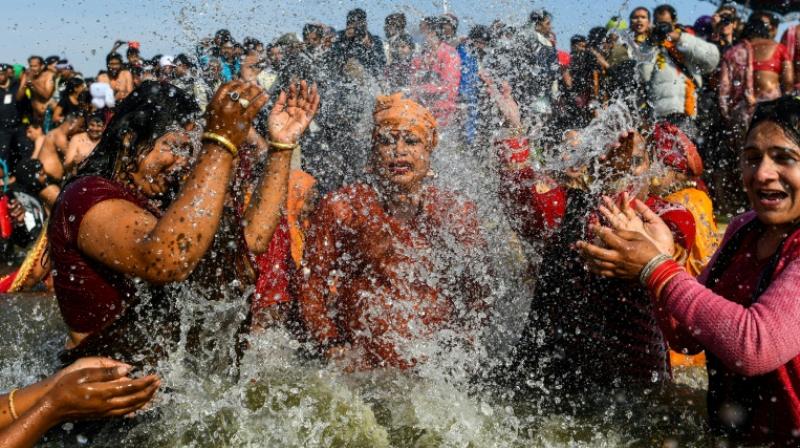 The Kumbh is celebrated with the belief that due to certain planetary positions, the positive energy levels of that particular place during a particular time, increases to its peak, thereby providing an atmosphere for spiritual growth and enlightenment. (Photo: AFP)

After meticulous preparations, the Ardhmahakumbh at Prayagraj opened officially this week. Millions of people will take a dip in the Holy Ganges over the next few weeks. I was among the approximately 120 million people who visited the Mahakumbh in 2013 but felt too cold to take a dip. I was richly inspired by my short visit there. While for some it is a deep expression of their faith, for others it is also a spiritual search of the divine. The Kumbh is celebrated with the belief that due to certain planetary positions, the positive energy levels of that particular place during a particular time, increases to its peak, thereby providing an atmosphere for spiritual growth and enlightenment.

In Islam too the planet moon plays a significant role because of the use of a lunar Islamic calendar to determine the date of Ramzan. The crescent moon, known as Hilal, defines the start and end of Islamic months. And it is only after sighting the moon that the Ramzan fast is broken.

In the just concluded Christian festival of Christ’s birth, the star plays an important role to help find the newborn baby Jesus, eventually leading to a path of spiritual growth. The Bible narrates the story of this special star thus: “After Jesus was born in Bethlehem in Judea, during the time of King Herod, Magi from the east came to Jerusalem and asked, ‘Where is the one who has been born king of the Jews? We saw his star in the east and have come to worship him…’ they went on their way, and the star they had seen in the east went ahead of them until it stopped over the place where the child was.”

Last Sunday Christians celebrated the feast of the Baptism of Jesus. The whole event takes place at the sacred river Jordan. Again quite a few important events in the Bible take place on high mountains, be it Moses receiving the Ten Commandments or the transfiguration of Jesus.

While it is important to note that in Christianity planets, rivers, mountains etc. are not worshipped but only God the creator of the universe, the Bible does place great importance on nature. In fact nature too worships and glorifies God. Psalm 19 says, “The heavens declare the glory of God; the skies proclaim the work of his hands. Day after day they pour forth speech; night after night they reveal knowledge…”.  Or elsewhere, “Lift up your eyes on high and see: who created these?”

Be they holy rivers, mountains, stars, planets, or indeed our scriptures or the inspiring lives of holy men and women including those of our helpless neighbours needing us, they can all help us in some degree to set off on our spiritual path to finding God.