Vajpayee wanted to allay Pakistani fears that India, particularly his own party, the BJP, wanted to undo the Partition of 1947. 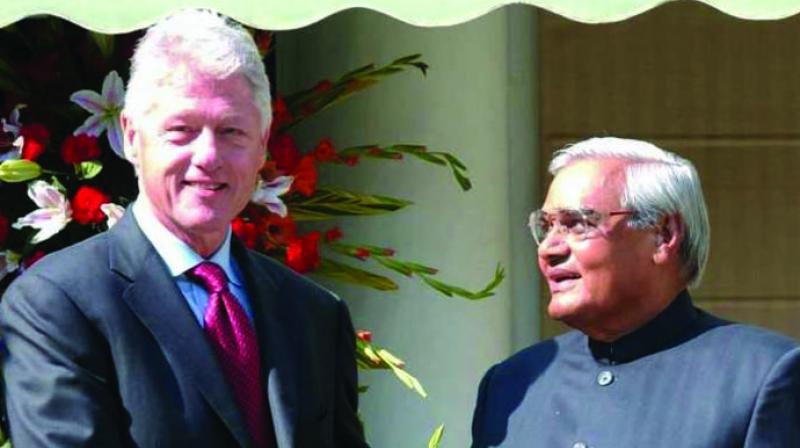 As obituaries pour in for late Prime Minister Atal Behari Vajpayee, who passed away earlier this week, three words keep reappearing — orator, statesman and peace-seeker. His speech on the lawns of governor’s residence in Lahore on February 21, 1999 brought all these in play. Vajpayee came to Lahore by bus, crossing at Wagah in a symbolic outreach to Pakistan, accompanied by Punjabi icons like Dev Anand, educated in the 1940s at the Government College in Lahore. He wanted to allay Pakistani fears that India, particularly his own party, the BJP, wanted to undo the Partition of 1947. Vajpayee had earlier gone to the Minar-e-Pakistan, marking the spot where the All-India Muslim League passed the resolution for a separate Muslim nation on March 23, 1940. He said some “sathis” (associates) warned that by doing so he would grant legitimacy to Pakistan. Pausing, in typical Vajpayee style, he added that Pakistan does not need legitimacy from him. With one anecdote, he was not only reassuring Pakistanis that his government did not seek their nation’s destruction, but more significantly messaged the fringe of his party at home to abandon anachronistic slogans seeking the destruction of Pakistan. This was a masterly blend of diplomacy and domestic politics in Vajpayee’s mellifluous oratory.

Three elements stand out in the Atal Behari Vajpayee government’s conduct of foreign policy. One is his repeated engagement of Pakistan despite many setbacks and betrayals like the Kargil intrusion in 1999 and the terrorist attack on the Indian Parliament in December 2001. His Lahore bus journey underscored both the need for connectivity and for ordinary people to be drawn into this process. He invited Gen. Pervez Musharraf to Agra in July 2001 despite his cardinal role in the Kargil attack and his deposition of the Nawaz Sharif government. Neighbours, Vajpayee often said, cannot be changed, unlike friends. But, at the same time, Vajpayee had red lines, as Gen. Musharraf discovered when he was sent back empty-handed, having gambled on a Kashmir-centric approach within a timeframe and on terms of Pakistan’s choosing. Vajpayee the nationalist, ever perfectly tuned to public opinion, overruled Vajpayee the sentimental poet-statesman.

He tried finally in 2004, after a protracted military standoff following a dangerous terror attack on the Indian Parliament in December 2001, by relenting to visit Pakistan on eve of the Lok Sabha elections for the Saarc summit. The precondition was a public commitment by President Pervez Musharraf to not allow Pakistani territory to be used for aiding and abetting cross-border terror. It was preceded by a ceasefire agreement in 2003, which largely held till 2016 and the tumult in Kashmir after killing of Burhan Wani. But Vajpayee’s goodwill was negated repeatedly by the structural dissonance between the peace-seeking Pakistani civilian governments and the Pakistan Army’s compulsive desire to overturn the territorial status quo, annex the Kashmir Valley and seek parity with India. His successor built on the ground prepared by Vajpayee but met the same fate with the 2006 Mumbai train bombings and the 2008 attacks in Mumbai on 26/11.

It is often forgotten that the India-US bonhomie of the UPA days and now under the Narendra Modi government stems from the strategic decision of the Vajpayee government to test nuclear weapons in May 1998. The initial reaction of the Western nations, particularly the United States, with France as the sole exception, was strident. But it forced the US to reassess India as a potential pillar of the international order rather than merely a supplicant seeking economic engagement. It took months of dialogue between US deputy secretary of state Strobe Talbott and external affairs minister Jaswant Singh to re-establish trust for India-US relations to rise phoenix-like. President Barack Obama was to later call it the most defining relationship of the 21st century. Symbolising restored mutual confidence was the March 2000 India visit by US President Bill Clinton. His fleeting swing through Pakistan and address to the people, over the head of the military ruler Gen. Pervez Musharraf, brought a new salience to India-US relations as US was seen as beginning to recognise Pakistan as the epicentre of terror.

The third significant diplomatic achievement, after an initial glitch when defence minister George Fernandes used some undiplomatic words, was Vajpayee’s China policy. In Brajesh Misra, principal secretary and national security adviser (a newly-created office), Vajpayee had a former diplomat with great personal China experience. The special representatives (SRs) were appointed, and continue to date, to deal with boundary issue. The June 23, 2003 Declaration on Principles for Relations and Comprehensive Cooperation was a stepping stone to the April 11, 2005 signing of Political Parameters and Guiding Principles for the Settlement of the India-China Border Question, which the successor government led by Dr Manmohan Singh finessed. Although the Chinese have later dragged their feet, concomitant with their economic and military rise, these are fundamental to any meaningful détente between the two Asian giants.

In retrospect, Gen. Musharraf erred in overplaying his hand at Agra as in Vajpayee he had a leader who could have sold to the Indian people any concession that would be a condition precedent to settlement of complex and old disputes like Siachen and Kashmir. The one blot that lingers is the exchange of high-value terrorists for the highjacked hostages at Kandahar, following multiple security lapses that allowed the highjacked plane to leave Indian airspace. But overall, Vajpayee surrounded himself with gifted politicians like Jaswant Singh, Yashwant Sinha and George Fernandes. They left an India positioned to be a potential pole in a mutating global security scenario. Manmohan Singh and Narendra Modi owe more to Vajpayee’s foreign policy than they may concede. But history will treat both P.V. Narasimha Rao and Atal Behari Vajpayee well, as the shapers of the post-Cold War and post 9/11 Indian foreign and national security policies.

Aakar Patel | Draw lessons from US, make voting in India better and safer

Kushal Gulab | A woke Navratri, and a Happy Dussehra