The rain had a redeeming ring to it. It helped the quiet umbrellas defeat the loud national flags, which went limp in a single squall. 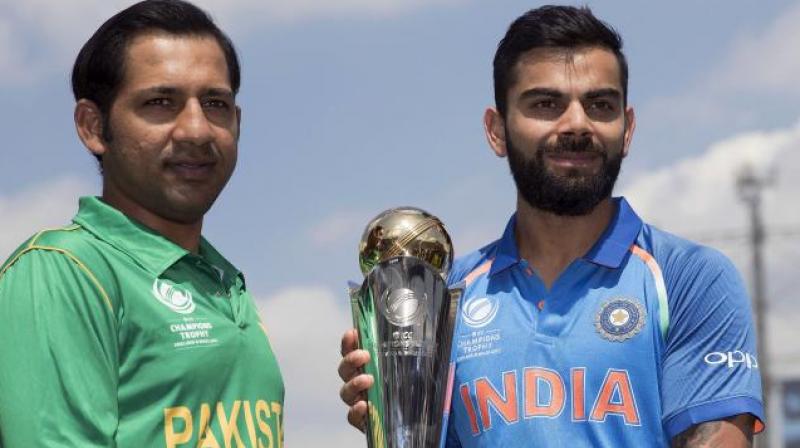 The weather at Old Trafford so resembled Pakistan-India ties, unpredictable and terrifying with looming stretches of grey. But short spells of sparkling sunshine seemed assured too. (Photo: AP)

The weather at Old Trafford so resembled Pakistan-India ties, unpredictable and terrifying with looming stretches of grey. But short spells of sparkling sunshine seemed assured too.

The rain had a redeeming ring to it. It helped the quiet umbrellas defeat the loud national flags, which went limp in a single squall. A woman in a row ahead of ours, in fact, used the flag she had been waving to wipe her wet seat, but not before assuring that no one was looking. We shall not reveal her country, but her act did show that an instinct for self-preservation has been a key factor in human evolution, and in a crunch situation, it subsumes obeisance to vestigial identities.

Global warming has played havoc with this World Cup schedule. I’m told even the notoriously wilful Manchester weather produces clear and balmy skies at this time of the year, not the surprises that have already taken an inordinate toll of too many matches. Rain may not have helped Pakistan in the series, but it is also true that it prevented the country from being deleted in the World Cup it eventually won in 1992. Pakistan were a far better side than they are today. Yet they were bundled out by England for a paltry 74, an embarrassing washout for a team boasting of Inzamam-ul-Haq and Javed Miandad, Saeed Anwar and Ramiz Raja. The rains caused a washout at Adelaide and gave us a crucial point.

There is an outcry in Pakistan about an allegation that some members of the squad were having a night out before the match. The accusers wouldn’t be saying this had the outcome been different to what it was. Let me say this. I once had a conversation with Pakistan’s pace guru Sarfraz Nawaz in Dubai. He was slurring by the time we parted in the wee hours before the Sharjah match. All that Sarfraz would say was that he would take two Indian wickets the next day. I think he took three. The better team won on Sunday, which has little to do with anyone’s night out.

But there is something else missing in this Pakistani squad. Who plays Javed Miandad or Zaheer Abbas? Where is their Fazal Mahmood or Wasim Akram? Babar Azam and Fakhar Zaman played quality shots against India, but they betrayed the lack of depth and experience of Saeed Anwar.

My memory of cricket is crowded with the romance of the 1960 match in Kanpur between India and Pakistan, which ended in a draw. The thought of seeing Fazal Mahmood, Polly Umrigar, Neil Harvey, Ted Dexter, Ken Barrington, M.L. Jaisimha, Wally Grout, Sobers, Kanhai in action still gives goosebumps. Following their feats on the radio with Pakistan’s Omar Kureshi or India’s Melville D’Mello or John Arlott, when England were playing, was more educating than TV commentaries today. Fazal Mahmood and Nari Contractor led the 1960 teams. Their presence on the field was poetry in motion. It was a draw in which Umrigar scored a solid century against Fazal’s sharp leg-cutters, and Jaisimha was stranded tantalisingly at 99. Javed Burki, cousin of Imran Khan, was the highest scorer for Pakistan.

This was the tour in which there was a funny incident between two Indian Muslims in the stands. A caught-behind appeal went up involving keeper Imtiaz Ahmed against Umrigar to a Fazal outswinger. The umpire negatived it. A sherwani-clad gentleman was watching the action on his binoculars. He declared he had heard a click between the ball and the bat. Which got Safdar, the Lucknow wit, engaged. “Sir, can you hear things on your binoculars?” People had a hearty laugh. There was no bitterness, only mirth. Partition was only 13 years old, but both countries looked ready to move on.

It was my conversations with Pakhtun taxi drivers-cum-cricket enthusiasts in Sharjah in the 1980s that I cherish most. They were witty people, subtler than their Punjabi compatriots, and they enjoyed the game without nationalist rancour. The star Pakistani batsman Mohsin Khan was married to (or going to marry) Indian actress Reena Roy. The Pakhtuns called him jeejaji in banter, Hindi for brother-in-law. On one occasion, they were boisterously certain that jeejaji would get Mudassar Nazar run out to help India. That joy and bonhomie were missing at Old Trafford’s one-sided game.