Combating terrorism is a laudable aim and one we support because terrorism causes the death of innocents. 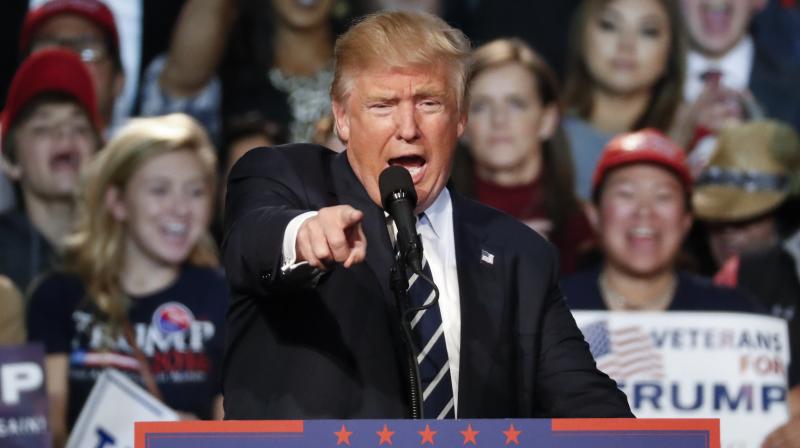 “The conspiracy to deny all conspiracies
Does not exist!”
From Grafitti Bolognese by Bachchoo

The US President-elect announced this week that he will introduce legislation to get every Muslim in the country to register their name and address on a “list”. It is, his aides and apologists claim, not further evidence of the President-elect’s dementia or a cynical ploy to win popular support amongst the intellectually challenged, but a necessary strategy to combat terrorism in America.

Combating terrorism is a laudable aim and one we support because terrorism causes the death of innocents. It isn’t clear how a list, compiled and preserved by local police stations, by the FBI or by a special bureau created and directed by the Oval Office (named The Register of Undeclared Muslim People, or TRUMP for short) would actually prevent terrorism.

A not-very-well-known American statistic comes to mind. It is a medically-sanctioned truth that more people die of choking on their food in the US than die as victims of terrorism. This fact substantiates the argument that all items of food should be listed by an agency similar to the one which will be entrusted to collect the data on US Muslims. People who don’t agree that such a directory of all foods should be created and argue that it would be a waste of time, money and resources, are obliged to say why such a list would not be as useful in preventing deaths as a list of Muslims.

These deniers, who will, of course, be characterised by Trumpeteers as liberal scum, may even argue that it would be useful if the medical profession made a list of the foods most likely to cause death by choking. For instance, oranges or oily parathas may be more guilty of choking the innocent eater than, say, apples or scrambled eggs. I have no medical expertise on choking or on anything else and am reluctant to seek answers on such matters from the Internet, so will have to rely on the above-mentioned medical practitioners to tell the world, or at least those who eat food in the US, if such a list would be useful.

There are very many things that cause deaths in the US. And the world knows, high on the list is the proliferation of guns and their free availability, guaranteed by the American Constitution. I am sure lists of people who own guns exist somewhere, perhaps in the receipts-books of arms emporiums. I don’t think that listing gun-owners has at any time reduced the number of deaths by gunfire. The lists have not prevented the very American mayhem that lunatics, criminals and possessors of weapons in some frenzied or deranged moment cause every day of the week from Maine to Mexico.

The proposed registration of Muslims in this way will, I submit, do nothing to reduce terrorism and may very well make Muslims in America, brown, black and white, feel so alienated from the land of the free that it may increase it. The proposal to draw up such a list is essentially a further ploy in this President-elect’s divisive strategy of spreading and legitimising hatred.

It may very well be that a tiny number of Muslims in the UK, in France, Belgium, Spain and yes, in the US are inclined to hate the country in which they live and, through processes of radicalisation and in the name of Islam, set out to bomb and maim. The intelligence services and the police have sophisticated, but alas not infallible, ways of finding such people and stopping them. They use electronic surveillance and most effectively infiltrating agents and informers. The only informers that the Trumpeteer list will inspire are neighbours who inform on Muslims in their street as European gentiles did for Jews in the Nazi period of the 1930s and ’40s.

The next step, not far removed from passing laws about registration, would be to get Muslims to wear some form of identification as the Nazis did to Jews, Communists, gypsies and homosexuals. Jews were required to wear a Star of David to proclaim their race and religion. It hasn’t happened yet and may indeed be unlikely ever to happen, but all the evidence indicates that some Trumpeteers would be in favour of a crescent or some such indicator pinned to the clothing of Muslims.

Everywhere in the civilised world people wear marks of their religion openly and with pride. Some Muslim women wear burqas and veils, some Muslim men a deliberate cut of beard, orthodox Jews their hats, curls and wigs, Christians their crosses on chains, Sikhs their five symbols, Hindus their bindis and saffron, Buddhists their robes and Rastafarians their dreadlocks. Identity is a mark of pride and the Trumpeteers, like the Nazis before them, want to turn it into a mark of suspicion and shame.

Very few of Donald Trump’s declarations of intent are practicable. Building a 1,000 or 2,000-mile wall and getting Mexico to pay for it is Alice in Wonderland stuff. Getting capitalists to leave cheaper global labour markets and reestablish their manufacture in the US rust belt may win the hearts of the American unemployed but not the votes of corporate boardrooms. Finding the police forces to deport, at first, two million people and then nine million others whom his speeches targeted, is not going to be easy. Lowering taxes is going to leave his treasury unable to finance the Keynesian infrastructure schemes he promises and will increase his country’s debt to China, which can cause chaos if the US puts heavy duties on its exports… one could go on.

And now this list has to include listing Muslims. Are the Senate and the House going to pass such a law? Who is going to implement it? Won’t there be a movement amongst Muslims to resist queuing up to get on the list? Won’t thousands of them risk the penalties for non-compliance and have the world supporting their non-violent, non-registration and anti-apartheidic resistance?