Dry ATMs: Why the banks are getting the runs

The government needs to act to restore public confidence shattered by the shenanigans within banks and the asininity of policy. 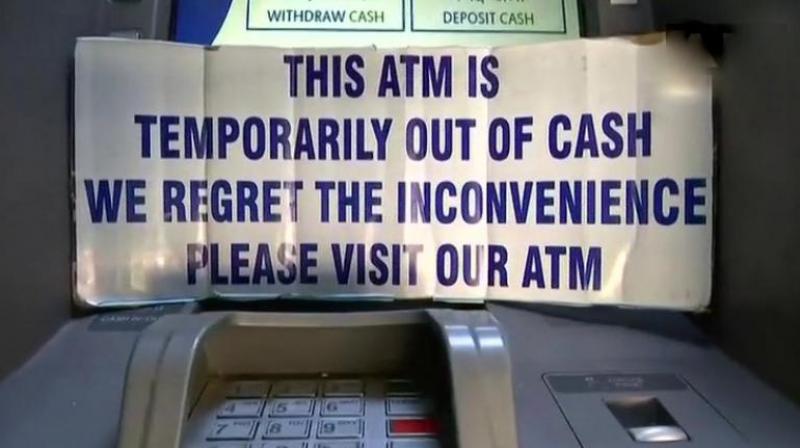 People in many states are complaining of cash crunch at ATMs. (Photo: ANI | Twitter)

Automated teller machines in various parts of the country are running dry; and the situation is particularly hard in Telangana and Andhra Pradesh, which border Karnataka, the land of big bucks elections. The immediate suggestion is that cash is being sucked off to be used by the big parties that are competing to give the people good governance.

Elections and a mild economic revival after a severe self-inflicted economic injury and an impending nationwide general election, and with good people like the Bellary brothers back in the fray clearly means that black is back in a big way. It never really went away, but property transactions and political and bureaucratic corruption that are “cash intensive” affairs somewhat slowed down. Now the property market is picking up and cash is king again. The political scene is hotting up, and once again cash will choose kings too.

The note ban to tackle corruption, black money and terror funding, among other things, reduced the currency levels to Rs 8.93 lakh crores on December 30, 2016, the last day to surrender the banned currency notes.

All these three are back as before, as also the cash.

So there is now a renewed demand for cash. Cash to buy property, cash to buy gold, cash to pay off bureaucrats, cash to fight elections, cash for things like signature suits and Chopard eye glasses, and cash to send abroad by hawala. In short, black is back with a bang! People are now using up cash stashed away in banks.

For some weeks now, people have been asking me on whether the banks will be able to weather the gigantic NPAs of the Anil Ambanis and Venugopal Dhoots, bank frauds by the likes of Mehulbhaiyaya and Niravbhai, and the closed-circuit misdemeanors by the likes of Chanda Kochhar at ICICI Bank? Every bank depositor realises that the money not coming back to the banks is from their money, and is worried.

I went to the bank a few days ago to attend to some pending business. My driver also came in and withdrew cash. As we were going in I casually asked him how much he was withdrawing, and the answer flummoxed me. He said everything. I asked why, and he replied that his neighbors were talking about the impending cash drought. I told him not to be silly, but he went ahead. Since I was with the manager, I wrote out a cheque for Rs 25,000 and asked for it to be cashed. Immediately, the lady queried whether I was doing so based on “some inside news”? The following day the ATMs ran dry.

This reminds me about what Prof. Paul Samuelson (then at MIT), the Nobel laureate and the man who wrote the universally standard economics textbook, told me in reply to a question. I, a bit cheekily, had asked him if he and other vaunted economists ensconced in Harvard’s William James Hall had anticipated the closure of the banks on March 3, 1933. Samuelson replied that he hadn’t anticipated it, nor had any of the great professors. They just deposited their weekly cheques and went home for the weekend. On Monday the banks downed shutters and only the janitor at William James Hall had cash, which he was lending to the professors. The janitor told Samuelson that “something didn’t look quite right”, and so he withdrew all his cash on the Friday before.

To ordinary people, whose money is literally hard earned, the value of what little they may have rises exponentially, and they tend to be more risk averse. Even as depositors were worried about their cash, the government began bandying about its first major banking “reform”, the Financial Resolution and Deposit Insurance (FRDI) Bill, which implied that in a crisis due to NPAs, the banks could dip into the depositors’ cash to shore up their capital. This is commonplace in the world, but in India it acquires a very different meaning, as the government mostly owns the banks. In simple terms to most people it just means that the money the three As and others have taken away would have to be paid by them. The crisis in confidence is now palpable and it seems the aam aadmi is not taking chances, the “mango people” who made good with more easily-earned money tend to be much less risk-averse. Besides, where would they put all their cash?

Once again, the finance ministry has messed up. The ATMs are configured to function best with new currency notes, and clearly the presses are not able to meet the demand. The security printing presses are old and decrepit and plagued with low productivity. Security Printing and Minting Corporation of India Ltd (SPMCIL) is a mini-ratna Central public sector enterprise. It has to be, for how can you be unprofitable when your business is printing cash? The corporation is engaged in the manufacture/production of currency and banknotes, security paper, non-judicial stamp papers, postal stamps and stationery, travel documents like passports and visas, and works under the direct administrative control of the finance ministry’s department of economic affairs.

What we now face is a crisis in confidence in the nation’s banking system. The government needs to act to restore public confidence shattered by the shenanigans within banks and the asininity of policy. I recall the run on the Unit Trust of India in 1998. The Prime Minister was travelling abroad. The finance minister was in Washington D.C. for the annual IMF/World Bank schmoozing session accompanied by the finance secretary. I was left behind in New Delhi at the last moment because Brajesh Mishra, the principal secretary to the PM, scratched my name out. By default I was the senior man on hand. The run seemed induced. The big guns were all away and Brajesh Mishra was typically clueless about such things.

No sooner had the FM reached Washington that he called me and asked me to rush to Mumbai to the UTI to wave the flag, and to show that he was on top of the situation. He spoke to the RBI governor, who then called me at UTI to tell its then chairman, P.S. Subramaniam, that the RBI would make available however much cash he needed to restore the confidence of unit holders. The UTI then pitched a shamiana with banners offering to redeem every unit presented. It was a novel way of doing things, and the media gave it very wide coverage. By the next day the run had abated and soon things went back to normal. Sadly, in UTI’s case, it just meant more investment to shore up the markets and crony capitalist investment.

Finally, this I must say this. Even Yashwant Sinha was a darn sight better finance minister than Arun Jaitley.