Either way, be it a Yameen or a Nasheed proxy calling the shots in Male, its time for India to dust off a fresh Maldives initiative. 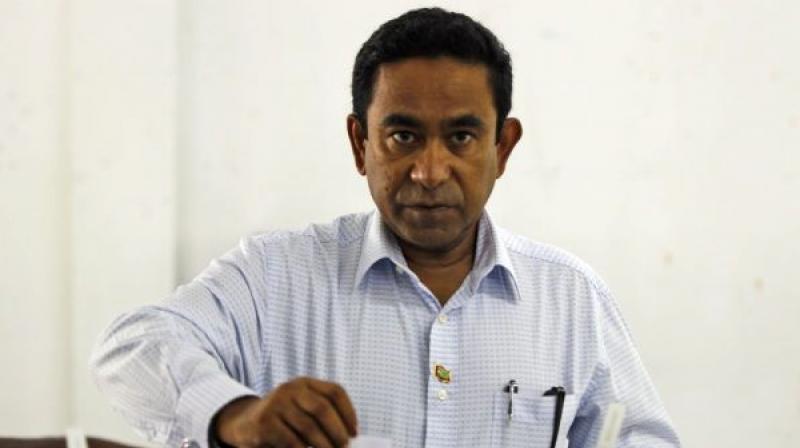 This coming Sunday, the tiny Indian Ocean archipelago that has repeatedly thumbed its nose at India, like few others in the South Asian theatre — barring Nepal and Bhutan — goes to the polls. Incumbent President Abdulla Yameen is seeking a second five-year term in a Maldives that is roiled by uncertainty, with election monitoring watchdogs such as Transparency Maldives openly expressing concern that the presidential polls could be called off at the last minute, as the ruling party is expected to resurrect “farcical plots” as a ploy to impose an emergency.

If he does, it will be the third time that the canny President Yameen would have played the “coup” card.

Both his police chief and defence minister have parroted the same line, saying that they have information about “plots to destabilise the country and create unrest” and warned of “dangerous acts on polling day”, that they say seeks to reinforce the operation narrative to the international community that polls would be neither free nor fair.

President Yameen, in fact, has everything riding on this re-election. If the joint Opposition candidate, Ibrahim Mohamed Solih, wins — given that the election is free and fair — retribution will be swift. The President could face impeachment and jail. In 2013, Mr Yameen’s margin of victory against the popular Mohammed Nasheed was a wafer-thin 6,300 votes out of a voter base of 260,000 voters. This time, the incumbent must ensure  that “Ibu” Solih, a candidate backed not just by former President Nasheed’s Maldivian Democratic Party but also Gasim Ibrahim’s Jamhoory Party and the Islamist Adalath Party, as well as former President Abdul Gayoom’s faction of Mr Yameen’s own Progressive Party of the Maldives, does not close the gap.

The nomination of Ibu as the joint Opposition candidate after his quiet meeting with mentor Mohammed Nasheed in Colombo, when the latter agreed to step out of the presidential race as did Gasim Ibrahim, was seen as something of a coup. But enough to deliver the coup de grace on Sunday?

Clearly, Mr Yameen has not been complacent. The run-up to the presidential polls has been marked by an unprecedented crushing of dissent, the jailing of anyone who has stood in his way, including his half-brother and “father of the nation”, the pro-India leaning Mr Gayoom whom he has accused of colluding with the Chief Justice to unseat him from office.

The ailing Mr Gayoom’s health is fading, but Mr Yameen has so far refused to allow him to be moved permanently to a hospital or place him under house arrest to facilitate treatment at home amid reports that the family’s plea to allow the 80-year-old to travel abroad was given a thumbs down. Mr Gayoom’s son and son-in-law are also in jail, as is the Chief Justice and two senior Supreme Court judges — openly pro-India — who ordered the release of Opposition leaders who had been detained by Mr Yameen; all 15, uniformly charged with terrorism and attempting to overthrow the government.

Opposition leaders ranging from those in Mr Gayoom’s camp to members of the Mohammed Nasheed-led MDP have consistently been raising their concerns over voter fraud and intimidation, and threats faced by their elected representatives. Eva Abdulla, a serving member of Parliament for the MDP, recounts how she and other members of her party and the Opposition are routinely followed and have their phones tapped.

Mr Yameen’s masterstroke was to place Ahmed Shareef, an activist of his PPM, as head of the Elections Commission, the body that will oversee the polls. Criticism over moves to disenfranchise voters by reducing the number of ballot boxes per island were reversed after popular anger. But two moves, the first, where all information on registered voters was shared by the Maldives EC with the ruling party, and second, the appointment of ruling party members to administer and count the vote on Sunday at two pre-determined sites, has set off alarm bells that plans are being set in motion to intimidate voters and manipulate results, with some of that unease manifesting itself on the streets of the capital Male where PPM election rallies by Mr Yameen’s feared partymen have not been exactly celebratory.

Ms Abdulla says the Opposition is banking on the overwhelming numbers they expect to mobilise against the President to offset the PPM’s tactics, pointing to the results of the local council elections held last year that the ruling party was unable to subvert.

Days before the polls, the Opposition has simultaneously stepped up moves to prove that the President and his circle of advisers, including the former vice-president, had allegedly indulged in “money-laundering, bribery and corruption” to the tune of millions of dollars under the cover of getting a Singapore-based businessman to invest in the Maldives. The Opposition released mobile phone records on Wednesday that showed transcripts of a conversation between the Singapore-based businessman and the Maldivian middleman on the day that the Maldivian President was visiting Singapore. Phone recordings of a conversation between the President and his wife Fahimath, discussing how to manage the poll, have similarly gone viral.

For New Delhi, which has the borne the ignominy of being reduced to a bit player in its own backyard under Abdulla Yameen — his open embrace of China while cutting India out, no doubt, a spillover from governments past — this may be time for a reset. While the Narendra Modi government  has refrained from an open avowal of the united Opposition, its concerns over whether Mr Nasheed is a front for the UK has to be weighed against the growing footprint of the Chinese, with the China-Maldives Friendship Bridge that connected two main islands winning the President major brownie points domestically. Will an undivided Opposition be able to counter a street-smart President who has everything to lose?

Either way, be it a Yameen or a Nasheed proxy calling the shots in Male, its time for India to dust off a fresh Maldives initiative. Benign neglect cannot be the way forward.