Opinion   Oped  21 Nov 2019  Hong Kong’s authorities have dug themselves a hole and there’s no way out
Opinion, Oped

The authorities declared that the protesters holed up on the campus, most of them students, had no option other than to surrender. 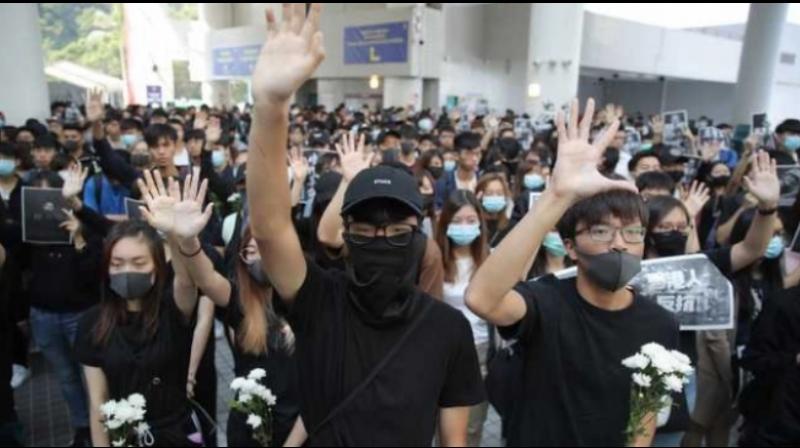 It should hardly come as a surprise that the vast majority of Muslim nations have turned a blind eye to Chinese excesses on this front. (Photo: AP)

The Polytechnic University of Hong Kong was under siege at the time of writing, surrounded by riot police. The authorities declared that the protesters holed up on the campus, most of them students, had no option other than to surrender.

The unrest in Hong Kong, sparked some five months ago by a legislative bill that would have formalised extradition to mainland China, has since morphed into a far broader rebellion, which helps explain why the withdrawal of the offending legislation has failed to mollify the citizenry, particularly its younger components.

When Hong Kong was finally decolonised 22 years ago, the agreement under which the British colonial power handed it over to China specified “one country, two systems”, which entailed relative autonomy for the “special administrative territory” for the next 50 years.

Not surprisingly, the extradition bill was widely perceived as a further dilution of that promised autonomy. At the same time, factions among the protesters who have been waving the Union Jack or seeking American intervention tend to consist of those who are too young to remember the depredations of British colonialism.

Thirty years before the 1997 handover, for instance, when a labour dispute at a factory producing plastic flowers transmogrified into demonstrations and riots, the confrontation led to 51 deaths. The protesters at the time were attracted, rather than repelled, by what Peking — as it was then known — stood for.

Their identification with Mao Zedong’s Cultural Revolution may have been misguided, but perhaps no more so than the tendency among some of today’s revolting multitudes to look to Donald Trump or Boris Johnson as the means of salvation.

Overall, though, the thrust of the current rebellion is towards democratisation and self-determination, which militates against everything Xi Jinping stands for. The Chinese President’s attitude towards nonconformists has lately been underlined by official documents leaked to the New York Times about Beijing’s repression of Uighurs in Xinjiang province, which seeks to effectively obliterate the identity of an ethnic minority on the basis that a minuscule proportion within it strayed towards Islamist extremism.

It should hardly come as a surprise that the vast majority of Muslim nations have turned a blind eye to Chinese excesses on this front. And, among the few exceptions, Turkey can credibly be accused of hypocrisy, given its own attitude towards the Kurds.

The dastardly attitude towards the Uighurs, millions of whom have been incarcerated in “re-education” camps cannot be replicated in Hong Kong, a regional financial hub that hosts hundreds of thousands of expatriates. The idea that the territory would operate under special rules for 50 years may have seemed reasonable at a time when it was presumed that political liberalisation would accompany China’s tendency towards capitalist growth.

But Xi’s ascendancy, in particular, has shattered that presumed paradigm. The economic growth rate has lately slowed, but remains far ahead of the average in the so-called developed world. That hasn’t prevented China from throwing its weight about, including on foreign campuses where Chinese students loyal to Beijing have vociferously resisted any tendencies towards token support for the dissidents in Hong Kong.

Meanwhile, Chinese-controlled state and social media is increasingly inclined towards maligning the refuseniks as not just traitors but terrorists — in what could be seen as another reflection of the Uighur situation. The People’s Daily, a mouthpiece for the Chinese Communist Party, has declared that there is no room for compromise.

If that is, indeed, the official position, there’s no telling where the mass revolt in Hong Kong might lead. The local security forces have thus far resorted to tear gas, water cannons and rubber bullets, with the protesters improvising a violent response with bows and arrows, slingshots, bricks and incendiary Molotov cocktails.

The chaos in Hong Kong has repeatedly shut it down, and it has been suggested that next Sunday’s municipal elections may be put off. That, again, would be provocative. On the other hand, given the predilections of both sides, it is difficult to see where all this will end.

There have been threats of replacing rubber bullets with live fire, but the authorities must be aware that they cannot possibly afford another massacre like Tiananmen Square. And even that, like all other acts of repression — apparently aided in some cases by criminal elements that have a stake in the status quo — would serve only to further inflame passions.

Yesterday, the news was that the security forces were telling the mostly young resisters taking refuge on the Polytechnic University campus that surrender was the only option. Tomorrow’s news may well be that the authorities discover they have dug themselves into a hole from which there is no way out.