Significantly, these demonstrations have succeeded in puncturing the basic foundation on which rested CAA-NRC-NPR’s promotion. 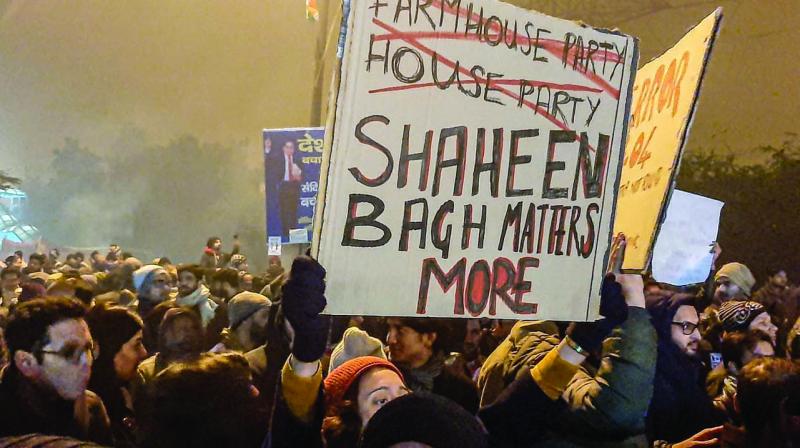 Be it Shaheen Bagh or other places, till the government withdraws CAA, NRC and NPR, these demonstrations cannot technically be hailed as a success. At the same time, their continuity with increasing fervour and the participation of people from all religions as well as age groups signals a strong message. (Photo: PTI)

Aconstitutional dilemma has emerged for power-holders as the country enters the 70th year of its Constitution coming into force. Irrespective of whether the Central government backtracks on its stand regarding the Citizenship (Amendment) Act (CAA), the National Register of Citizens (NRC) and the National Population Register (NPR) or not, most Indians seem firm on continuing their protests against these. A different picture would have surfaced if these protests and demonstrations had gradually fizzled out. They have not. Rather, each passing day is witnessing more and more demonstrations taking place in different parts of the country. Also, the demonstration at Shaheen Bagh in the capital city has prompted Muslim women at other places to come out and voice their stand against CAA, NRC and NPR as well as pronounce their commitment to the country’s Constitution.

Be it Shaheen Bagh or other places, till the government withdraws CAA, NRC and NPR, these demonstrations cannot technically be hailed as a success. At the same time, their continuity with increasing fervour and the participation of people from all religions as well as age groups signals a strong message. They have succeeded in pronouncing their message across the country and also globally. It is not their fault if the government refuses to be moved by their message.

Significantly, these demonstrations have succeeded in puncturing the basic foundation on which rested CAA-NRC-NPR’s promotion. Yes, the government was and is to a degree still hopeful that anti-Muslim communal bias would help it convince people about the necessity of these measures. Just as the government has failed on the Ayodhya front, it has been defeated on its stand regarding CAA, NRC and NPR. True, religion is a sensitive nerve for most people, which in the preceding decades (the 1990s) contributed to the success of the Bharatiya Janata Party (BJP). But that is history now.

Religion still bears a lot of importance for Indians at large. The same, however, cannot be said about anti-Muslim communal bias. But some extremist elements still remain hopeful of this bias having some impact on people at large. This is suggested by the increasing frequency with which anti-Muslim messages are being circulated through various means of communication, including WhatsApp. In these messages, Muslims are being described as a “burden” on the country’s economy, with each Muslim having at least a dozen children, “terrorists” and so forth. Demonstrations against CAA, NRC and NPR are being projected as ones in which people are being “paid” to participate. In addition, the “religious” ideals of Hinduism have been highlighted as facing a “threat” from “communal” Indians.

It is possible these messages are being deliberately propagated to fuel communal tension. There is an uncanny link between the frequency of these messages and the timing of elections. Whenever any election is around the corner, suddenly there seems to be an increase in anti-Muslim communal messages through WhatsApp and other means. Clearly, one motive of those drafting and spreading these may be to unite and gain the Hindu-vote. This also suggests that the present government was probably hopeful of gaining political mileage through CAA, NRC and NPR in the Assembly elections. It was not prepared for the politico-social shock marked by demonstrations against CAA-NRC-NPR.

The attempt to spread communal tension has certainly been defeated by the religious unity and harmony being displayed in the anti-CAA-NRC-NPR demonstrations taking place, continuously, for more than a month now. The ladies stationed at Shaheen Bagh are just a minor percentage of these participants. Nevertheless, hijab-clad women have symbolically spread the message that they are protesting to protect the country’s Constitution. It is their democratic right to do so. Supported by men and women of all religions, the secular nature of their demonstration stands out significantly. Though headlines in the country as well as globally read “Muslim women” at “Shaheen Bagh”, it would not be appropriate to view their demonstration only through a religious lens. Their “success” is marked by the numerical count of their supporters exceeding 100,000 almost daily, the majority of whom are non-Muslims. Democratically, this signals a strong defeat of extremist elements still trying their hand at spreading communal tension.

Against this backdrop, what can be said about comments made by a distinguished politician and senior lawyer about state governments’ stands against CAA-NRC-NPR? In his opinion, state governments cannot refuse to implement that which has been passed by the Parliament. Let us consider this issue from another angle. With due respect to whatever be the legal parameters defining CAA-NRC-NPR, at present, most state governments’ stand against these has been decided by the nature of protests against them. If only Muslims had stepped out, the situation may have been different. Interestingly, Muslim clerics are hardly visible, even at Shaheen Bagh. We are witnessing a New India taking a crucial turn, pronouncing loudly their support for Indian secularism. These Indians are as religious as they desire but without abandoning their secularism. This is a social verdict which several state governments cannot afford to ignore for their own political concerns.

At present, the Central government has refrained from voicing any stand (at least openly) against state governments opposed to CAA-NRC-NPR. Here is the catch. Can it afford to? Also, neither of these measures has specific details about how, when and through which authorities would these be pursued. The Centre has been pushed into a tight corner by demonstrations, escaping which is not an easy task. In essence, a crucial dilemma is posed for the Central government and not state governments opposing CAA-NRC-NPR, thanks to new India’s social verdict!

The writer is a journalist with specialisation in communication studies and nuclear diplomacy. She is also the author of several books.