A ruling that allows protest, teaches the BJP a lesson

The court noted that one of the clauses of the order prevented raising slogans, singing and beating drums. 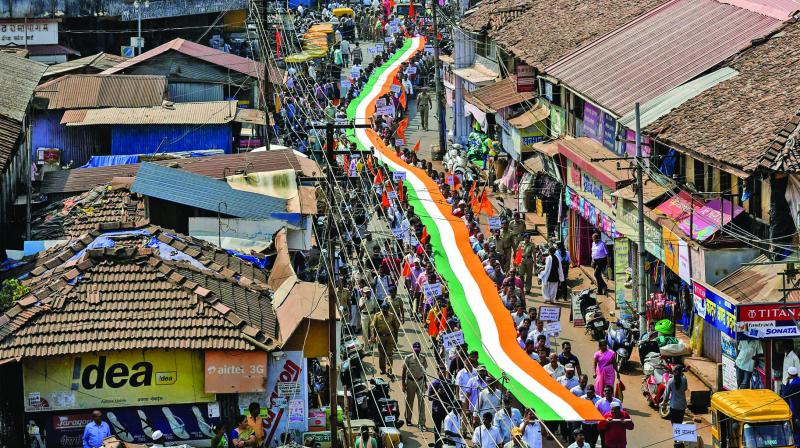 In their agitation against the Citizenship (Amendment) Act, Muslims won the support and sympathies of many cutting across religious and political lines. (Photo: PTI)

The agitations which have swept India against the Citizenship (Amendment) Act have created precedents none imagined earlier. Women predominate, some with babies in arms. So do students. The “right to assemble peaceably and without arms” is a fundamental right guaranteed by the Constitution of India. What is equally accepted is that it is directly related to the fundamental right to freedom of speech.

What is, however, an issue is their right to assembly to express their dissent to official policies or the ideology of the party in power. Minorities, especially Muslims, have faced grave handicaps. If they assemble to support the government’s line, especially on Kashmir, they are hailed as “nationalists”. But, if they assemble to voice their dissent or seek redress for their grievances, they are dubbed “communalists”.

In their agitation against the Citizenship (Amendment) Act, Muslims won the support and sympathies of many cutting across religious and political lines. Silent are the usual Uncle Toms among Muslims, some of whom vociferously support the BJP and denounce Muslims. Some have even been rewarded for this.

On February 13, 2020, the Bombay High Court delivered a landmark judgement, striking down as invalid an order by a police inspector refusing permission for an agitation. It was based on an order by an additional district magistrate. The ruling will encourage all protesters across the country and teach a lesson to the BJP government.

The court said that it had to “keep in mind” that when people believe that a “particular Act is an attack on their rights … they are bound to defend that right”. It underlined that it is not for the court “to ascertain whether the exercise of such right will create a law and order problem … This court is expected to consider the right of such persons to start agitation in a peaceful way. This court wants to express that such persons cannot be called traitors or anti-nationals only because they want to oppose one law. It will be an act of protest and only against the government for the reasons of CAA”.

The court noted that one of the clauses of the order prevented raising slogans, singing and beating drums. “It can be said that though the order … appears to be against everybody, in reality the order is against persons who want to agitate, to protest against the CAA. At present, such agitations are going on everywhere and there was no whisper of agitations of other nature in this region. Thus, it can be said that there was no fairness and the order was not made honestly.”

“When we are considering a proceeding like the present one, we must keep in mind that we are a democratic republic, and our Constitution has given us the rule of law and not the rule of a majority. When such an act is made, some people, maybe of a particular religion like Muslims, may feel that it is against their interest and such act needs to be opposed. It is a matter of their perception and belief, and the court cannot go into the merits of that perception or belief.”

The court had to examine whether such persons had the right to agitate and oppose a law. “If the court finds that it is part of their fundamental right, it is not open to the court to ascertain whether the exercise of such a right will create a law-and-order problem. That is the problem of a political government. In such cases, it is the duty of the government to approach such persons, have talks with them and try to convince them.”

The authorities cannot be of the view that only one particular community or religion had an interest in opposing the law. “Many persons of all the communities may feel that it is against the interest of mankind, humanity or basic human values.”

The US Supreme Court had ruled on these very lines as far back as in 1937. Dirk De Jonge was convicted under a statute, which made it a criminal offence to advocate “crime, physical violence, sabotage or any unlawful acts or methods as a means of accomplishing industrial change or political revolution”. The charge against him was that he had participated in a meeting of the Communist Party, of which he was an admitted member. It had been held to protest against brutality and unlawful activity by the police and conditions of the jail.

Speaking for a unanimous court, Chief Justice Hughes said that “peaceable assembly for lawful discussion, however unpopular the sponsorship, cannot be made a crime … the holding of meetings for peaceable political action cannot be proscribed”. Further, the right of peaceable assembly “is a right cognate to those of free speech and free press and is equally fundamental”.

The US Supreme Court thus linked the right to assemble peaceably without arms to the right to freedom of speech and expression. Processions are described as an assembly in motion. They can make history. Shaheen Bagh in New Delhi has become the name for similar mass meetings in protests all over India.