It must also be borne in mind that the BJP did not fight this election as though it was a routine state election. 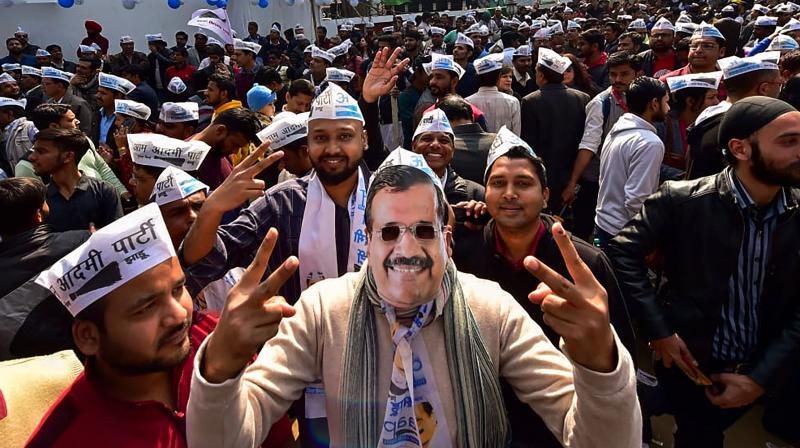 An Aam Aadmi Party worker, dressed as party chief Arvind Kejriwal, celebrates along with others the party's success in the Delhi Assembly polls, at party headquarters in New Delhi. (PTI Photo)

Now that the dust and din of the recent Delhi Assembly elections has settled, there is scope for a considered analysis of the result, and its larger impact on national politics. This is needed because politics is a dynamic process, and even though at the micro level it may appear an inchoate mosaic with no larger inferences, a pattern does begin to emerge every time the people of the world’s largest democracy exercise their mandate.

To put it bluntly, I disagree with the thesis that state and national elections are a binary, and that one has nothing to do with the other. It is true that people have voted differently in state and national elections. Delhi itself proves this point. In the 2019 parliamentary elections, the same people of Delhi voted emphatically for Narendra Modi and the BJP, and AAP came not only second but third in their preferences. This voting pattern can also be seen in other states, such as, most recently, Madhya Pradesh and Rajasthan.

But, absolute compartmentalisation is a myth. Local factors may dominate choices in elections at the state level, but voting preferences are not immune to the state of affairs at the national level. For instance, in Delhi, AAP’s verifiable governance achievements was a key factor in voter choices; but the abysmal state of the national economy, where growth is low, jobs are scarce, business is down, the unorganised sector is in shambles and inflation is at a new high, were also a factor.

Besides, elections in Delhi are not like any other state election. Delhi is the capital of the Republic. People from all parts of India live in the capital, and the echo chamber of what happens here is thus much bigger. Media attention is also commensurately higher, and amplifies, at a national level, the impact of the electoral battle. Therefore, even if Delhi is not even a full-fledged state, the question of who rules the city is a matter of pan-Indian interest.

It must also be borne in mind that the BJP did not fight this election as though it was a routine state election. In the absence of a BJP face for chief minister, Narendra Modi and Amit Shah, the all-powerful duo, directly pitted themselves against Arvind Kejriwal. Almost the entire Central Cabinet was involved, in some way or the other, in the BJP’s electoral onslaught. Over 200 MPs of the ruling party were harnessed into door-to-door campaigning. Reportedly, vast amounts of money and resources were at hand for the BJP’s election managers. The Delhi hustings thus became an arena where the BJP mustered its ammunition as though a national outcome was at stake.

If, therefore, there was a national profile to the Delhi state elections, certain inferences, which are pan-Indian in their import, must be considered. As against the BJP strategy of vitriol, abuse, vilification and open incitement to violence for the sole purpose of polarising the electorate on religious grounds, the people of Delhi overwhelmingly preferred what the AAP had to offer. Broadly, AAP’s message had three basic elements, and these reflect what the people of India may also be looking for at the national level.

Firstly, people want political parties to be governance-centric. They are indicating that beyond the rhetoric and slogans, concrete deliverables, which impact the quality of lives of ordinary voters, are of pivotal importance. Secondly, people seem to want more centrist parties, which shun extreme ideologies, both of the left and the right. Such an expectation resonates with the basic ethos of our civilisational and democratic evolution, and the psyche of the voter. And, thirdly, people want a more inclusive government that abjures the endemic instability, disharmony, strife and acrimony which is an inevitable accessory to sharply polarised politics. They want to get on with their lives within the larger rubric of harmonious co-existence, so as to be better able to enjoy the dividends of the secular mainstream in peace and security.

These three messages have gone out to the entire nation. We may thus be witnessing the beginning of a national challenge to the hegemonic BJP narrative of attempting to win elections largely — if not solely — on the basis of religious polarisation, hatred and divisiveness. The BJP won the 2014 and 2019 parliamentary elections on the promise of Sabka Saath, Sabka Vikas. The Sabka Saath was thrown out of the window long ago, and its epithet was written in bold letters during the Delhi elections. Now, with the economy in a serious tailspin, there is little to show for Vikas too. Divide and rule is thus the only electoral card the BJP seems to have been left with. It is not as though this condemnable tactic does not pay any dividends. In the Delhi elections too, the BJP increased its vote share marginally, only due to the flagrant use of this plank.

The important point, however, is that it was not enough for the BJP to win the election. On the contrary, it was decisively trounced. The Delhi elections are important then for the twin messages, that, firstly, the BJP as an electoral machine is not invincible, and, in fact, may be increasingly vulnerable; and that the Narendra Modi-Amit Shah model of governance, where perennial instability overtakes good governance, can face a serious challenge, even at the national level. What the Opposition now needs is a credible and popular face to match the personal popularity of Mr Modi. That is still work in progress.