Decoding Kesari: Film as politics by other means

Bollywood would naturally produce a version of history that draws the maximum viewers. 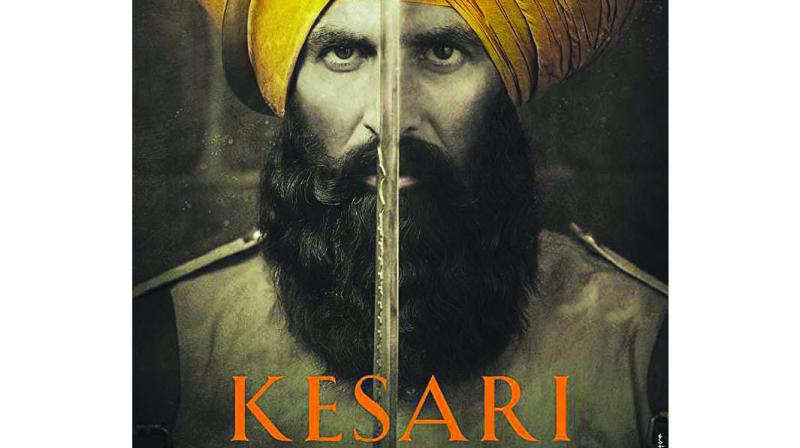 The main protagonist Havildar Ishar Singh in real life would have had a khaki turban and had his beard properly tied, thus not looked like an angry villager just roused from sleep, or a Taliban fighter in saffron.

The Bollywood film Kesari, which is playing now in theatres across India, picturises the iconic last stand of 21 soldiers, plus one attendant, of 36th Sikh regiment of the British Indian Army at Saragarhi in 1897. It raises multiple questions about movies depicting military history. It is possible that the film’s makers are merely riding the jingoistic public mood. It could also be that the movie was additionally intended for political messaging at a crucial moment in India’s electoral cycle. After all, it has been preceded by two movies with political undertones — namely the Accidental Prime Minister and Uri. What were the facts, the historical context and the geo-politics of the Saragarhi clash between 21 Sikhs and a few thousand Pashtuns?

Hollywood has treated the subjects of war and peace diversely. Some outstanding war movies, for instance, did largely conform to the known and recorded facts, taking into account the challenges of picturisation. At other times, it has been argued that most movies take artistic license with facts as history lacks a cinematic plot. Hollywood has used stories from World War II, the Vietnam conflict and now the American intervention in Afghanistan and Iraq since 2001. As pure depiction of a military conflict, the D-Day landings in Europe in the movie The Longest Day have no match. A recent high-definition portrayal of British troops trapped on the beaches at the start of World War II is marvelously done in the movie Dunkirk.

The Vietnam movies follow a different route as the fall of Saigon was really the first defeat of the US military abroad. A propaganda film The Green Berets was made in 1968 by an aged John Wayne to counter the anti-war movement. Apocalypse Now in 1979 was in the genre of new Hollywood films willing to address the absurdity of war, the dehumanising impact of conflict and a different vision of the military, uncoloured by chauvinism. Distinct from these are the Sylvester Stallone-created Rambo adventures of an underdog fighting the American system that had abandoned veterans.

What then should be the purpose of action-war movies? Should they educate the viewer about past military successes, failures, great fights or tragic defeats? Or they are pure entertainment, and the facts can be tweaked to make the plot more palatable. Stephen Marche in Esquire writes that “going to a Hollywood movie for a history lesson is like going to a brothel for a lecture in philosophy”. This may be excessively cynical, and an alternative view is that movies shape our understanding of political events. A study by Notre Dame researchers Todd Adkins and Jeremiah J. Castle concludes that movies are more effective in shaping political opinion than news and advertising. This may be because people come to a movie expecting entertainment and thus are more gullible. They are not alerted to evaluate that a political message is being directly or subliminally delivered. For example, in the post-9/11 movies it is easy to market stereotypes of Muslims as fanatics. In other words, movies can confirm our prejudices in
subtle ways.

The battle of Saragarhi in Kesari thus needs reviewing from this broader context. Bollywood would generally not challenge the prejudices and myth-making of the masses. It has faced public outrage by segments of the population when so doing, as happened with the film Padmavat. Trolls on Twitter angrily asked what was objectionable about Bollywood educating them about past iconic battles? Others wondered what was wrong with the celebration of past valour. If one wants to learn about the battle, there is already an excellent documentary on the Battle of Saragarhi, introduced by a UK-based military historian, Capt. Jay Singh-Sohal.

The counter-arguments are many. Lt. Gen. H.S. Panag, a former Northern Army commander and Sikh Regiment product, felt military history must be treated with greater sensitivity. He noted that the beards of soldiers of 36th Sikh Regiment were never carried open, nor were their turbans saffron, a colour with religious connotation for Hindus, Sikhs and of course the BJP. The main protagonist Havildar Ishar Singh in real life would have had a khaki turban and had his beard properly tied, thus not looked like an angry villager just roused from sleep, or a Taliban fighter in saffron.

The bigger problem is far more substantive. Sikhs in the British Indian Army inherited a martial tradition from the army of Maharaja Ranjit Singh, the first indigenous ruler to control Punjab in a thousand years. After his death in 1839 and two Anglo-Sikh wars, the British annexed Punjab in 1849, thereby inheriting the Pashtun problem. In 1893, after two Anglo-Afghan wars, a boundary was decided, now called the Durand Line. Except in Balochistan, it largely conforms to the frontier of the Sikh kingdom with Afghanistan. The British, turning foe into ally, began raising Sikh troops in the second half of the 19th century, particularly to manage the western border as Russia intruded into Central Asia in 1881-85. The tribal uprising of Afridis, aided by Orakzais, that led to the Battle of Saragarhi, was really Pashtun resistance over their tribes being divided by the Durand Line, including the separation of the fertile Peshawar valley from the highlands.

The Pashtuns have been at the western approaches to India since before the invasion by Alexander the Great. They were both a buffer against invasion but equally participants if loot and pillage beckoned. The Mughals, Ranjit Singh, the British, the Russians and now Pakistan and the United States have not been able to settle the trans-Indus Pashtun problem. The movie Kesari could have framed Saragarhi as combat between nationalistic Pashtuns wanting to recapture the lands Ranjit Singh seized from them and Sikhs fighting to avenge the memory of old hurts like multiple raids into Punjab by Ahmad Shah Durrani, alias Abdali, the founder of modern Afghanistan, as indeed the betrayal by Afghans in the crucial Anglo-Sikh Battle of Chillianwala. On the other hand, it can be a simplistic parable of the children of mother India battling Muslim invaders, which plays into the broader racial memory of Indian audiences.

The saying goes that “drama’s laws drama’s patrons give”. Bollywood would naturally produce a version of history that draws the maximum viewers. But should the regulators, reviewers and television anchors simply play along and be as gullible as the audience or forewarn that the movie may be feeding communal prejudices and that too on the eve of a general election.

Clausewitz had said: “War is the continuation of politics by other means”. It seems that in contemporary India, films are serving that purpose.