Virtual working is just an option for post-corona times 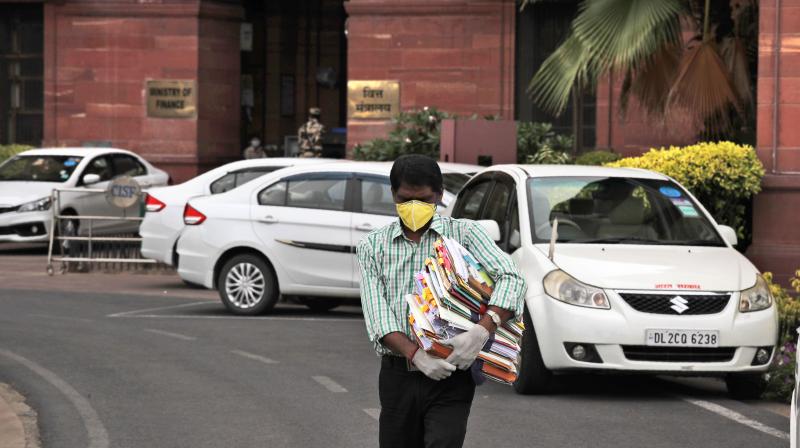 An Indian Finance Ministry employee walks carrying files outside the ministry building on April 20, 2020. An increasing number of officers are opting to work from home amid concerns over the coronavirus epidemic in New Delhi. (AP)

There are enthusiastic claims all around us that the novel coronavirus pandemic may determine how offices and educational delivery work after Covid-19. But before assuming there will be sudden, drastic and permanent changes in the way the world works, let’s just take a step back.

Studies indicate that the countries whose companies offer the most remote working are the United States, Australia and Singapore. In a survey of 750 companies, the most important reason (52 per cent) for remote working option that companies gave was employee retention. A closely related reason (45 per cent) was demand from employees. Even in its limited universe, this survey may suggest people love the luxury of working while spending time with their families. But not everyone may fully agree.

If anything, the lockdown has hastened some social consequences. Domestic violence, child porn consumption and defiance are up. Despite the clear danger the virus presents, compliance with lockdown rules has not been anywhere near total -- the police had to be specially empowered in several countries. Karnataka’s chief minister declared the lockdown was at best a “75 per cent success” in his state. Other chief ministers may be nodding their heads -- albeit privately. A few states have had to deploy drones to track defaulters. There have been several instances of social gatherings. Arguably, any control of the virus has been despite these violations.

The social being inside us

No lockdown can possibly attract enthusiasm. Indeed, the opposite is true. When there are moments of relief -- even artificial and simulated, like symbolic acts of clapping or lighting lamps -- people participate energetically. A national newspaper reported that the response to the prime minister’s call for symbolic activity was “enthusiastic” as a large number of people applauded and lit lamps. Some took it as an excuse to indulge in some social mingling, taking out processions and dancing in the streets. These symbolic gestures of clapping and lighting lamps energised the social being in us.

Reluctance as a nonverbal socio-communicative behaviour is symptomatic of a well-known human phenomenon: People like to be with other people, albeit in varying degrees.

Social communication is the key to sane survival. But are some societies in general more sensitive to solitude than others? Social psychologist Geert Hofstede’s 1980 publication Dimensions of Culture observed -- and his well-established thought continues to explore -- how workplace cultural behaviour among employees across 82 countries was influenced by social cultures.

Among Hofstede’s acclaimed (and sometimes decried) propositions is the idea of collectivist and individualist societies. Individualism, in Hofstede’s framework, is the extent to which people feel independent as opposed to being interdependent as members of larger wholes.

So it’s insightful to note that a British resident says he’s perfectly comfortable complying with the lockdown, while his younger neighbour is having trouble reconciling to the external dependencies the lockdown has invoked. A clinical psychologist who has observed behaviours of isolation in Canada and India told me the patterns are indeed different in that in Canada, aloneness is defined through the lens of individualism, while in India, people link it to loneliness.

Predictably, one form of isolation has a positive connotation while another brings in the idea of something that must be overcome. In India, typically, solitude is not something to be experienced, much less enjoyed. It seems we must overcome it, sometimes at all costs.

If we decide Hofstede’s cultural dimensions work, the United States, Britain, Australia, and many other individualistic societies should be more likely to adapt quickly to social distancing practices than societies in the Middle East, India and Africa, which are considered collectivistic societies. We may debate what causes these differences, but many of us will know from observation that an immigrant from a highly collectivistic to a highly individualistic culture will take a long time to adjust.

But there is a seeming contradiction: People’s social desire to communicate face-to-face at the workplace should be offset by interactions with their families. But people living with families even in traditionally collectivistic societies such as India are showing discomfort staying home. There has been a significant rise in domestic violence all over the world during the current lockdown, statistics show. Funny memes on social media tell you stories of discomfort and discord between spouses -- essentially indicating that everybody’s just better off if family times are limited and the world got back to the old normal.

However, individualism levels may have crept up since Hofstede’s study. A survey among nearly 300 remote managers and team members found the number one priority as well as the biggest challenge for the managers was “fostering a sense of connection without a shared location”. So, should virtuality’s biggest concern be to build human connections? Many expert articles point to one broad agreement: a majority of the positives of remote/virtual work are technological. Many of the perceived downsides are sociological.

Organisations have seen a gradual and incremental adoption of virtual work, and universities have carefully introduced a virtual summer course here and there -- perhaps with the suspicion that taking away physicality can’t be a permanent solution. What Covid-19 may indeed accelerate is a world that offers the option between physical and virtual ways of functioning.