Uneasy truce in a ‘united’ AIADMK

Edappadi proved his majority with the support of Sasikala’s loyalists with 11 legislators of the OPS group abstaining. 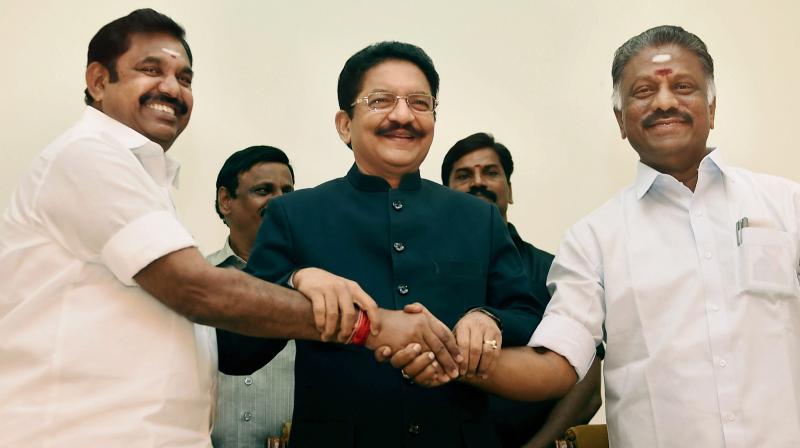 The two warring AIADMK factions have come together over eight months after the passing of iconic chief minister J. Jayalalithaa. The question is whether they will remain united to ensure the Edappadi K. Palaniswami government runs its full term till 2021.

The Tamil Nadu chief minister and his predecessor O. Panneerselvam have said the best tribute they can pay to Jayalalithaa — her parting gift to the party was a fresh five-year term — is to ensure the merger works despite discontent in both camps and despite the threat from deposed deputy general secretary T.T.V. Dhinakaran. Let’s face it. It was a union forced by Prime Minister Narendra Modi, whose long-term strategy was to save the AIADMK from the clutches of Sasikala and reunite the party split by her so that it can reclaim the frozen popular “two leaves” symbol. The dissidence being seen now is a pure case of money power overriding all principles. The primary loyalty in Tamil Nadu politics has been to the money god.Mr Modi, who had a good equation with Jayalalithaa, wants to save the AIADMK from Sasikala. That aside, he and BJP president Amit Shah, naturally enough, also want to exploit the vacuum created by Jayalalithaa’s death and by the virtual retirement of DMK patriarch M. Karunanidhi. The BJP plan is to forge an alliance with a united AIADMK so that it can cash in on the MGR-Jaya votebank and gain a foothold in Tamil Nadu. Senior RSS ideologue S. Gurumurthy has openly said the BJP’s aim is to “cleanse the AIADMK of corrupt elements”, align with it and face the next election with the support of filmstar Rajinikanth to make up for the absence of the charismatic Jaya.

There is a pattern in the way Sasikala has been halted in her tracks at every stage since Jayalalithaa’s admission to Chennai’s Apollo Hospitals in September 2016. When Jaya died on December 5, 2016, it was a signal from New Delhi which prevented Sasikala from taking over. She made a strategic retreat by making acting chief minister O. Panneerselvam a fulltime CM. In February, she got herself elected party general secretary and soon afterwards as leader of the legislature party.When she staked her claim for the chief ministership, the Supreme Court, on a representation from then attorney-general Mukul Rohtagi, delivered the much-delayed verdict in the disproportionate assets case. The judgment went against her, which meant not just a four-year jail term but also a bar on her running for any public office for six years thereafter.Before staking her claim, Sasikala had forced Mr Panneerselvam out of office, leading to his eventual revolt and the resultant split in the party. Before going to jail, she readmitted her nephew Dhinakaran into the party and named him deputy general secretary. She also got her proxy Edappadi K. Palaniswami installed as chief minister with the support of 123 MLAs, all her loyalists.

Edappadi proved his majority with the support of Sasikala’s loyalists with 11 legislators of the OPS group abstaining. Of course, the Opposition DMK and the Congress walked out after its demand for a secret vote was rejected by the Speaker. Till then, Sasikala may have checkmated Prime Minister Modi by installing a proxy government. But Dhinakaran spoiled it all by throwing his hat into the ring in the R.K. Nagar byelection, as he was impatient to grab the seat from Edappadi.The result was the income-tax raids on the residence of state health minister C. Vijayabhaskar and the seizure of a diary containing the names of prominent leaders, including chief minister Edappadi Palaniswami, who had been tasked with the distribution of money. The end result was that the byelection was cancelled. To this day, there has been no followup action on that.

When Dhinakaran was seen as an impediment to the merger, the Delhi police arrested him on the charge that he had attempted   to bribe a yet-to-be-named EC official. After 45 days at Tihar jail, he returned on getting bail and asked, quite casually: “Have they merged?” It was then that he appointed 60 office-bearers, including 20 dissident legislators, pushing Edappadi to defy him by declaring his appointment as deputy general secretary illegal, thus meeting OPS halfway, and waited for the merger. When OPS, who had no stake, played hard to get, a nudge from Mr Modi made him agree. The result is a patchwork peace deal under which Panneerselvam has been made deputy CM and along with him senior leader Mafoi K. Pandiarajan a minister. Panneerselvam and Edappadi have also decided to run the party in coordination with each other.

The merger has led to heartburn in both camps. After the merger, the 19 pro-Dhinakaran legislators have met the governor and withdrawn support. The government, prima facie, now appears reduced to a minority, and the governor will have to ask it to face the Assembly again. If there such a trial of strength, the addition of 11 OPS legislators to the government will be more than offset by the loss of support by the Dhinakaran loyalists. As the DMK and its allies have only 98 MLAs , they cannot form an alternative government. So, as in the aftermath of MGR’s death, a spell of President’s Rule will become inevitable.What Tamil Nadu is seeing is a naked power struggle and neither OPS nor EPS can claim the moral high ground. After all, they were both party to Sasikala’s elevation. OPS revolted only after he was unseated by her, and EPS has survived so far only with the support of her loyalists.As Sasikala has been elected by the general council, she can be removed only if the reunited AIADMK calls a general council meeting again, and elects a new set of office-bearers, superseding all previous appointments.Now that the two factions have merged, the two leaders have to write to the Election Commission - EPS withdrawing his petition endorsing Sasikala’s appointment and OPS questioning its legality. Only then can the EC take note of the merger, close the case and free the “two leaves” symbol.Splits in the AIADMK are nothing new. The party had split after MGR’s death into the Jaya and Janaki factions. But then the squabbling ended within months with the dismissal of the Janaki government, followed by a spell of President’s Rule. But that was before the Supreme Court judgment in the S.R. Bommai case. Thanks to an unstable government, governance has become a casualty in Tamil Nadu. Echoing the public mood, Gandhi Peace Movement leader Tamilisai Mani asked: “Does Tamil Nadu have to necessarily suffer the AIADMK?”