Time for rise of Modi the statesman

It invariably has diminishing returns, the subject targeted compensating by realigning with powers opposed to India. 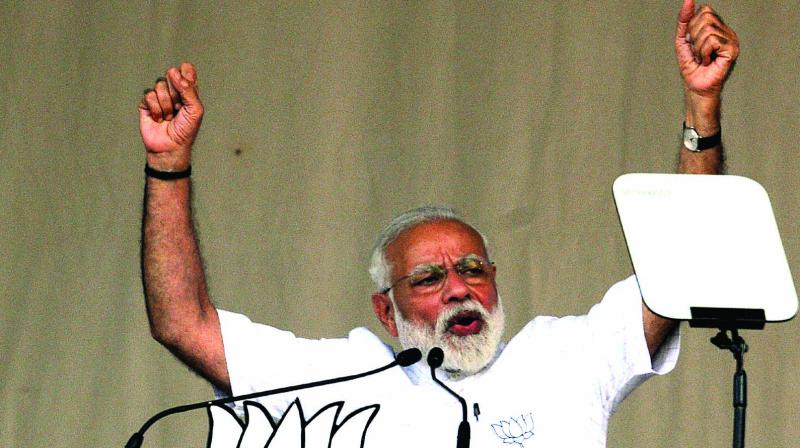 The BJP has returned to power with a strong verdict, crafted by Prime Minister Narendra Modi. The party’s reach now extends well beyond its traditional Hindi heartland fortress. It breached the Trinamul Congress’ defences in West Bengal and, to some extent, the BJD’s in Odisha. It was thwarted effectively only in Punjab, Kerala and Tamil Nadu. Two strands of reaction are emerging in the media — the inevitability of strong leader rule and concern over such concentration of power by a leader who campaigned less on economic success than by rousing the population’s fears and passions. The last has foreign policy implications as sabre-rattling can be a tactic, but not a strategy. It invariably has diminishing returns, the subject targeted compensating by realigning with powers opposed to India. China is realising its counter-productive nature, as it has roused powerful countries on its periphery to align over its bullying in the East and South China Seas.

Prime Minister Modi can take one of many paths. He could let his emboldened right-wing fringe escalate their temple, cow and cultural agendas to move India closer to a Hindu Rashtra, where all walls separating temple from state disappear. This could include constitutional changes to laws affecting Jammu and Kashmir, nationality, sedition, etc. He could, on the other hand, realise that for true greatness he needs social peace and consensus, otherwise the feel-good feeling, inflating his voteshare, can shrink rapidly. Most of his supporters may not have bought into his cultural remaking of India. They may be merely seeking economic betterment, international prestige and a peaceful neighbourhood. Thus, Mr Modi may adopt what the US Republican Party during the George W. Bush presidency called “compassionate conservatism”, or Hindutva light — religiosity with a heart and soul, while strengthening India’s economy and defence capability.

A third possibility, remote as it may sound, could be Mr Modi realising that if his first term was experimentation with policies and whims, this term was to ensure his legacy. He needs to focus on economic renewal as all the fiscal and monetary issues have been swept under the carpet, buried under suspect data. He could restore sanctity of economic data, surround himself with knowledgeable experts, not quacks, speaking truth to him. He could embrace, not pillory, his critics, and bridge the gap between his secular foreign policy and a majoritarian domestic agenda. Britain’s 1960s’ PM Harold Macmillan, replying to a question on what affects the course of government, once said: “Events, dear boy, events”. The euphoria of his electoral success can evaporate rapidly after a bad monsoon, a terrible terror attack or some other unforeseen conflagration in India’s neighbourhood that impacts the price of oil, environment and so on. The proverbial “black swans” are always lurking over the horizon.

Like him, Rajiv Gandhi had got a great opportunity in 1984. The Chinese economic reform had begun after the death of Mao Zedong in 1976. India’s per capita income was higher than China’s when visionary Deng Xiaoping began that process in the late 1970s. Sadly, however, Rajiv Gandhi lost his way under the weight of corruption scandals and poor governance, unable to foresee the end of the Cold War a year away at the end of his term. Similarly, Indira Gandhi, the vanquisher of Pakistan in 1971 and an unchallenged leader, faced agitations and resistance as Jayaprakash Narayan raised the banner of revolt in 1974 over high inflation, unemployment and shortage of essential supplies. The moral is that political cycles can reverse suddenly, particularly when built on emotional grounds and dissimulation.

On the foreign policy front, there shall be basic continuity. Mr Modi will soon head to the G-20 summit in Japan on June 28-29, which will take place against the background of a slowing global economy, persisting if not escalating the trade war between the United States and China and the US standoff with Iran. Europe has been given 60 days by Iran to insulate it from US sanctions or face Iranian withdrawal from the nuclear deal.

Among those telephoning to congratulate Mr Modi was UAE Crown Prince Mohammed bin Zayed, who tweeted his pleasure over talking to “my dear friend Narendra Modi, India’s PM”. US President Donald Trump also intoned to congratulate PM Modi and the BJP on their “BIG election victory!”. The bold letters and exclamation mark is not to be missed. Both these worthies facilitated the repatriation of Indian fugitives from the UAE and Wing Commander Abhinandan Varthaman from Pakistan, which helped Mr Modi’s electoral narrative. The US, Saudi Arabia and the UAE constitutes the anti-Iran alliance, seeking to draw India into their corner. Like Europe, India must balance between these extremely useful, investment surplus or technology-possessing friends and Iran, which provides India a gateway to Afghanistan and Central Asia and is the eventual counterbalance to Pakistan’s Afghan policy. But Mr Modi will discover that international IOUs are difficult to ignore.

Pakistan and its strategic ally China, in embrace since the early 1960s, present the biggest challenge to India in its periphery and the Indian Ocean. China’s investment in Pakistan through the creation of the China-Pakistan Economic Corridor (CPEC) only cements the tie. For the BJP, Pakistan has been a useful bugbear to consolidate votes under the banner of nationalism and a safer India. But this is not a sustainable policy as it only consolidates the Sino-Pakistan alliance. Also, the US and its Gulf allies have their own interests in Pakistan, which they will not abandon to join India in endlessly pillorying Pakistan. Afghan reconciliation, which allows the US to withdraw troops honourably, now tops its agenda. The new destabiliser in the developing Asian power balance is Russia.

To face these challenges, Mr Modi needs to graduate from theatrical diplomatic forays to a new recalibration that allows India to be not just the balancer between rival camps and competing alliances, but a bridge. For that he needs a new team led by an external affairs minister who is physically fit and diplomatically well-heeled and suave. Jaswant Singh met that need for late Prime Minister Atal Behari Vajpayee. Equally, Mr Modi will have to insulate diplomacy from domestic electoral needs. He must also rebuild the domestic political consensus, which unfortunately lies shattered. State elections will beckon soon, particularly in the Indo-Gangetic battlefields of Bihar and Uttar Pradesh. Hopefully, in his second term, Modi the politician will be trumped by Modi the statesman.