To this government, peaceful protests by women are unlawful 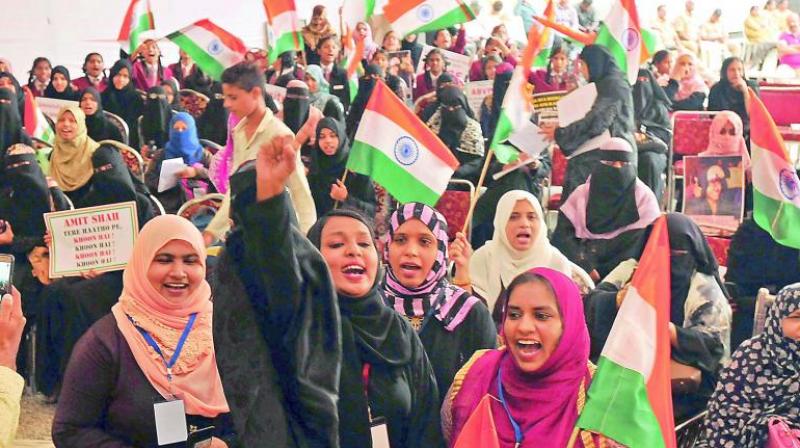 The fear and vulnerability of the central government is evident in the arrest of Pinjra Tod activists Devangana Kalita and Natasha Narwal and, earlier, of Safoora Zargar (in the second trimester of a pregnancy).

That these bright and brilliant women students with a sense of justice have been turned into enemies of the state reflects the nature of that state.

As if turning a pogrom against Muslims into a ‘riot’ was not enough, peaceful protesters against sinister laws have been turned into the cause of the violence. While Zargar is booked under the Unlawful Activities Prevention Act (UAPA), in Kalita and Narwal’s case, they are scrambling for a foothold and have booked them under Sections 186 and 353 of the IPC, though there is no evidence of them having obstructed or assaulted a public servant.

To this government, peaceful protests by women are unlawful. These women become terrorists, working to undermine the integrity and sovereignty of India, which is the rationale of this law.

This would be funny were it not so petty and pathetic. In many ways, it illustrates the critique that a group like Pinjra Tod has mounted since its inception. Pinjra Tod began as a women students’ collective against oppressive and unjust practices within universities.

The important word is collective and it functioned, and continues to do so, as a collective, bringing back the autonomous women’s movement which had waned in India since the neoliberal moment.

Pinjra Tod saw the connections between the various expanding grids of sexual governance that cage women – from the family to the school to the community to the state – and it demanded a breaking out of these cages. Delhi University was its base and it became a forceful presence on the streets on issues ranging from hostel rules to sexual harassment. Pinjra Tods emerged in campuses across the country.

Sooner or later, this was going to threaten a masculinist state fuelled by an ideology of testosterone-inspired hatred, a state Pinjra Tod never flinched from contesting. The creative and brilliant forms of protest it staged, including same-sex marriages in Parliament Street police station, left the heteronormative state flummoxed.

The peaceful protests by thousands of women across Delhi and the country late last year were something the state just could not take. Pinjra Tod was part of those protests, making its critique of the national that it has always made – ‘We won’t Mother India – nationalism cages women,’ one of its early posters read.

In these times, when social movements are easily fractured and destroyed, Pinjra Tod has stood strong, reminding us of the power of collective politics. That its ground has been feminist is proof that the autonomous women’s movement is far from dead and that collective women’s voices can make the phallocentric state quake in its jackboots.

From Shaheen Bagh to Bilal Bagh, women have shown us this and if all the state can do is arrest individual women students on fabricated charges, it is a sad and sorry statement on that state.

The psychic fragility of this state is not hidden behind its bellicose rhetoric or its pusillanimous arresting of individual women or the hordes of men on the internet cheering the arrests and spewing sexist and misogynist abuse against these women. Indeed, it is only exposed.

That the most robust and critical voices must be harassed and incarcerated shows the health of this state and the culture it wants to create. It is a culture in which no analytic voice will be tolerated, no critical dialogue will be entertained, where rational instruments like the law will be used against the rational. It is a culture of unquestioning assent and students who do not assent will be jailed.

Feminism is the longest revolution,Juliet Mitchell tells us and, to her, feminism is an unqualified success because as her friend Jacqueline Rose puts it, it is “the one you never give up on even in the knowledge that it is unlikely ever to come to an end.”

The arrests of these brilliant, thinking women masks the hundreds and thousands of women with them in collective forms of thinking. These women show us that the battle is far from over.

By arresting Kalita and Narwal, this sad and sick state has only strengthened Pinjra Tod. As gay Greek poet Dinos Christianopolous’ line which became a proverb used in Mexico for students who were disappeared in Ayotzinapa, goes ‘They tried to bury us but they did not know we were seeds.’ A million Pinjra Tods have sprouted.