The unfortunate cinematic distortions of history

The Indian soldiers who perpetrated the uprising were — let’s face it — mercenaries of the East India Company. 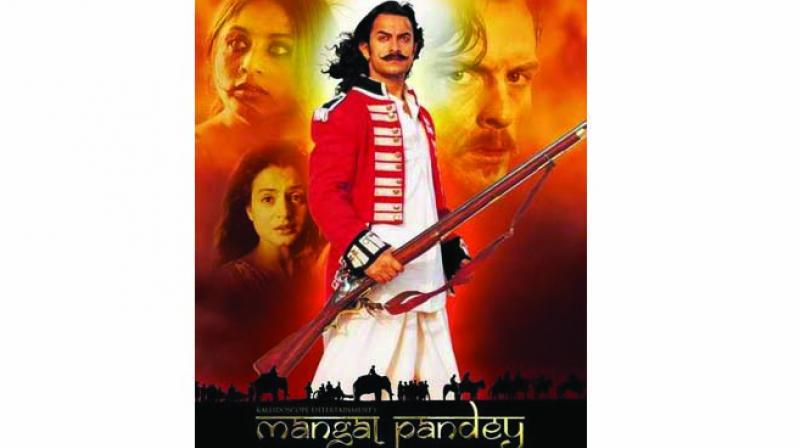 There is no doubt that the Indian Mutiny of 1857 began in a few places, one of them being Barrackpore where Mangal Pandey shot a British officer and was tried for murder and mutiny and hanged.

On this brief sojourn in the old matra vatan I have, through some inexplicable obsession, been thinking about the unfortunate cinematic distortions of history. I suppose this recurring thought is possibly occasioned by a memory of being accused of such a distortion myself some years ago.

I wrote a film once called The Rising in its English version and Mangal Pandey for the consummate director Ketan Mehta and the incomparable star Aamir Khan.

The film, before its release (or was it after?) ran into legal trouble. A couple of jokers, without any collaboration between them, claimed that they were direct descendants of the character Mangal Pandey and that the film had portrayed him in love with a dancing girl. The portrayal had brought his heroic memory into relative disrepute.

These clowns, or one of them, took to the courts to right this wrong. It was unclear to me, to the producer, director and the stars which law our film was guilty of transgressing. I happen to know, as any lawyer will confirm, that the libel laws don’t apply to the dead. That being said, I am sure that saying untrue things about Mahatma Gandhi, Pandit Nehru or any of our national heroes, if not transgressing any law is, at the least, in bad taste.

The problem with the court case against us was soon manifest. The judge couldn’t see which law had been broken and gave a very learned and detailed judgment about freedom of speech, freedom of artistic construction and idle litigation, which wasted the time of the court and everyone else involved. The case was thrown out and that was the end of the matter.

My own point of view was and is that even if one could libel the dead, being in love with a dancing girl isn’t necessarily disgraceful. I mean Emperor Akbar may not have approved of Prince Salim’s love for Anarkali, but millions of people who saw Modi’s (Sohrab, not the other one) Mughal-e-Azam cheered the relationship on.

As far as I know no one sued the film on the grounds that future Emperor Jahangir had been libelled. I can’t recall any bounty being offered for the murder of Sohrab Modi or anyone else involved with the film or its famous song Jab Pyar Kiya To Darna Kya. A historian friend assures me that this courtesan Anarkali may not have existed, even though others say she was a consort of Emperor Akbar’s and the mother of his son prince Danyal.

In writing Mangal Pandey I did some research. There is no doubt that the Indian Mutiny of 1857 began in a few places, one of them being Barrackpore where Mangal Pandey shot a British officer and was tried for murder and mutiny and hanged. The Indian soldiers who perpetrated the uprising were — let’s face it — mercenaries of the East India Company. They were used by the Company to wage war against their fellow Indians and as such, when they turned against their officers, they became mutineers. We have subsequently acknowledged these mercenaries who delivered large parts of India into the hands of the East India Company as freedom fighters. There certainly were other generals and troops not in the pay of the Company Bahadur, and they can be legitimately called fighters for freedom.

In my research I could find no authenticated account of who Mangal was. The only account that is contemporary and survives is of his court-martial, which doesn’t tell a heroic tale. One may legitimately contend that this record was written by the British and therefore told from their point of view. The heroic constructs were added later in legend and song by Indians.

Now it’s time to admit that my understanding of their injury stems from having myself suffered such when watching certain films. There was Oliver Stone’s Alexander and there was that lying distortion of history called The 300. The first of these, the story of the genocidal maniac Alexander, the Hitler of his time, portrays his war against my Parsi Zoroastrian ancestor Darius III and his conquest of Porus, the Parsi Zoroastrian satrap of the Persian empire, as heroic acts.

Why an American director and a brilliant actor like Anthony Hopkins should descend to this level and make a hero out of a butcher, who out of vanity and alcohol abuse set fire to the Persian palace of Persepolis, remains a mystery. Neither Stone nor Hopkins is a Macedonian.

I was offended by the film but my feelings didn’t stretch to either demanding that it be banned or to offering a bounty to anyone who would kill Stone or Hopkins. And this is not because I have no money to make such an offer. It’s because I respect the right of Stone to distort history for his own feeble, dramatic purposes.

And then there is this other film which turns the Spartan fool Leonidas into a hero for getting 300 of his soldiers slaughtered by a tiny detachment of the Parsi Zoroastrian Persian army of Emperor Xerxes. To portray an idiot, who doesn’t anticipate the wiping out of his 299 men, as a great general and a Napoleonic strategist is, obviously, a travesty. It is doubtful whether Emperor Xerxes, portrayed as the villain, even knew of the existence of Thermopylae or the suicidal maniac Leonidas who couldn’t have been very popular with the widows his vanity left behind.