Will ‘honest politics’ work for Kamal?

Kamal Haasan has been saying all the right things, including the need to practise honest politics. 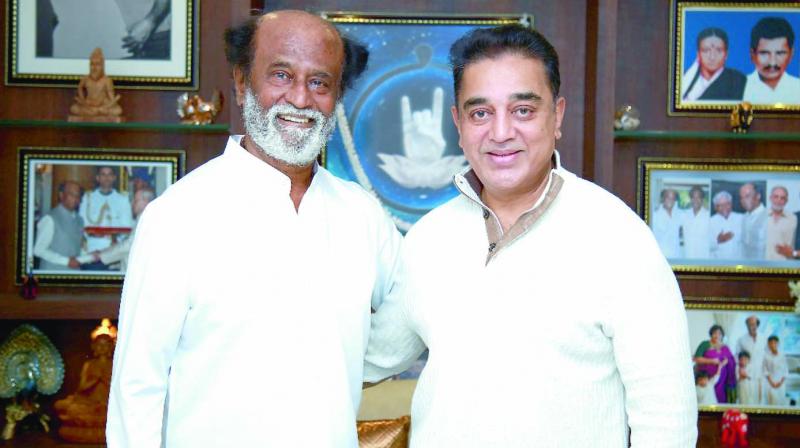 Actors Rajinikanth and Kamal Haasan during a meeting in Chennai. (Photo: Asian Age)

In the southern Indian states they like politics laced with the fantasy world of the cinema. The doyen of Dravidian leaders, M. Karunanidhi, was a film script writer, and a number of actors have successfully donned the mantle of politician in their new avatar, the last of course being the late J. Jayalalithaa.

So eager is the actors’ fraternity to fill the political void that we have competing actors ready to do their duty, with superstar Rajinikanth up and running. And now we have veteran actor Kamal Haasan throwing his hat into the ring with an ambitious agenda of being an honest party seeking justice for the people, calling his new outfit Centre for People’s Justice.

One wonders whether the reputation southern parties have acquired of being corrupt to the core can be changed overnight by Kamal Haasan’s resolve to fight elections honestly. Here again the southern citizen wants something of the fantasy world of cinema to enliven his life.

Mr Haasan has chosen two talismen to light his way, our late President A.P.J. Abdul Kalam and Aam Aadmi Party supremo Arvind Kejriwal. The latter, who has not been very successful in governing Delhi while seeking countrywide influence, was also present at the Madurai inauguration. The former President was of course respected for his devotion to work, but there was nothing very extraordinary about his life story.

Kamal Haasan has been saying all the right things, including the need to practise honest politics. He has the advantage of being proficient in all four dominant South Indian languages as well as in Hindi. Lately, he has sharpened his attack on the Bharatiya Janata Party by suggesting that the colour saffron in the Indian flag should not spill over the whole flag.

Is Kamal Haasan, despite his sincerity and desire to pursue honest politics, a “paper flower”, as suggested by DMK leader M.K. Stalin? The established Dravidian parties do not seem very much perturbed by the Haasan phenomenon. They know that the southern voter needs his cinema-induced fix of larger than life politics, with his idol appearing on the balcony (a traditional leader’s perch) to give him his darshan.

Kamal Haasan’s problem is that he does not claim leadership qualities, comparing himself to a grain of sand, and would rather deal with his voters as citizens. This approach, while pleasing the thinking man, robs the southern voter of the thrills of the cinema world, and a crate of free liquor is not to be sneezed at.

Mr Hassan would seem to be overambitious in seeking honest politics in states used to live life king-size, as in the world of the cinema. To be king or queen even while acting as chief minister of a state comes naturally to our actor-politicians. To take one recent example, Jayalalithaa was every inch a queen. And when she chose to speak, people listened.

Mr Haasan is a popular actor (he is already in the people’s hearts, as he put it) but in forming his new party, he is asking his fans to help him conduct “honest politics”. In other words, he is asking his followers to put aside the fantasy world for bettering the lives of the unfortunate and the wronged.

By all accounts, it seems like reaching for the stars, however noble the aim might be. It remains to be seen how soon the realisation will sink in that the “honest politics” of Mr Haasan’s kind is a plant that may not prosper in the southern states.

Rajnikanth is in direct competition with Kamal Haasan in the political leadership stakes. Although he has praised the impressive Madurai launch of the new party, he let out the riddle by declaring that “let others make noise” — popularly ascribed as an arrow directed at Kamal Haasan. And Rajnikanth has also made it clear that he will continue to act in films even while waiting for political leadership to fall into his lap.

Since Prime Minister Narendra Modi is no respecter of conventions, he has chosen to spend two days in Tamil Nadu in courting the southern voter for his BJP with an eye on the general election. It was indeed extraordinary that he should choose to give women two-wheel drivers a symbolic go-ahead to honour a pledge made by Jayalithaa. The AIADMK, as it exists, may be in the BJP’s pocket, although the DMK remains a force and one has to watch Rajnikanth’s actual performance. The BJP will align with any party that can fetch votes since its priority is to share power in the state.

Kamal Haasan thus might have unwittingly started a new political game in Tamil Nadu, in which the ambitions of individual actors collides with politicians’ plans to produce a new mix of persons who will don the chief minister’s mantle. Rajnikanth is certainly aspiring for the top political job in the state, and seems to feel that a deliberate approach is better than an instant push for the job.

What happens to the mega rally Mr Haasan has announced for April? The rally will no doubt take place and there will be supporters in the wings. But the rally will leave the public of Tamil Nadu unsatiated as there will be no cinematic effects, no reaching for the clouds, only the credo of honest politics.

The main point for Mr Haasan will remain. Has he been too modest in setting his aims? And is he misreading his constituency in what it desires the most? We shall find out in the not too distant future.