Democracy wins? The losers take it all

The people of Maharashtra had spoken and under normal circumstances their wishes should have been respected. 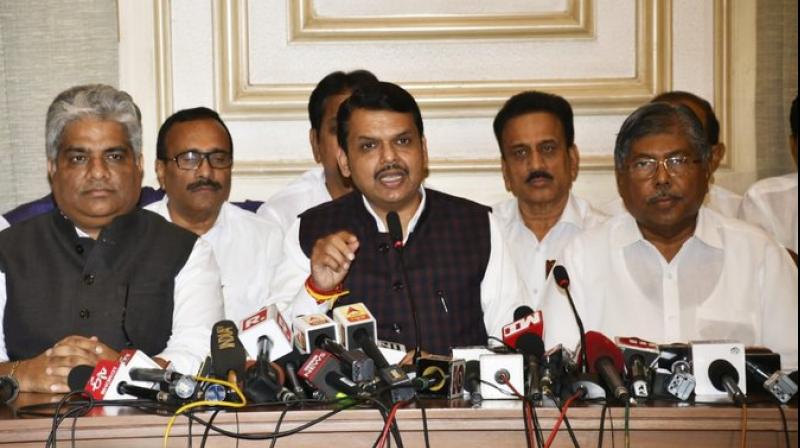 Devendra Fadnavis resigned as the chief minister of Maharashtra on Tuesday. (Photo: ANI)

We saw an interesting twist to an unambiguous people’s verdict in Maharashtra. The BJP-Shiv Sena alliance campaigning on an unabashed Hindutva platform won a clear mandate winning 160 of the 288 seats. The BJP that won 105 seats had a strike rate of over 70 per cent (105 out of 152), while the Shiv Sena had a strike rate of about 40 per cent (56 out of 124). Clearly, it was a win for the worst Hindu revanchism, for the Shiv Sena stands or, is it now stood, for everything right of the RSS. In fact, the Shiv Sena even makes or made the Bajrang Dal and VHP looks tame. Be that as may be, it was an unambiguous victory for the combined retrograde ideologies of the RSS and SS.

The people of Maharashtra had spoken and under normal circumstances their wishes should have been respected. But the election results and their performance clearly told the Shiv Sena that their time was running out. The once junior partner of the alliance — the BJP was now the engine of the right wing in Maharashtra. It could no longer be sure of its place in Maharashtra politics the next time. So it baled out of the alliance.

The pre-election alliance of the BJP and Shiv Sena won over 42 per cent of the popular vote, while the two Congresses together won only 32.6 per cent of the popular vote. If there was any morality and decency left in our politics, the rightful government in Maharashtra should have been of the two undesirables. But that was not to be. Uddhav Thackeray did an Ajit Pawar on the BJP by pulling out of the right-wing formation.

What was possible in Maharashtra went way beyond what was thinkable. The secondary theme of the BJP-led alliance was to arrest the growth of corruption in the state by promising to arrest Ajit Pawar and change his way of life in jail. The suddenly marooned BJP found a lifesaver when Ajit Pawar did an Uddhav Thackeray on the family party, the NCP. It had nothing to do with policy or political morality. It was a question of his place in the family pecking order. Like Sonny Corleone, Ajit Pawar too had a tendency towards the rash and went alone to meet his fate.

Now we have the likelihood of a Shiv Sena-led government with the two Congresses supporting it from within. The BJP may very well say it is glad to have the Shiv Sena monkey off its back. Narendra Modi once described the Shiv Sena as a hafta collection party. Now the BJP can hope to muscle into the Shiv Sena base and become the biggest hafta collecting party in India’s richest state.

But this is not a simple “art of the possible” power play. This newly-scrambled alliance of a renegade Hindutva group with two clan-led Congresses has major implications for Indian politics. Soon after the Supreme Court’s somewhat judicially dubious verdict on the King Rama birthplace in Ayodhya, many in the Congress welcomed the judgment, just as many of its leaders welcomed the scrubbing of Article 370. By deciding to remain quiet on it, the so-called liberal or centrist parties in our political firmament made their ideological choice. They all moved rightwards. Now they are allied with the ugly face of that reality. Allied with a party that viscerally hates religious, ethnic and regional minorities. So where does this leave Indian politics? Do we now have two right wing formations?

When the team led by B.R. Ambedkar wrote the Constitution, it obviously did not contemplate the capricious disregard for norms and disregard for decency and consistency inherent in our leaders. How “we” look is a no longer a concern. In the Maharashtra drama, we saw all provisions and expectations of the Constitution flouted and trampled on by all the constitutional authorities. The Maharashtra governor, Bhagat Singh Koshiyari, an RSS apparatchik, willingly allowed himself to be lied to and apparently accepted signatures by all the newly elected NCP MLAs on sheets of paper attached to Ajit Pawar’s “letter of support” to the BJPs chosen legislative party leader, Devendra Fadnavis. Common sense would have told Mr Koshiyari that while some support for Ajit Pawar was possible, all was impossible. Clearly, the governor never stopped being an RSS apparatchik and allowed that to overpower his sense of morality. Clearly, he has shown himself as not fit to hold that position. The Prime Minister used a rarely-used provision to be used during a war or financial emergency to facilitate the daybreak coup leading to Fadnavis being sworn in as chief minister.

What we have witnessed in these past weeks in Maharashtra is a complete collapse of the notion of politics being about a vision for a better future and what is best for the people. Instead, we saw a sordid drama played out in five-star hotels in Bombay, with money replacing vision and ideas.

The Pawar family schism that so impacted Maharashtra politics is yet another metaphor for the collapse of the party system in the country. From Punjab to Tamil Nadu, we now have a party system that is neither constitutional nor legal. Though the founders of this Republic never used the term “political party” even once in the Constitution, from day one we were intended to be and are a party based democracy. When people elect representatives they are in fact choosing parties.

How parties function then becomes critical to our democracy. If parties did not function or are not required to function in a prescribed constitutional and democratic manner, the leadership inevitably migrates into the hands of an elite, as we have seen in almost all our political parties now. These political parties have now factions that come together on the basis of a shared region, religion or caste, with any one of these impulses being the dominating motive for coming together. Take each of our many parties. The only party that claims a pan-Indian appeal has long ceased to be anything but an old feudal order presided over by an aristocracy. None of these parties has a formal membership, a formal
requirement for membership, forums for participation and articulating aspirations of their communities, or facilities to choose leaders by any formal process other than general and often-simulated acclaim.

We have seen the transition of democratic styles in many of the world’s established democracies. The US saw power passing from a self-nominating conventional process to a primary based system that binds the convention to the choice of individual party members. This kind of a transition did not happen in India. On the other hand, we migrated from a system where parties consisted of equals sharing a common purpose and, sometimes, goals to one where power passed into the hands of a self-perpetuating political aristocracy. Like the Gandhis, Pawars and Thackerays.