Russia and Iran now seem like the dominant regional powers, but will this survive the presidential transition in Washington? 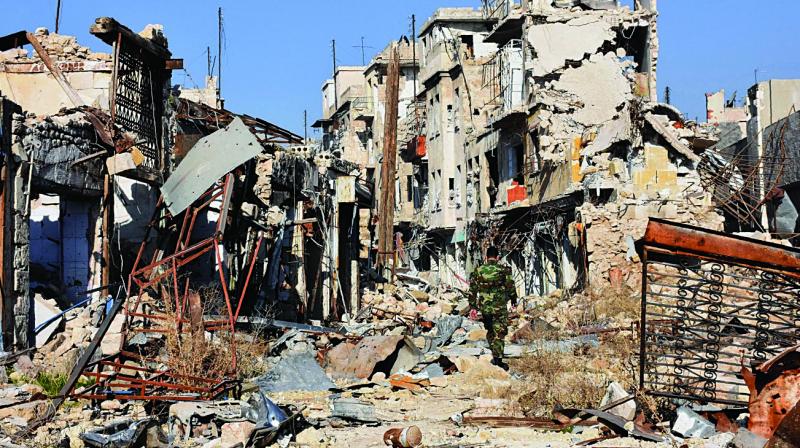 Three pictures taken in December epitomise the West Asia scenario: the crumbling edifices of Aleppo, the Iraqi armed forces poised outside Mosul, and the Russian ambassador shot dead at an art gallery in Ankara by an off-duty Turkish security official, who shouted “Aleppo”, “vengeance” and “God is great”, as he pumped bullet after bullet into the Russian diplomat.

On December 13, Aleppo, Syria’s commercial centre and home to two million people, fell to Syrian government forces, backed by massive Russian air support, after enduring a relentless siege and vicious assaults over five years. As the winter rain fell upon the besieged denizens, a resident wrote: “The sky is crying for Aleppo with soft tears”.

In Iraq, the military operation to take Mosul began in October. It is spearheaded by the elite US-trained counter-terrorism forces, and supported by the Iraqi Army, the Kurdish peshmerga, assorted Sunni militia, a few thousand US and Nato special forces and the formidable largely Shia Popular Mobilisation Units (PMU), trained by Iran. The operation began with about 30,000 troops, but the attacking coalition soon swelled to a hundred thousand, the largest force mobilised in Iraq since the US invasion in 2003. There are about 5-8000 ISIS militants in Mosul.

The troops have made quick progress so that Mosul is now besieged on all sides. The PMU have been placed in the west of the city to prevent ISIS fighters from escaping to Syria. The Kurds are in the east, alongside their own “autonomous” territories in Iraq, so that they are well-placed to stake a claim on Mosul once it has been liberated. In mid-December, the attack was halted for an “operational refit”, reflecting the tough fighting spirit of the ISIS militants and the high casualties that the Iraqis have suffered.

The fighting on the Iraqi and Syrian battlefields has been taking place amidst some significant shifts in regional political alliances. The most striking change has been in the Turkish approach to regional affairs. From 2011, Turkey had allied itself with the Gulf sheikhdoms to mobilise the Salafi militants and had even set up a “jihadi highway” to facilitate the movement of radicals into Syria.

But the success of these Islamic forces also opened opportunities for the Syrian Kurds to expand their hold over their traditional “Rojava”, their western homeland across the Turkey-Syria border. Soon, most of the border came under Kurdish control so that it was contiguous with Kurdish territories in Iraq and Turkey. As seen from Ankara, a consolidated Kurdish homeland in the heart of West Asia was imminent.

This concern has led Turkey to abandon its Gulf allies and reach out to Iran and Russia. Its military forces have entered both Iraq and Syria to control Kurdish aggrandisement. In Iraq, it has projected itself as the champion of the Turkoman community and of Sunnis in general, and has positioned itself to challenge Kurdish efforts to take Mosul and change the traditional demographic domination of Turkoman and Sunnis in the area.

In Syria, Turkish forces have broken the contiguity of the nascent “Rojava” by taking control of a 90-km front at the border and going up to 55 km into Syrian territory to set up a “buffer zone”. Turkey has now emerged as the principal partner of Russia and Iran in promoting peace in Syria, a process that at present excludes the UN, the US and all the Arab countries.

The outlook for West Asia for 2017 hardly looks promising. While the fall of Aleppo is a major blow for the rebels, the fighting is expected to go on, though it appears that the backing of Gulf sheikdoms for the rebels is now largely confined to media support.

Again, while Mosul could also fall to Iraqi troops, the future shape of Iraq will be determined by the aftermath, i.e., whether we will witness bloody sectarian revenge-killings or Iraq will be able to control its sectarian cancer and truly build an accommodative polity.

The future of the Kurds also remains uncertain: while they have taken advantage of conflicts in Iraq and Syria to bring their traditional lands under their control, they have aroused the animosity of two formidable foes — Turkey and Iran. If moderate counsels prevail, they might opt for autonomy in Iraq and Syria, but the more ambitious among them might seize the historic moment to fulfil their age-old aspirations.

Russia and Iran now seem like the dominant regional powers, but will this survive the presidential transition in Washington? The signals here are mixed: While the Trump camp has indicated a desire to work closely with Russia and to reduce backing for the Syrian rebels, it is not clear if this posture will continue in the face of the Cold War-like hostility for Russia in the Republican Party and other sections of the US political establishment.

And, then there is the visceral animosity for Iran projected across the Trump grouping, with some senior Trump appointees also having strong negative views about Saudi Arabia and Islam in general. The competition for influence among the Trump stalwarts will ensure that the US’ approach to West Asia will remain mired in harsh rhetoric and policy paralysis, with the US unlikely to offer any effective leadership in the region.

Where will this leave the ISIS? During the Mosul operation, the ISIS carried out a series of devastating attacks in Istanbul, Baghdad and different parts of Saudi Arabia. Its “lone-wolf” adherents have also been destructive in several parts of West and South Asia, and have carried out at least 20 attacks in Europe in which several hundred people have been killed.

Even if Mosul were to fall and some important ISIS leaders killed, ISIS militants are likely to go underground and perpetrate attacks against vulnerable targets, wherever they might be. West Asia’s dysfunctional and conflictual politics will also ensure a steady supply of new recruits. ISIS members will then continue to proclaim: “We remain, we expand.”

We are a successful nation, but still a work in progress