In Ireland, Pope sets Church in a new direction

Ostensibly, Pope Francis’ historic two-day visit was to attend the triennial Festival of Families in Dublin. 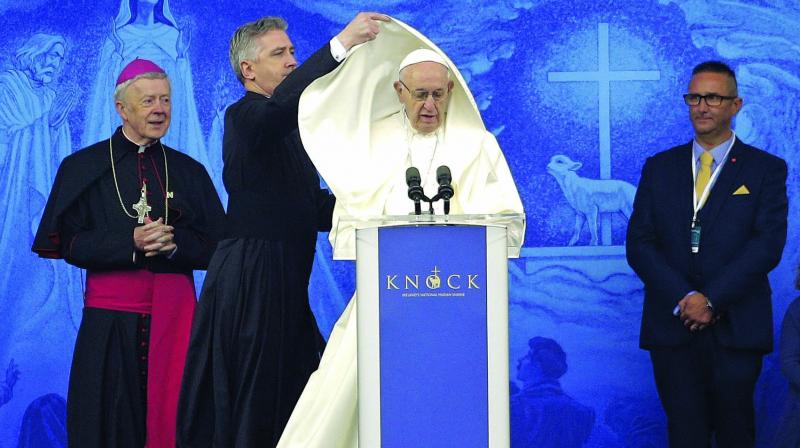 An aide adjusts Pope Francis’ cape as he speaks at the Knock Shrine in Knock, Ireland, on Sunday. Pope Francis was on a two-day visit to Ireland. (Photo: AP)

Ireland and the Vatican moved significantly closer over the weekend to forging a more rational Church-state relationship that would not only strengthen Irish secularism but also restore the confidence of many among the world’s 1.2 billion Roman Catholics.

Ostensibly, Pope Francis’ historic two-day visit was to attend the triennial Festival of Families in Dublin. But since he chose the venue, an element of long-term planning cannot be ruled out. Symbolically, the first family to tell their story to His Holiness and the gathering of nearly 43,000 people in the Croke Park Stadium was a father, mother and two children from Mumbai. Speaking of information technology and the social media, they warned to public applause of the danger of technology overwhelming family values.

That is only one challenge that faces this divided, war-torn and yet indomitable island and the modernis-ing Leo Varadkar, who became Ireland’s youngest ever Taoiseach (Prime Minister) in June 2017. To take one small example, the black humour of a play titled A Skull in Connemara that I saw in Dublin’s Olympia Theatre two days before the Pope landed showed graves being dug up and skulls and bones being merrily smashed while swipes were taken at the Catholic clergy. All that would have been unthinkable when I last sat in the slightly tired red and gold Victorian splendour of the Olympia Theatre in 1959: India’s Ram Gopal was dancing there and I, a young reporter in Newcastle upon Tyne, was handling the publicity.

Ireland has moved since then from religious conservatism to thrusting modernity.Although Mr Varadkar, who was brought up as a Roman Catholic, respectfully addressed the Pope as “Holy Father”, his welcome speech in Dublin Castle was almost a scolding. He spoke of the “shame and sorrow” of the Catholic legacy and demanded corrective action. It was a far cry from the last and first papal visit in 1979, when nearly three million  devotees che-ered Pope John Paul II as a sovereign head of state and keeper of the nation’s conscience.

Abortion, contraception, divorce and gay sex were forbidden then. No one complained of high-ranking priests sodomizing young boys or of babies being taken away from unmarried mothers and sold into adoption. No one mentioned the notorious “Magdalene Laundries”, which were supposed to rescue, support and rehabilitate fallen women but were really vicious Church-run dens where helpless women were sexually, physically and mentally exploited.

Pope Francis bravely acknowledged all these crimes. He spent 90 minutes with eight victims of sexual abuse, expressed regret and promised redress. It’s Mr Varadkar’s legitimate boast that the Church’s hand no longer lies so heavily on secular affairs.  His own life as Ireland’s first (and the world’s fourth) openly gay head of government symbolises this revolution. Ireland was the first country in Europe — probably in the world — to legalise same-sex marriage.

India can take some pride in this transformation. The Taoiseach’s father, Dr Ashok Varadkar, was a Mumbai-trained doctor who migrated to Ireland. Mr Varadkar himself, who has visited his ancestral country several times, completed his medical internship at Mumbai’s KEM Hospital. Whether or not he has a smattering of Marathi I don’t know, but his English has an Irish accent and he is fluent enough in Gaelic to make speeches in that dead but patriotically honoured language.

Mr Varadkar tried to make his reception for Pope Francis as wide-based as possible, inviting leaders of other Christian sects, members of the Council of State and European Parliament, lawyers and judges. But Arlene Foster, leader of the Democratic Unionist Party of British-held Northern Ireland, ungraciously refused his invitation, thereby drawing attention to the minority fanaticism that — shades of India – has partitioned the island.

When I interviewed the ultra-Protestant DUP’s founder, Ian Paisley, a fundamentalist firebrand preacher, during what the Irish call “the Troubles” of 1969, he informed me that India’s problems were due to “Papa” (meaning Pope Paul VI) visiting Bombay four years earlier. He called Pope John Paul II the “anti-Christ” when he addressed the European Parliament in 1988. On Sunday, Pope Francis sent his love to Northern Ireland, but it will be some time before passions have cooled sufficiently for him to take up Mr Varadkar’s suggestion and visit the British province.

There is no doubt that even in Ireland, the Pope is no longer the figure of awed veneration he once was. No more than 45,000 worshippers attended his Holy Mass at the Knock shrine where a village boy claimed to have seen an apparition of the Virgin Mary in 1879. It’s a different Ireland. Following the May referendum when 66.4 per cent of 4.8 million Irish people supported removing the ban on abortion, Mr Varadkar promised a new law by the end of the year. This will meet a demand that has been gathering strength since 2012 when a 31-year-old Indian dentist, Savita Halappanavar, died at Univer-sity Hospital in Galway  due to the complications of a septic miscarriage and the denial of her request for an abortion.

During a radio interview on January 18, 2015 (his 36th birthday), Mr Varadkar spoke publicly for the first time about being gay: “It’s not something that defines me. I’m not a half-Indian politician, or a doctor politician or a gay politician for that matter. It’s just part of who I am, it doesn’t define me, it is part of my character I suppose”. Ireland sent the Irish Brothers to run schools in India. It also sent the Loreto nuns who educated millions of Indians, including West Bengal’s Jyoti Basu. India has returned the compliment with a Prime Minister of whom the world can be proud. Leo Varadkar would be a fitting guest of honour for one of our Republic Day ceremonies.