Some lessons to draw from Maharashtra drama

A standoff between the Shiv Sena and the BJP on the issue of chief ministership had plunged the state into a political crisis. 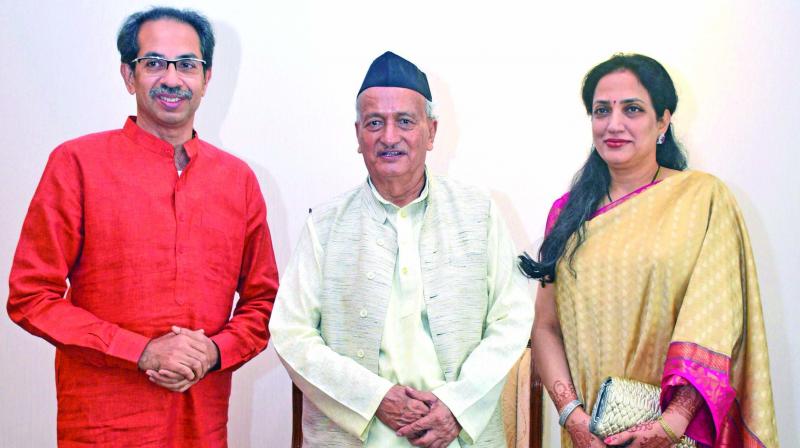 So it’s final now — the Shiv Sena-Congress-NCP coalition will form the next government in Maharashtra. This news has come more as a big relief than as excitement. A month-long uncertainty marked by intense political activity, full of twists and turns, has finally ended. Maharashtra getting its next government had assumed greater importance than what coalition or alliance formed it.

A standoff between the Shiv Sena and the BJP on the issue of chief ministership had plunged the state into a political crisis. A lot has happened between then and now, that is, between the Shiv Sena walking out of its alliance with the BJP and the former stitching an alliance with the Congress and the NCP. The brief intervening period was marked by utter confusion created by an adamant Shiv Sena, a non-committal NCP, a dithering Congress, and a nonchalant BJP.

All that is behind us now. The state is all set to get its new government. How stable will be the new government is an issue but it’s not of immediate concern. Even though the formation of the state government will take its own course, it’s time to pause, reflect, and learn some lessons from the recent political stalemate in Maharashtra. Here are some lessons that can be distilled:

No room for principles in politics: Politics is not about principles as it is made out to be — it is all about being pragmatic. Pragmatism means being flexible to the core, whereas a principled stand imparts rigidity in a context that is essentially situational. After the election results, the Shiv Sena took a principled stand in asking the BJP to honour its pre-poll promise of 50:50 sharing of power. It insisted on getting the post of chief ministership on a rotational basis which it said was the deal. It didn’t hesitate in breaking its long-standing alliance with the BJP just because it claimed to have taken a principled stand. Any political party is only as principled as its elected members are. The fact that certain parties had to keep their flock together is a clear indication of how principled those parties can be! If any party is really principled, it shouldn’t shy away from sitting in Opposition if honouring its principles so require.

As for politicians, any politician can follow any number of principles in personal life. But in professional life, even the most principled politicians respond and adjust to situations created by the reality of election results. If a political party they are affiliated to can behave opportunistically, why can’t they? As in other professions, so in politics — most politicians are opportunistic, and therefore, pliable and poachable.

Politics is all about being pragmatic, and not about principles, or egoism for that matter. And if anybody plays politics of principles or egoism, it’s mostly the general public, wanting development problems to get attended to, who end up paying the price.

Don’t punch above your weight: Strange as it may appear, some degree of fairness exists even in politics. The Shiv Sena’s demand — a party with almost half the number of elected representatives than the BJP’s — for rotational chief ministership was unreasonable to begin with, even if it was agreed upon during the pre-poll alliance. What if the Shiv Sena were to get only 25 seats and the BJP were to get 130 seats in the recent elections? Would the Shiv Sena still have held on to the pre-poll alliance promises? The fact is that in a pre-poll alliance, parties can agree on virtually anything. And those agreements can take any form, oral or written. However, those agreements have to adjust to the reality of how many seats each party ends up winning. If any party tries to cling to the promises made during a pre-poll alliance, it is on a wrong footing.

At the same time, the BJP’s offer of deputy chief ministership to the Shiv Sena was a decent one by any yardstick. By punching above its weight, the Shiv Sena played a huge gamble. The gamble may have paid off this time, but not without some costs. Who knows, the Shiv Sena may have won the battle, but lost the war!

Resist the temptation of going to the public: It’s probably not a smart strategy to announce your each and every move in public. The opponent can take advantage in devising its counter-moves. This lesson came out so clearly in Maharashtra politics this time around. The progress that non-BJP parties were making in stitching a coalition was being made public at every stage. There may be some merit in keeping the public (and the authorities!) informed about the progress. But then it gave some advantage to the BJP that resulted in its surprise “overnight coup”. Politics is all behind-the-scene activity, whether stitching a coalition or reviving an alliance. Political leaders can go in to a huddle, can do intense parleys, but need to exercise restraint in making their plans public until those are fully firmed up.

Continue reviewing your assumptions: If certain things have been true in the past, it doesn’t mean that they will hold true in the future too. Circumstances change and so do relationships. Political parties are known to abandon old relationships with the same alacrity as they forge new relationships. Constantly evolving circumstances need to be assessed continuously. The BJP probably assumed that the Shiv Sena and the Congress would never come together because of their ideological differences. But here they are, forming a coalition and willing to work together.

Refrain from blame games: Blame games are not only unhelpful but they can also put a person in a tight spot. Placing the entire blame of any adverse circumstance on somebody else may be convenient but it’s dishonest if one has also contributed to it. For example, the Shiv Sena squarely blamed the BJP for breaking their alliance when the Shiv Sena itself was in part responsible for it. Politics is unpredictable. One never knows when one may have to shake hands with one’s adversaries.

It’s true that politicians tend to forget and forgive sooner than others. But anything negative that is more recent tends to stick in their heads. People often take umbrage and may forego associating with you for saying something negative. Therefore, one needs to be careful of indulging in blame games, for one never knows when it can boomerang.

Time is of the essence: When the time is to act, don’t talk. If one doesn’t act fast enough to seize an opportunity, one loses it. First-mover advantage exists in politics too. In stitching a grand coalition, the non-BJP parties probably took too long and risked losing out.

These are then some of the key lessons to learn from a month-long power tussle in Maharashtra. One hopes that political leaders will pay heed to it as more states go to the polls in the coming months.