he Syrians and Iraqis fled from the ruins of internecine war. 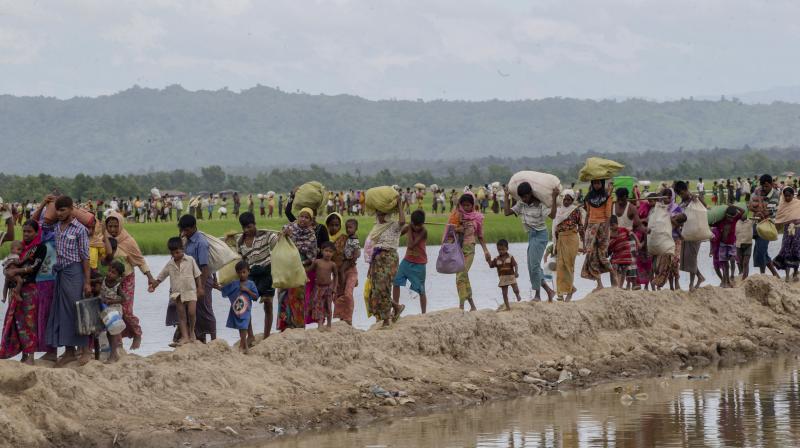 The Rohingyas of Burma fled from genocidal persecution at the hands of the supposedly compassionate Buddhist nation. (Photo: AP)

“Doubt grew from a seed
And flourished in stems and leaves
Nourished by fantasy’s need
Even doubting that doubt deceives.

In the present Christmas season, I meet a Parsi couple whom I haven’t seen for years. We exchange the conventional catch-up queries leading to my asking, “I heard you’d gone back to Pakistan?”

“We did for a few weeks, but came back. There are no relatives left there,” the lady friend said.

“Death or immigration?” I asked.

“Both,” she said. “They’ve all left.” By “all” I deduced she meant Parsis and I was right, because she went on to say, “There are only about 900 Parsis left in Pakistan.”

“So, where have they gone?”

“Running away from religious persecution?” I asked.

“Don’t be silly, when were Parsis ever persecuted for their religion?”

I was about to remind her that after the Arab invasion of Persia in the 640s and the defeat of the Sassanian Yazdegerd III by the Muslims, there was a lot of it about. But I didn’t. The ones who moved to Mumbai weren’t then “refugees” of any sort.

The Parsis of the subcontinent, very much citizens of our great, secular Mother India, are of course descendants of the refugee Zoroastrians who fled Persia after the Arab occupation, decades or even hundreds of years later.

They landed in Sanjan, Gujarat, and were given shelter by the local ruler Jadi Rana who was determined to follow the great tenets of the Hindu religion that preached compassion to those in need of it. Perhaps he was also confident that they would be an asset to his territories.

The last year, and the few before it, have seen vast migrations of people from parts of the world in which they faced persecution — political, religious or purely the persecution of poverty. They attempted, sometimes tragically and fatally, to move to where they felt safer or where they could find work or make a better life for themselves.

The Rohingyas of Burma fled from genocidal persecution at the hands of the supposedly compassionate Buddhist nation. The Syrians and Iraqis fled from the ruins of internecine war. Africans, by the unsafe over-crowded boatloads, attempted to cross the Mediterranean and seek refuge in Europe.

This attempted transmigration of people on a large scale has shaped the politics of the last few decades. Donald Trump made much in his election campaign of keeping the Mexicans out of the United States by building his wall. Angela Merkel compassionately admitted Syrian, Afghan and other refugees and suffered a public, and later electoral, blow to her popularity in Germany. In France, Italy and Greece, countries immediately affected by the attempted migration of refugees channeled through Africa, saw campaigns and gains from parties whose main political plank was opposition to immigrants.

In Hungary, Viktor Orban’s democratically elected right-wing government shut its door to all immigration and even banned its singers from entering the Eurovision Song Contest on the grounds that the contest was “too gay”. That has, gentle reader, nothing directly to do with the ban on immigration, but does illustrate the backward disposition of the population that opposes it. Hungary has, as a consequence, suffered the opprobrium of liberal Europe and Mr Orban has been compared to the nastiest people of the 20th century. He probably doesn’t care one bit, but the international image of the country has certainly been darkened and damaged.

Every country and government that attempts to extend a compassionate hand to refugees who have suffered religious or other persecution in neighbouring countries must win approval. The Indian government of Narendra Modiji has passed the bill amending the Citizenship Act. The world now knows that the amendment has extended citizenship to minorities who have fled from the neighbouring countries of Pakistan, Bangladesh and Afghanistan. So far immediate beneficiaries of the bill, according to India’s Intelligence Bureau, will be 31,313 refugees — 25,447 Hindus, 5,807 Sikhs, 55 Christians, two Buddhists and two Parsis. I have no idea, gentle reader who my two co-religionists are and what they are seeking refuge from, but am sure their demands are legitimate and welcome their swelling the figures of the Zoroastrian population of India. Every little helps.

The flaw in this balm of governmental generosity is, as thousands of commentators have already said, that this amendment is the first time that access to citizenship has been subject to religious distinction. This is a very slippery slope and those who defend the amendment, such as the distinguished attorney Harish Salve, should consider this thin end of a rather larger wedge creeping into India’s constitutional secularity.

And even being subject to such distinction, it doesn’t take into account that in Pakistan, for example, there are Hazaras and Ahmadis who regard themselves as Muslims, but have in law been deprived of such religious status. This deprivation has led, in Pakistan, to assaults on both these communities. Pakistan and other nations who regard themselves as “Islamic” in our wide world, have populations which are in very many cases militantly divided into Shias and Sunnis, with one denomination regarding the other as heretics.

This doesn’t remain in the realm of theo-historical debate but becomes a matter of serious political concern when, for instance 80 Shias are killed in a bomb attack in February 2017 on the shrine of Shahbaz Qualandar in Sehwan, Sindh. If this results in some Shias fleeing Sindh, as their Hindu fellow-countrymen did in 1947, should they not be regarded as in need of the dharma-led compassion that has been shown to the 31,313?

According to Hindu scriptures, Lord Vishnu, the retainer, with his supreme virtue of compassion, interfered in human affairs to restore the imbalances that have crept into the world through human folly.