Opinion   Oped  29 Apr 2020  The shutdown is a device to shut out the Dalits
Opinion, Oped

The shutdown is a device to shut out the Dalits 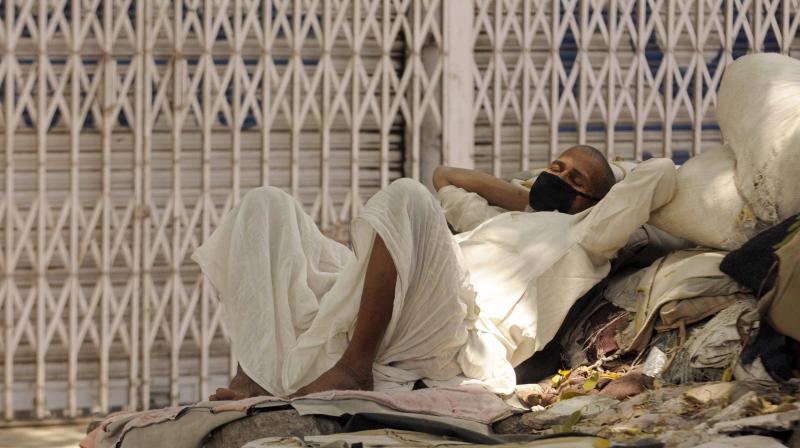 A worker cover his face with a mask as he takes a nap outside a closed shop in a market in New Delhi. Thousands of workers in major Indian cities have lost their jobs due to the shutdown imposed to stop the spread of the coronavirus. (DC Photo; Pritam Bandyopadhyay)Photograph......Pritam Bandyopadhyay

In every crisis, what resurfaces in India is caste. Seven decades into what can only be described as paradoxical modernity, India keeps its baggage of caste and feudalism intact. Every challenge faced by the country originates from the deeply ingrained system of caste.

The Covid-19 shutdown posed just such a challenge, and India's response to it was, as usual, conditioned by caste. Before unleashing the lockdown on the people, the basic needs of vulnerable groups, such as transport for workers wanting to go home, were not prioritised or even addressed. The middle classes in contrast were enthusiastic about staying within the confines of their home, finding time to update their social media profiles with 'I Stay at Home' messages. Unlike the servant class, the only difficulty these middle classes might have faced during this shutdown is the juggling of housework and ‘work from home’.

The middle class thinks of itself as a secular economic class; but it is in fact a caste category. In my urban middle class neighborhood, I have often observed women casually making remarks against the 'meritless' Dalits, fully confident that no one from that social group would be within earshot. Caste groups like Reddy men and women openly proclaim their caste background. The urban middle class are nothing but a set of dominant castes masquerading as an economic class.

The most vulnerable groups in the lower strata of society are the Dalits and OBCs who earn meagre wages that hardly ensure them two square meals a day. Now with this shutdown, their survival lies at the mercy of philanthropic savarna social workers or the state.

The plight of migrant workers thrown out of livelihoods is a major challenge posed to the state during this shutdown, which was done without any prior intimation or any necessary arrangements being made. No apologies can bring back the lives of the people who died trying to travel on foot to their home towns and villages. Their number matches the fatalities due to Covid-19 itself. Again, most of these migrant workers are Dalits who migrated from villages and drought-prone areas to the cities. The very fact that these migrant workers opted to walk home without bothering to know where their food and water during the journey would come from is a telling comment on the prospects they face if stayed behind without work in the cities.

Transcommunities on the other hand face a different challenge of inaccessibility of food and rations due to social stigma. Police violence during the shutdown is another challenge that transwomen face. They have no access medical care due to the stigma attached to them as sex workers or carriers of STDs.

Communities that are criminalised or those that face extreme levels of violence from the state, namely women sex workers, transwomen who depend on sex work or begging, have been pushed further to the margins by this shutdown. Most of them have never accessed rations from the government. They fear adverse consequences if they register their identities. While these criminalized communities do not possess ration cards or Aadhaar cards due to perpetual police violence, recent developments such as the Citizenship Amendment Act (CAA), the National Register of Citizens (NRC) and the National Population Register (NPR) have exacerbated their conditions.

Domestic servants are distressed that they may not be paid their monthly salaries during the shutdown. Middle class women who are struggling with household chores might now be understanding the pain of domestic labour. But they still haggle over the monthly salary they pay to domestic because women do not consider domestic labour, which they themselves perform, as a contribution to the family economy. For middle class women, family is the significant unit and they do not see themselves or their labour or money or property separate from it. They do not demand a salary for their own labour because ultimately the money remains within the family even if it is not specially allocated to them as wives and mothers.

The plight of scavengers is another story in itself. They are still working with bare hands during the Covid-19 shutdown. Manual scavenging is an onslaught on vulnerable sections by Indian society. Indian society is never committed to eradicating manual scavenging as caste is a way of life here. The essential service of cleaning the gutters and clearance of garbage are continuously performed by Dalits during shutdowns, compromising their right to life and safety.

There are people who believe that Covid-19 is god’s or nature’s way of teaching a lesson to humankind. However, the Covid-19 shutdown is proving something drastically different. In this shutdown, the privileged continued to be privileged. While the dominant castes have the privilege to “work from home” and stay safe, the workers are struggling for food and basic amenities. Dalits, manual scavengers, migrant workers, sex workers, transwomen, the lower-classes, wage workers, housemaids, vendors have been the vulnerable sections in the Covid-19 shutdown as they have been in other crises too. Are these categories mutually exclusive? The answer is both yes and no. Most of the transwomen are migrant workers but the state doesn’t consider them as labourers as they live by sex work or begging and the state refuses to see sex work as labour.

Similarly, scavengers, migrant workers, housemaids, wage workers, vendors are all Dalits and lower castes. They are not exclusive categories but different forms of caste in India. As long as India is not committed to eradicating caste, class differences cannot be effaced. In the time of Covid-19 or in normal times, the inhuman condition of the Dalits remains the same.