India is ‘drunk’ on Mahua: A political star is born

The political nuance of “Vande Mataram” was not missed by political watchers, who read much more than a routine oath into their words. 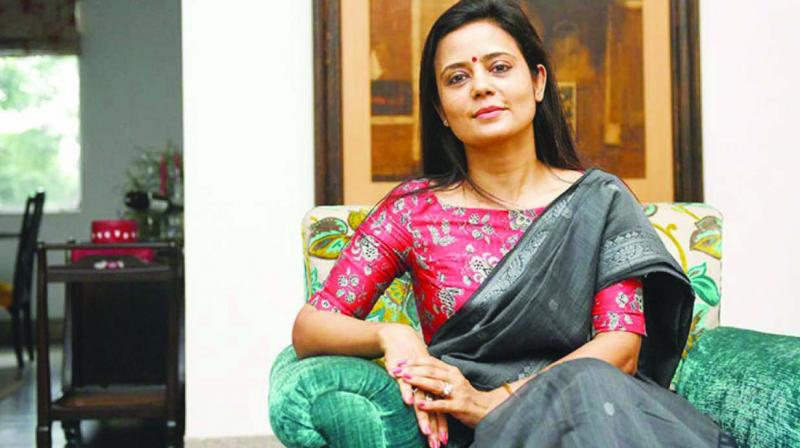 Political meteors flash across our mental screens a bit too rarely. But that’s precisely why they get noticed. The 44-year-old, newly-minted MP from Krishnanagar, West Bengal, achieved overnight stardom this week when she delivered a scintillating maiden speech in Parliament. Within minutes, #MahuaMoitra was trending, and social chatter across platforms was dominated by videos of the “instant” celebrity — Mahua Moitra. It was hailed by fans as “the speech of the year”. Mamata Banerjee had shrewdly fielded astonishingly attractive female candidates in the 2019 election. At the moment, three of them are hogging the limelight each time they show up to attend a session, clad in couture, or handpicked stylish sarees and looking like a million bucks as they twirl and pose for the cameras, like seasoned performers on the red carpet. Even the oath-taking ceremonies of Nusrat Jehan and Mimi Chakraborty were perfectly choreographed, down to the last detail. The political nuance of “Vande Mataram” was not missed by political watchers, who read much more than a routine oath into their words.

The most fascinating reality show in India right now is the one taking place in Parliament. The star cast is formidable and visually impressive. The dialogues being spouted seem cleverly scripted and are being delivered with admirable finesse. Ms Moitra’s articulate and fiery delivery was lauded across the board — even by virulent critics of her political boss lady — Ms Mamata Banerjee. Interestingly enough, Ms Moitra’s political foray, began with Rahul Gandhi back in 2008. It was a shortlived stint as a Youth Congress leader. Her public profile took on interesting hues in 2017, when BJP minister Babul Supriyo “insulted” her during a television debate, and Ms Moitra slapped him with a defamation suit. That’s the power of television and the ability of an individual to know how to leverage it. Successful reality shows follow a format, and the winning formula has been tried and tested over decades. Aggression combined with sex appeal works best. Players need to understand the medium in order to dominate ratings.
Today’s young and gorgeous parliamentarians have mastered the art of playing to the gallery. They are aware and self-assured in front of the cameras. They come prepped for a shoot, just like television and film actors do. They know their lines, and most importantly, they know their audience — the millions out there who are watching and judging them. Constant scrutiny does not make this breed uncomfortable. On the contrary, our star parliamentarians thrive on the lavish attention. Photo-ops and how to milk them comes naturally to this lot. Being media-savvy definitely helps when it comes to positioning and pushing ahead in a highly competitive field.

Ms Moitra, who had earlier gained notoriety when she slapped a police officer at Silchar airport, has demonstrated her gutsiness many times over since then. Coming as she does from an affluent family, Ms Moitra was born into privilege. When she decided to walk away from a cushy London job at JP Morgan and plunge into politics, it was a clearly thought through and a very bold decision. She stated that she wasn’t interested in becoming one more “managing director” from her batch of high achievers. She came back to Kolkata — and as they say, the rest is history.

Defeating the BJP’s Kalyan Chaubey by a hefty margin of 65,404 votes in this election is just the start of what promises to be an action-packed political career, with Ms Moitra focusing her energies on education and women’s issues. This has been a consistent commitment, from what one understands, going by her extensive and articulate campaign speeches over the years. Going through available material on her, one learns she is a “yoga freak”. A gushing entry on a Web portal helpfully attributes her listed vital statistics (32-24-34) — all thanks to yoga! Without a trace of awkwardness or embarrassment, there are other direct references to her physical appearance. She is described as “one of the most beautiful women politicians”. Another one laments that not much is known about her personal life or relationship status, even though she “lives alone” in Kolkata.

Ah well… the lives of females in the public arena invariably generate an enormous amount of puerile interest, not just in India, but across the world. The downside is that these vicarious thrills frequently cross the line and degenerate into sexist, obnoxious name-calling. That’s when things turn counter productive and ugly — as it happened when Mr Babul Supriyo made that cheap jibe (“Mahua is drunk on Mahua”) on national television. The upside to this form of objectionable and misogynistic behaviour is that today’s feisty female parliamentarians are more than a match for their male detractors. Ms Moitra proved that during her fiery maiden speech when she took on Prime Minister Narendra Modi, no less. Her boldness in naming the man nobody wants to offend stunned India and has earned her a place in parliamentary history. By going where few have dared to venture, Ms Moitra demonstrated the true meaning of free speech in a democracy. By candidly pointing out the malaise crippling India (“the government and religion are now intertwined”), she spoke for millions of citizens. Her comments on “rising fascism” and the “disdain for human rights” struck responsive chords even as she expertly shut down “professional hecklers” from interrupting her. This is what is meant by having a strong Opposition in Parliament. We need emphatic voices to deliver the counter narrative. We need more credible MPs willing to speak up and be heard, no matter what. The irony is not lost on anyone — here is a Rahul Gandhi protégé, doing his job for him, years after they parted ways, while Mr Gandhi wastes his time in Parliament scrolling messages on his mobile phone! Let the poor man go — it’s cringe-inducing to watch Congress stalwarts begging their boss to stay on, while Reluctant Rahul stubbornly refuses to oblige. Grow up, guys. Remember, reality television is very cruel indeed. As in life, so in Parliament — there are no second chances.