Mutilation of J&K: A year of unwinning Kashmir

One year since the abrogation of Article 370 and sundering of the state, Kashmir remains deep in mourning 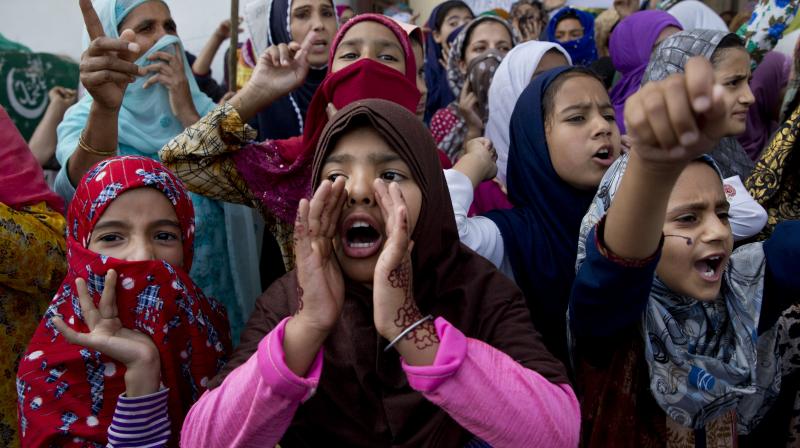 Critics say that on August 5 last year, the government ventured on the path of disowning and un-winning Kashmir. PTI Photo

Srinagar: Nearly a year since the dismembering and disempowering of Jammu & Kashmir, the mainstream political parties have been reduced to a state of limbo.

Though most of the leaders who were taken into preventive custody around August 5, 2019 and subsequently detained formally under the Public Safety Act (PSA) have now been freed, many of them are under duress not to speak up.

On the whole, political activities by mainstream parties--excluding the BJP--have come to a complete halt.

Only a couple of key faces of J&K politics are active on Twitter but even there they behave like ‘obedient children’, as described by a critic.

The leaders themselves blame the central government and its local facilitators for their waning influence and the disarray in their parties. They say the government has through its harsh steps left no political space for them.

They insist that the imposition of a vacuum in J&K politics is a calculated stratagem of the BJP.

“By pulverising the democratic space and criminalising dissent, they are brazenly taking pride in destroying every institution of democracy to further their fascist agenda,” said a senior leader of the PDP.

That coming from a former coalition partner of the saffron party in the J&K government may be pooh-poohed by many as tongue-in-cheek, but there is no denying the fact that arbitrary incarceration of leaders of every hue after the abrogation of Article 370 and splitting the state up into two Union Territories definitely contributed to a stifling of J&K’s political parties.

Yet amidst all this, a deliberate attempt is being made to carve out some political space for select people and parties that are willing to toe the line of the dispensation at the Centre.

Some local political observers say this policy of ‘containment’ to keep political parties other than the BJP and its myrmidon away from the people does not augur well for India’s interests in Jamu & Kashmir, notwithstanding the Narendra Modi government’s claims to the contrary.

Senior PDP leader Naeem Akhtar lamented, “Delhi has decimated decades of our investment in peace and democracy. At the cost of mere political gains for one party, all norms of democratic society have been infringed upon.”

Critics say that on August 5 last year, the government ventured on the path of disowning and un-winning Kashmir.

“By seeing Kashmir through a religious and civilisational prism they want to win Hindus voters in the rest of the country by disowning and fighting people of J&K,” one of them alleged.

Srinagar resident Abdul Majeed Shah bemoaned, “The die has been cast, the script is clear. Delhi wants to infuse a sense of fear in and defeat every Kashmiri.”

Naeem Akhtar admitted that the mainstream is in total disarray and shock, and Kashmir is still in mourning. “For many of us it’s a long fight for survival and dignity in a newly demonetised democracy,” he said.