Opinion   Oped  29 Sep 2019  ‘Hindutva is inclusivity. Whatever is different, we try to understand it’
Opinion, Oped

‘Hindutva is inclusivity. Whatever is different, we try to understand it’

Together with people, we are trying to build a society having a strong character, says Sunil. 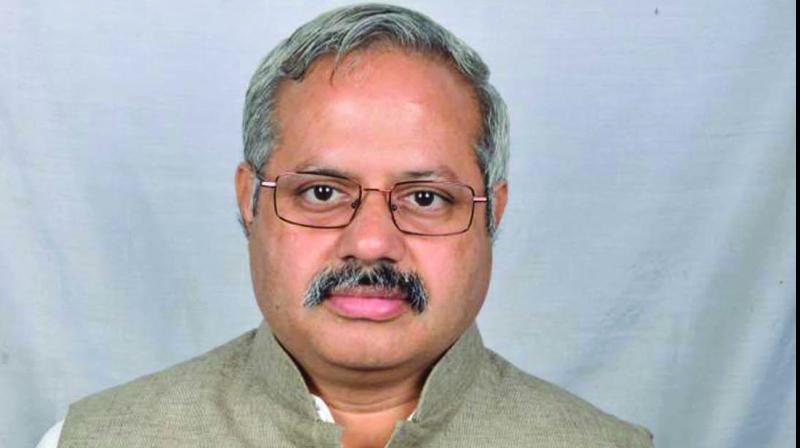 Sunil Ambekar, a senior pracharak of the Rashtriya Swayamsevak Sangh (RSS) and the national organising secretary of the Sangh’s youth wing, the Akhil Bharatiya Vidyarthi Parishad (ABVP), talks with YOJNA GUSAI about his forthcoming book The RSS: Roadmaps For the 21st Century which will be released by RSS chief Mohan Bhagwat. The book, he says, gives an insight into the working of the organisation, its stand on certain issues, its roadmap for the future and what the RSS means when it says “Hindu Rashtra”.

What was the need to come out with this book?
The book has highlighted the RSS’ work done in the past, present and its vision for the future. The RSS is a social organisation and has been working diligently to unite society and prepare it for nation building. India has a great heritage and culture, but we still have developed some weaknesses, some bad practices, like corruption. As a social organisation, we are working in various fields, taking up various social causes and with the help of people we are trying to weed out these bad practices. Together with people, we are trying to build a society having a strong character. All this is highlighted in this book.

You have said the RSS is a social organisation but why is it that some people are apprehensive about the work it does?
The RSS is a common man’s organisation and is well accepted at the ground level. Those who criticise us or are apprehensive about us actually do not know anything about us or they pretend to know about us. The reason for this might be political or some vested interest or simply that they want to remain in denial mode. Some are also influenced by Western ideas and have no introduction to Bharatiya ideas, so they tend to misunderstand us, but these kinds of people are very less in number. As I said before, the RSS is a common man’s organisation and people relate to us because of the work we do and by our behaviour. A few people might criticise us but most of them know that the RSS is their organisation, working with them, whose volunteers are locals from their own society, who help everyone, no matter what the religion, caste or creed. The reason why the RSS is growing and is well accepted is that people do not go by rumours or criticism against us. People know that the RSS is always serving, always helpful, and this is the reason why people join us and work along with us.

Some people claim that there is a difference between Hinduism, which they say is an “encompassing religion” and “Hindutva”, which the RSS promotes.
Definitely there is a difference, because Hindutva and Hinduism: “Hindutva” is Hinduness, which is a way of life. But wherever an “ism” comes, it means one cannot go beyond that and one has to go by the framework of that “ism”. As a Hindu and as a tradition of this country, we do not believe in any sort of “ism”, you cannot bind anyone — our practices are very open and we celebrate diversity. Hindutva or Hinduness is basically inclusivity. Whatever is different, we try to understand it and try to find ways and means to collaborate with it, this is Hinduness. The Sangh practices Hindutva or Hinduness, not Hinduism itself.

Often the RSS is criticised over its “non-participation” in the freedom struggle. Has your book clarified on this issue too?
Our founding Sarsanghachalak Dr K.B. Hedgewar had endorsed all political activities during the freedom movement and as a swayamsevak, he participated in all such movements under the leadership of Mahatma Gandhi. He even went to jail. Before Independence, there were political movements for Independence, not political parties, and the then Congress was a movement, not a political outfit, which included everything, including the RSS. If someone really wants to know what the RSS and others did, it should be done after Independence, to know who are the saviours of democracy, and who had put democracy under threat by imposing the Emergency?

Your book also has chapters on the Ram Mandir, Article 370, the third gender and the sexual orientations of people.
Yes, the book mentions why and how the mandir issue was endorsed by the RSS. We support the mandir because it is our cultural identity, is associated with Lord Ram, is a symbol of that identity and that is his birthplace. However, any decision on the issue will be taken by the rule of law — either through Parliament or the courts — it will be through a constitutional process.

The government has already abrogated Article 370. The book mentions the RSS’ positions on transgenders and sexual orientation. Everyone has a place in society and every human being should be treated as equal. The RSS has never endorsed gay marriages or live-in relationships and traditionally our society also does not agree with it. We have already clarified our position that homosexuality should not be considered a criminal offence as long as it does not affect the lives of others in society as sexual preferences are private matters.

Despite Mr Bhagwat clarifying the RSS’ stand on the caste and reservation issue, why is it that the RSS and its leaders have to face criticism on this issue?
There are some people who pursue caste politics while the RSS wants to unite society. These people are always afraid of losing their votebank if people get united and caste barriers are removed. Instead of uniting society, they pursue short-cut politics for gain. But the fact is that anyone who works for society, serves society without any political considerations, people will vote for him/her. These people also criticise the RSS as they have realised that the RSS has its own mechanisms to reach out to people and that the RSS is well accepted in society.

Some also claim that the RSS’ ideology is “Hindu supremacy”.
First of all, I want to ask these people what the word “Hindu” means? The word means a cultural manifestation of oneness, whether it is a Muslim or a Christian, the word “Hindu” means a unifying factor, a national identity. While others try to find out differences between different faiths and religions, the RSS looks at common factors among all. And what is common between us? We have common ancestors, we have a common history. This is what being a “Hindu” means — it’s the “Hinduness”. Those who make such allegations are those who have deliberately caused themselves a loss of memory on this issue or have had a memory loss. No matter what your faith is, the aim of Hinduness is Vasudhaiva Kutumbakam (the world is one family). The RSS pursues this and only this.

Recently, Jadhavpur University was in the news for the way some of its students behaved with a Union minister and the ABVP had staged massive protests over the incident. What do you have to say?
Like I said before, this is the difference between Hinduness and someone who follows some kind of “ism” (Leftism, for example). Anyone who follows any kind of “ism” cannot tolerate others. In any university or college, which is the bastion of any “ism”, you will find these kinds of things happening, even in some states like Kerala or the new avatar of this “ism”, the TMC in West Bengal. Our karyakartas are being killed, even other party workers. In Jadhavpur University, they talk about freedom of expression and tolerance but it is only in their slogans. When it comes to other ideologies, these very people who shout about freedom of expression become intolerant. People can have different views, different opinions, different ideas on an issue but you cannot force them on others. Wherever the ABVP is strong, other ideologies also prosper, they raise their voices, their ideas, but you will not find it in institutions where an “ism” is the ideology.

The Jawaharlal Nehru University Students’ Union (JNUSU) was again captured by the Left.
There are more than 900 universities in this country and the Left is now left with very few. The reason is that the students are rejecting their ideology. It’s just a matter of a few years that Jawaharlal Nehru University will be called a Left bastion — they might be present there physically, but the ideology is losing in there.