The NRC puts the onus of proving one’s citizenship on the citizen. 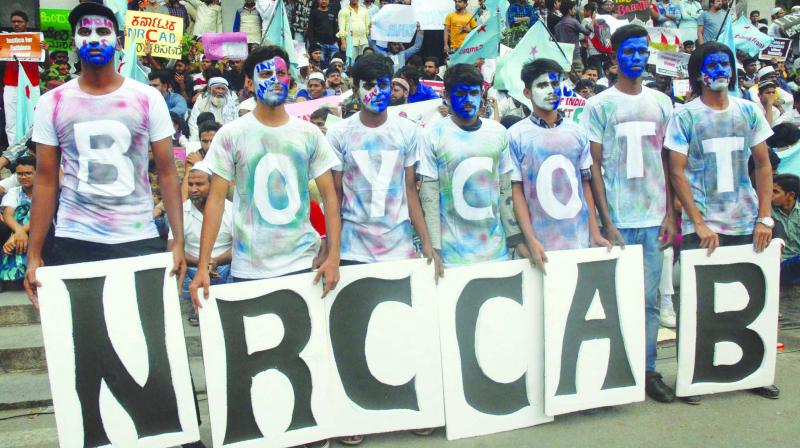 Campus Front of India activists stage a protest at Town Hall in Bengaluru on Saturday against the Citizenship Amendment Bill (CAB) (Photo: KPN)

As the protests against the CAA-NRC combine continue, certain things need to be clarified, and the record set straight. This is essential since there is a great deal of organised propaganda and disinformation afoot, with the specific aim of using these protests for partisan political gain. The propaganda machine is stronger than the ability to project the truth. Hence, it is important to use every forum to put across the opposite point of view, so that people are not misled and are able to take the right perspective as events unfold.

Firstly, this is not a Hindu versus Muslim scenario. It is true that Muslims are protesting in large numbers because they are first in the firing line of the CAA-NRC onslaught. But Hindus too are out on the streets, for two principal reasons. The NRC puts the onus of proving one’s citizenship on the citizen. This is a highly oppressive burden. As the flawed exercise of the NRC in Assam showed, both Hindus and Muslims become victims. Out of a total number of some 1.9 million people who could not make it to the Register in Assam, the overwhelming bulk were Hindus, outnumbering Muslims by a ratio of 2 to 1.

Besides, the burden of producing the right documentation and other collateral details to prove your citizenship falls disproportionately on the poor, the marginalised and the vulnerable, especially women. Both Hindus and Muslims belong to this section. The CAA-NRC combo is a scheme designed to harass the common man as against the more privileged person. The vast majority of the citizens of India will thus be affected by its operation. The degree of this harassment overarches religious divisions. Anyone poor — and we still have the largest number of the abjectly poor in the world — will face great hardship.

Most importantly, both Hindus and Muslims have finally understood that the real purpose behind the CAA-NRC combo is to divide society on communal lines. The CAA discriminates on religious lines in the granting of citizenship, excluding Muslims, which is against the express provisions of the Constitution. The NRC will ghettoise Muslims who can’t prove their citizenship in detention centres, but allow Hindus to avail of the amnesty provided by the CAA. However — to the great surprise of the planners of the diabolical CAA-NRC initiative — a large number of both Hindus and Muslims are saying that we have had enough of this divide and rule game. Citizens across religious divides are saying that we do not want endemic societal strife, turmoil, turbulence, discord and acrimony. They want to get on with their lives and avail of the secular dividends of progress, peace and harmony, roads, water, electricity, hospitals, jobs and roti, kapda  and makaan. They want the government to focus on the real priorities, the severely ailing economy, the rampant agrarian distress, rising prices and the appalling lack of jobs. To be sure, the ruling dispensation would be more than happy if the protests against the CAA-NRC become a Hindu versus Muslim affair. PM Narendra Modi himself made the highly condemnable statement about identifying protesters by the kind of clothes they are wearing. But more citizens than ever before are contesting this pernicious stereotype. They are saying we are Indians first, not religious puppets willing to dance to the cynical twitch of the master puppeteer.

Secondly, it is a deliberate distortion to say that all the protests have been violent. Students have peacefully lit candles in protest. They have taken out silent marches. They have gathered to read the Preamble of the Constitution at India Gate in New Delhi. In Mumbai, thousands have protested peacefully. We have seen scenes where in a poignant display of Gandhigiri, students have presented roses to policemen. If there has been some violence, it is condemnable. No one has the right to take the law in their own hands, or to vandalise public or private property. But to say that all the students have done that is a blatant lie. It is wrong to conflate protest with anarchy, and the youth with miscreants. An attempt is being made to demean and devalue students by falsely projecting them as cannon-fodder in the hands of criminals, as though they are incapable of independent thinking or application of mind.

It is shocking that the BJP has ranged itself entirely on the side of the law enforcing authorities. As an established political party, it has itself been in the forefront of large-scale political protests. For it to now argue that all such protests are examples of arson and lawlessness reflects very poorly on its own credentials as a political party. Moreover, while we should give due respect where due to the police, surely no one can shut their eyes to the scale of excessive force used by it in the recent protests. In Jamia — to quote only one instance — the police entered the university without permission, barged into the library, entered hostel rooms, and beat up women even in toilets. In UP, the death toll of those who have died in police firing is in double digits. CM Yogi Adityanath, who built his political career spouting venom against Muslims, has a lot to answer for. It is deeply regrettable too that Army Chief Gen. Bipin Rawat has now forgotten the apolitical nature of the great institution he heads, and made a deeply partisan comment in the matter.

When the country is in turmoil, fact and fiction get blurred. A lie is peddled as the truth, and the truth is dismissed as a lie. It is the duty of every vigilant citizen to recognise what is factual, and what is the truth. Satyameva Jayate.