We have an excellent disaster preparedness machinery. But it's time to have a disease preparedness system as well. 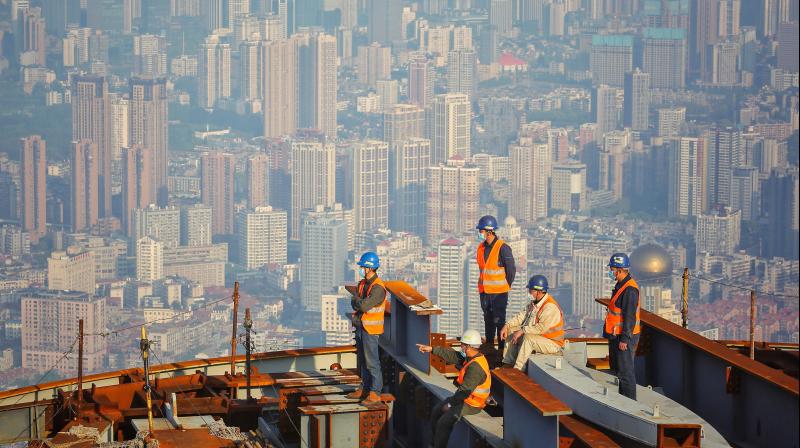 Employees are back at work at the construction site of the Wuhan Greenland Center, a 636-m high skyscraper in Wuhan in China's central Hubei province. (AFP)

China’s approach to containing the spread of the coronavirus has been called many things, many contradictory things. Just for instance, the strict lockdown and aggressive social distancing measures have been termed draconian; at the same time, the measures adopted in Wuhan, which were nothing but lockdown and social distancing, have been called effective as well. So when we in India look at how China wrested control over the coronavirus outbreak, we do so in part admiration at Beijing’s ruthless efficiency, and part alarm at the disregard for citizen liberties.

While ideological differences over civil liberties will always separate India and China, New Delhi would do well to look hard at the measures enforced by Beijing to haul the country back from the brink. As India enters into a key phase of its own battle against the novel coronavirus nCoV19, it would benefit immensely from the insights available from the Chinese experience.

The most important of such insights would be that China did not win its battle with one fell blow. If one became aware of the coronavirus outbreak only when China employed all its state power to quarantine Wuhan and no less than 12 neighbouring cities, one might be misled into believing that one sledgehammer blow was all that it took to gain an upper hand on the epidemic. In fact, China did not use one single measure or policy: it adopted multifaceted and calibrated containment tactics based on an epidemic combat strategy finessed over 15 years.

Here are three things that China did that we can learn from as we go into the most crucial phase of the coronavirus epidemic in India.

In China, measures to detect vicious outbreaks such as Covid-19 were put in place right after the SARS outbreak in 2003. A national system of reporting infectious diseases was initiated as early as 2004. Called the Nationwide Notifiable Infectious Diseases Reporting Information System (NIDRIS), it is a web-based system for health facilities to report, in real time, individual case information of 39 notifiable infectious diseases. The NIDRIS system tracks approximately 5 million cases each year. The database connects hospitals and clinics at the prefecture, county, provincial and national levels, allowing the China Centre for Disease Control (CDC) to monitor an outbreak at every level.

Besides incidence reporting, China's surveillance infrastructure includes an early warning system to detect the unusual occurrence of 33 infectious diseases. Set up by the WHO and China CDC in 2008, the China Infectious Disease Automated-alert and Response System (CIDARS) facilitates the transmission of surveillance data in real time or on a daily basis. The 33 diseases in CIDARS are classified as Type 1 (high severity but low incidence) or Type 2 (common infectious diseases). CIDARS tracks diseases that are outbreak-prone and transmits information about any abnormal signals to the CDCs at the county level through SMS. The system consists of four components: aberration detection, signal generation, signal dissemination and signal response information feedback.

How does this system work? Since lower respiratory infections including pneumonia are one of the main causes of death worldwide, all Chinese healthcare facilities are required to report any patient who has a clinical diagnosis of pneumonia of unknown etiology and meets the following criteria: fever >= 38 degrees C; radiological characteristics of pneumonia; normal or reduced leucocyte count or low lymphocyte count; no improvement/worsening of patient's condition for first 3-5 days; and the pneumonia cannot be attributed to alternative laboratory or clinical diagnosis.

After a case is registered in NIDRIS, the data can be further analysed in CIDARS as a Type 1 disease. Early alert signals are sent out when the number of cases exceeds the threshold for each infection. The thresholds for each disease are recommended by China CDC. Early warnings in the form of real-time SMSs are followed by a field investigation to rule out avian influenza, SARS and MERS. The SMS system maintains a list of mobile phone numbers of all epidemic staff at CDCs at the national, provincial, city and county levels.

It may be true that in spite of having the infrastructure outlined above, China was slow to respond when the Wuhan outbreak happened. In fact, several studies of China’s disease surveillance infrastructure point out that although physicians are required to report pneumonia of unknown etiology, there is evidence of under-reporting. However, the purpose of the system is to detect clusters of pneumonia that indicate an outbreak. It gives the administration a better chance to react fast.

In contrast, India’s disease surveillance infrastructure is coordinated through the Integrated Disease Surveillance Programme (IDSP) but is beset with limitations. According to a roundtable discussion between healthcare experts organised by Carnegie India in December 2019, the disease surveillance infrastructure model in India lacks uniformity of case definitions, standards and practices at the state and national levels. Also, there was a lack of coordination among competing organisations that resulted in ineffective disease mapping. Additionally, a research article published by NITI Aayog pointed out the absence of accurate data on infectious disease burden in India.

In any scenario, there is consensus on what ought to be India’s biggest learning from the coronavirus experience: invest heavily in disease surveillance at all levels.

In the current coronavirus crisis, digital surveillance and data analytics have emerged as important tools in epidemic control. China was fortunate in this matter, and gained time by turning to the massive amounts of data collected by companies like Tencent and Alibaba to perform contact tracing. These companies actually have a better idea of population and migration patterns than the Chinese government. Leveraging this data enabled orderly contact tracing of infected citizens and at-risk individuals.

On the other hand, many countries battling the coronavirus have given up on contact tracing fairly quickly although it is an effective, inexpensive and very basic public health intervention, compared to policies like social distancing, which have great economic costs.

Measures to trace the location and movement of millions of mobile phone users were put into place as early as February 11 in Hangzhou by Chinese companies Alibaba and Tencent. For instance, Ant Financial’s QR code system assigns users one of three colors -- green, yellow or red -- based on the user’s basic healthcare information, travel history and location. The close-contact detector apps use big data from public authorities about train and air travel history and disease case records to check if the user has been in contact with an infected person. A green code permits freedom of movement, while yellow and red indicate that the user must self-quarantine or enter supervised quarantine. The right of admission into cafes, malls and other establishments is conditional on what code you have been assigned at that moment.

Beijing’s initial response to the Wuhan outbreak is being questioned but the agility of its action in that city in the third week of January is widely acknowledged. After more than 100 cases were detected on January 21, mobility controls were announced in Wuhan on January 23: the airport was closed; bus, subway and train services were halted and private cars on roads were banned except essential services. The lockdown measures were put in place days before the Chinese New Year holiday, when millions of people travel around and out of the country. By 24 January, travel restrictions were extended to 12 prefecture-level cities in Hubei.

In a study published in the journal Science, researchers estimated that the lockdown and mobility controls prevented 700,000 additional coronavirus cases and gave 130 cities extra time (3-5 days) to prepare for the outbreak. The scale and agility of the lockdown involving 60 million people in Hubei has been the subject of much awe, but mobility controls went beyond a lockdown.

Keeping people indoors meant supplying supermarkets and stores with enough food to ensure people didn’t have to leave their homes. In India, we have witnessed the exodus of millions of migrant labourers shortly after a lockdown was announced because they were not assured of food, residence and essential services in the cities. Anticipating that people would hoard food items and venture out of their homes in search of essentials, the Chinese government emphasised the uninterrupted flow of vegetables and fruits into Hubei.

The city of Shouguang, in Shandong, is the country’s most important hub for growing, trading and shipping vegetables. The city is critical to China’s food production and distribution, so much so that the daily benchmark of national produce costs is called the China Shouguang Vegetable Price Index. Shouguang produces 4.5 million tonnes of vegetables every year and even more produce moves through its wholesale markets to reach other parts of China. Shouguang activated emergency plans to continue producing and delivering vegetables into Wuhan after it was asked to deliver 600 tonnes of fresh vegetables to Wuhan everyday for two weeks starting on 29 January. Officials also coordinated with provinces around Hubei to amass a reserve of 60,000 tonnes of vegetables and readied 10,000 tonnes of frozen pork in Shanghai that could be sent to Wuhan anytime. To facilitate the distribution of fresh produce, the government exempted food delivery trucks from travel restrictions and cracked down on price gouging at supermarkets in Wuhan.

The author is a China scholar and former research officer with the Chennai Centre for China Studies.